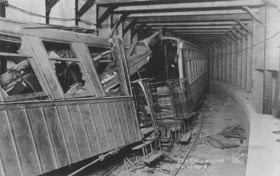 From Wikipedia, the free encyclopedia:
The Malbone Street Wreck, also known as the Brighton Beach Line Accident of the Brooklyn Rapid Transit Company (BRT), was a rapid transit railroad accident that occurred November 1, 1918, beneath the intersection of Flatbush Avenue, Ocean Avenue, and Malbone Street (now known as Empire Boulevard), in the community of Flatbush, Brooklyn. At least 93 individuals died, making it one of the deadliest train crashes in the history of the United States.

The wreck occurred the evening of November 1, 1918 at 6:42 PM, during the last days of World War I. An elevated train, consisting of five cars constructed primarily of wood, entered the tunnel portal beneath Malbone Street going toward the Prospect Park station, negotiating a curve designated to be taken at six miles per hour (9.6 km/h) at a speed estimated at between 30 and 40 mph (48–65 km/h). The trailing truck of the first car derailed, and the two following cars completely left the tracks, tearing off their left-hand sides and most of their roofs. The first and fourth cars sustained relatively minor damage, while the second and third cars were severely damaged, the third so badly that it was dismantled on the spot. The fifth suffered no damage at all. The motorman was not injured and left the scene of the accident.

The motorman was Edward Luciano, a crew dispatcher with light experience operating elevated trains, who was pressed into service during the strike emergency. He had never operated an elevated train in passenger service before. He was not familiar with the Brighton Beach Line, and his only experience moving trains was parking non-revenue trains in a train yard a year earlier. He had been taken over the line earlier by a motorman-instructor as part of his two hours of training prior to the disaster. Normally a motorman in that era received sixty hours of training before being allowed to control a revenue-generating train.

In the wake of the tragedy, Malbone Street was renamed Empire Boulevard, a name it still bears today.

I find this last fact to be creepy... deliciously so. You could walk down Empire Boulevard today and not know about the events that happened 95 years ago in that very place. It's like when a building burns down and a new one is built there. Or when someone builds a house and later they find out they built it on an ancient burial ground. I don't know why that fascinates me. It probably shouldn't. Oh well.