When I left my job last year, after a lot of prayer and thought, then embarked on a trip, then began a new job search, I knew I was abandoning "stability". However, I believed that all would turn out right in the end, and that before long, I would have a new job, and it would be a better job, and I would be able to say, "Aha! Yes! This is why all this happened!"

So this blog entry is tough because essentially I have to admit, to the world, that I still don't have a full-time job or even a half-time job. I've spent the last 4.5 months going on interviews that either go horribly awry or seem to go really well, then yield nothing. To a casual observer (or a certain close relative) it seems that I am a pathetic failure who made a huge mistake. Oh, but if only I could pop back in time and make things "right" by staying at that one job... forever?

There are lots of stories about waiting in the Bible. Joseph, David, the enslaved people of Israel, pretty much every prophet ever. God works on His own time, and that can make humans pretty impatient.

4.5 months, really, ain't much. But will I still feel hope six months from now, if I still don't have a full-time job? Or will I grow bitter?

I try to look at what blessings I have been given, even as I'm in this waiting period. Not working full-time has allowed me to devote extra energy/creativity into the 1/4-time job I do have. It has allowed me to spend extra time with my grandma and be available to take her to appointments, which has freed my mom up to spend extra time with her baby granddaughter. Not being exhausted has allowed me to spend more energy writing and studying a foreign language. I've been inspired to open an etsy shop, which has not only made me a tiny extra bit of money, but led to a re-acquaintance with an old-school-days friend.

My 1/4-time job would almost pay my monthly bills, but not quite. But the gaps have been filled by the etsy sales, a couple of Extras jobs, a number of babysitting stints, and a few things here and there. No, I can't buy LEGO sets these days or take weekend trips. Yes, I have to be very frugal. But He's providing, and I have enough.

One example of a recent blessing: I sponsor two children through World Vision, a girl in Mexico and a boy in Colombia. It had been weighing on my heart recently that I should send them each a package. I hadn't done so in over a year because sending packages to those countries requires filling out custom forms as well as paying hefty shipping fees, even for tiny little packages.

And then in January I went to the dentist, had no cavities, got to enter my name in the "No-Cavity Club" drawing for a $50 Fred Meyer gift card, won, got the gift card, and used the money to buy toys & things to fill the packages for my two WV kids. The toys + the shipping for both kids' packages added up to about $43.

It's easy to settle into a place of discouragement, especially when you're expecting something, or hoping for something, and you're being told, No... wait. For how long? 4 months? 40 years? It's not easy, because humans are impatient little buggers. But--

Okay, I'll wait. But what about the next time a certain relative tells me I'm a pathetic failure?

Trust ME. Because I've got a plan and it's going to be amazing....

Email ThisBlogThis!Share to TwitterShare to FacebookShare to Pinterest
Labels: the glorious adventure 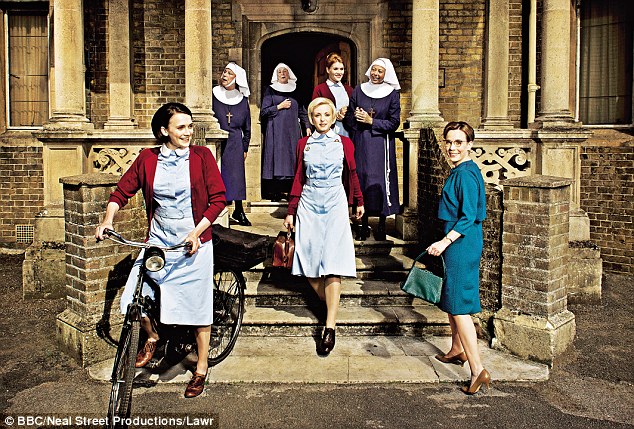 Because that's what I'm doing, and I'm rather enjoying it!
PBS.org: About Call The Midwife
Posted by molly at 12:18 PM No comments: