Laughter: The Best Medicine... Of Doom 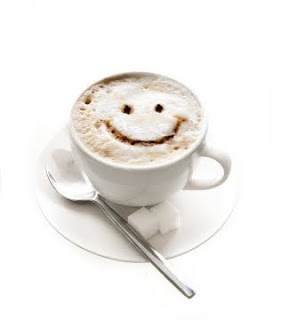 So I'm sitting in a coffee shop trying to ignore a middle-aged guy two tables away. He's sitting with a friend, and they are both laughing. But this guy in particular -- I'll call him Bill -- sounds like he's been dipping into the nitrous oxide. The laughter is pouring out of him, in all shapes, sizes, and forms (this includes cackling like a wicked witch), and I'm about ready to send some hot coffee his way. No, I don't mean buying him a drink. I mean THROW COFFEE AT HIS HEAD.

A second friend has just plunked himself down at Bill's table, which has prompted -- I kid you not -- a genuine burst of North Poleean Ho, Ho, Ho!s. Changin' it up a notch? Okay, Bill. Ack, he's varietized again! Here comes a round of Heh heh heh!s. Now I've become obsessed with counting the Hehs. I wonder, do more syllables directly correspond to more mirth? "Eh, that joke was mildly amusing. FOUR hehs, I say. Why, that last remark was especially witty! I shall bestow upon it a TEN-HEH salute! Eleven if you're lucky! And a coda of Ho, Ho, Ho!s, my good fellow!"

Laughter is a bizarre thing, if you really think about it. Sure, it comes naturally, and yeah, some people love a good laugh. But think about it -- how many other normal bodily sounds draw so many question marks from those around you? Example: Let's say you're riding a bus (buses and bodily noises go hand-in-hand, after all). The guy sitting next to you sighs. Okay, you can assume he's having a hard day. Or he's tired. No cause for concern there. Maybe the guy burps. Rude, sure, but maybe he just downed a Big Gulp. A sneeze? Allergies. Cough? He needs to clear his throat. A laugh?

OH GOD, HE'S GOING TO KILL US ALL

It's frightening! It induces paranoia! I can't just accept that maybe he suddenly recalled a funny joke from eariler. No, ten bucks says he's sitting there thinking about world domination.

I guess when it comes right down to it, if someone's laughing, I want to be in on it. I want to know what's so darn funny. And if you're planning something diabolical, by all means, keep me informed.

Also, maybe, deep down, I want to be sitting here with someone who makes me laugh the way Bill's friends are making him laugh. Maybe I need to call up my buddies for a coffee date. We'll talk and reminisce and laugh to our hearts' delight, prompting the other patrons to wonder as to our sanity.

Email ThisBlogThis!Share to TwitterShare to FacebookShare to Pinterest
Labels: a kind of a thought

Let down thy golden hair! 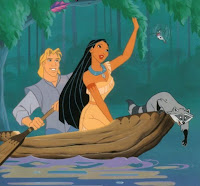 It makes me sad that I'm evidently the only one in the world who likes the movie Pocahontas. For me, it's this terrific movie about preserving nature, the importance of peace, being unselfish, and following your heart, but all I ever hear about it is how it's not historically accurate because Pocahontas never loved John Smith in real life and how she really was supposed to be 12 years old and curveless and how in reality she wouldn't have worn such a short skirt -- or any skirt at all, for that matter.

Well fine, but if you ignore all THAT....

Anyway, so Pocahontas -- the movie, not the short-skirted Native American beauty -- is going to be 15 years old this year. Pocahontas happens to be the last Disney movie I ever really got excited about. Beauty and the Beast was my first Disney obsession, and from the time that left theaters until Pocahontas came out, I longed for another movie that I could love as much. Aladdin was okay, but it just didn't give me the same feeling. Maybe because its main protagonist was male? No, no... 2/3 of my other Top 3 movies feature a male protagonist, so scratch that. The Lion King, which came out in 1994, had great music, but I didn't care for the story. Then in 1995, Pocahontas came along. And I went nuts for it. I still don't think it's anywhere near as good as BATB, but back in 1995 I was so excited for it. I got all the Burger King toys. And a crown. And stickers. And a big stuffed Meeko from the Disney Store.

Two main memories from the summer of 1995 stick out in my mind...

1) Watching Lois & Clark repeatedly while playing Tetris on my newly-acquired green Gameboy. (To this day, I still kick ass at Tetris, TYVM.)
2) Sitting in my pool in the backyard and singing the Pocahontas songs while playing with the BK toys. Which is embarrassing in that I was 14 and probably too old for that, and that the neighbors could probably hear me. O_o

One of the last animated (non-Pixar) Disney movies I ever saw in theaters was The Hunchback of Notre Dame in '96, and I actually saw it twice, but the second time was so that my cousin Sarah and I could hunt for Belle, cuz those crazy animators decided to put her in a village scene and that amused us greatly. Hunchback is a visually stunning film, even by today's standards, but the story's a bit dark and it lacks the whimsy of BATB.

And the more I think about it, the more I think what I want to see Disney make is fairy tales. Plain old, by-the-book-but-Disneyfied fairy tales. With talking sidekicks, of course, ones that are cute and brave, but for the love of all things good & pure, not sassy or lunkheaded. Or, hey, screw the sidekicks altogether... I mean, Robin Hood did okay without resorting to the inclusion of "things that talk what should not talk," right? Well, except for the animals... they all talked, but everybody in that movie was an animal (even Friar Tuck, though I'll be darned if I know exactly what he was) so I guess that doesn't count. In conclusion, this paragraph has lost all sense of direction.

I guess the main purpose of this blog entry (besides to defend poor Pocahontas) is to say I'm finally looking forward to another Disney movie. Formerly called Rapunzel, now called Tangled, I am anticipating its release with as much eagerness as a person my age can muster. (Yes, I'm 102, thanks for asking.) This one's been in the works for a few years, and they say it'll finally be out this year. And me? I'm all for it. Boy + girl + hijinks - complications = love. In November, I'll be there.