Today's Topic: The Mansion Of Happiness 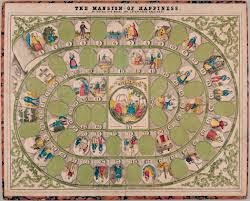 The Mansion of Happiness: An Instructive Moral and Entertaining Amusement is a children's board game inspired by Christian morality. Players race about a sixty-six space spiral track depicting virtues and vices with their goal being The Mansion of Happiness at track's end. Instructions upon virtue spaces advance players toward the goal while those upon vice spaces force them to retreat.

The Mansion Of Happiness was designed by George Fox, a children's author and game designer in England. W. & S. B. Ives published the game in the United States in Salem, Massachusetts on November 24, 1843.

Instructions upon spaces depicting virtues move the player closer to The Mansion of Happiness while spaces depicting vices send the player back to the pillory, the House of Correction, or prison, and thus, further from The Mansion of Happiness. Sabbath-breakers are sent to the whipping post. The vice of Pride sends a player back to Humility, and the vice of Idleness to Poverty.