"You've all heard of monstrous mimes and creepy clowns. Well, rounding out the Trilogy of Horror Vaudeville-any is the Demonic Dummy, otherwise known as the evil ventriloquist's doll. A ventriloquist is, as you probably already know, an entertainer who tries to convince an audience that a non-living thing (in most cases, a puppet) is alive and talking. Now this act, though odd, probably wouldn't be too offputting an entertainment — except that nine times out of ten, when a ventriloquist's puppet appears in a series or movie, it will be a hideous, dwarven creature who crawled straight out of the Uncanny Valley. The Demonic Dummy occupies a prominent place in the darker recesses of the human subconscious — it is nitro-burning Nightmare Fuel for viewers both young and old.

Classical-style ventriloquist dummies are the most popular, but anything from a sock puppet on up can fall into this category. See also Creepy Doll, Murderous Mannequin, Perverse Puppet and Consulting Mister Puppet."

Well, well, well... as intriguing as that Murderous Mannequin trope sounds, I think I have a bit to say about this one!. And by "a bit," I mean a small bit, because my memory has only offered me three examples, and two were puppets (Mr. Woodchuck and Lamb Chop) so I guess I can only think of one real dummy, and that was on Buffy The Vampire Slayer. 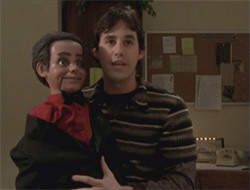 Man, I loved that show.  In an early episode, Puppet Show, this ventriloquist kid has a dummy, and right away you can tell something is not right with it. Its eyes shift. It can move. And terrible things are happening all around him. So of course, you immediately think dummy = evil. But things are rarely what they seem on Buffy. (Unless, of course, it SEEMS as if Glory = annoying. In that case, your assumption would be absolutely correct.)

I have to say, though, dummies aren't nearly as off-putting as ventriloquists themselves. I hate it how they talk without moving their lips. It's not natural. They must be stopped. And while we're at it, let's take out magicians, too. They're always hiding elephants and stuff, and it bothers me that I can't figure out how they do these wily tricks. And FURTHERMORE...