"The Wheelmobile Is Coming To Your Area"

Wheel Of Fortune auditions? Here in Oregon, at last!? I knew I wanted to go, but only if I could get some friends to go with me. So I put the word out, and within days, my cousin, brother, and sister-in-law had all agreed to accompany me. 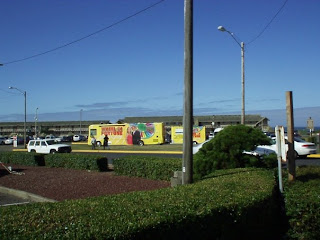 One Saturday morning in late September, we set out for the Chinook Winds Casino in Lincoln City, Oregon. The first "show", or audition, was to start at noon, and we got there around 10:30 am. Hundreds of people were already there, waiting in a snaky line inside a big white tent. Old people, young people, middle-aged... so many folks with the same dream: the dream of meeting Pat and Vanna, winning big money, and living out the rest of their days in luxury.

Orrr maybe they just had nothing better to do with their Saturday, I dunno. 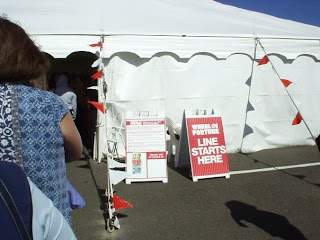 Shortly before noon, we were given small pieces of paper to fill out with our name and other vital information. On our way into the casino's auditorium, we dropped these slips of paper into a big baskety thing. We found seats toward the back of the room, and proceeded to watch the first show. (There would be a total of three that day and three the next day.) 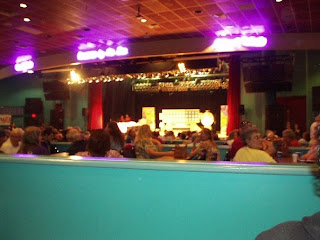 The emcee was a total Mayor McCheese who liked to put his arm around the ladies. The resident "Vanna" would draw five names and Mr. Touchy-Feely "Pat" would read off these names. Think: The Price Is Right, only with less shrieking. The chosen five got to go up and have a quick interview with Mayor McSajak. Then, together they'd play a quick game of Wheel of Fortune (sans the wheel.) After one puzzle was solved, these players would receive some sort of WOF-related prize (a T-shirt, hat, keychain, etc.) Meanwhile, the audience would cheer and try to pretend to not look bitter. This process repeated itself five or six times during the hour.

I didn't get my name called. Neither did my companions. Had we come all the way out there for nothing?

After the show ended, we got back in line to wait for the third show (the second one was already full.) We ate snacks, chatted, played hangman and twenty questions, and people-watched.

For the third show, we had much better seats. We were only about ten feet from the stage, which was great. 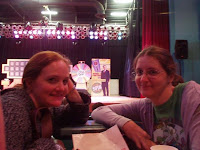 But they still didn't call our names.

Yeah. We drove all the way out to Lincoln City and didn't even get to go up on stage and audition. BUT...

We came home with Pat and Vanna talking keychains!!!