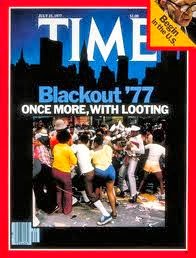 The blackout occurred when the city was facing a severe financial crisis and its residents were fretting over the Son of Sam murders. The nation as a whole was suffering from a protracted economic downturn, and commentators have contrasted the event with the good-natured "Where Were You When the Lights Went Out?" atmosphere of 1965. Some pointed to the financial crisis as a root cause of the disorder, others noted the hot July weather. (The city at the time was in the middle of a brutal heat wave.) Still others pointed out that the 1977 blackout came after businesses had closed and their owners went home, while in 1965 the blackout occurred during the day and owners stayed to protect their property. However, the 1977 looters continued their damage into the daylight hours, with police on alert.

Looting and vandalism were widespread, hitting 31 neighborhoods, including most poor neighborhoods in the city. Possibly the hardest hit were Crown Heights, where 75 stores on a five-block stretch were looted, and Bushwick, where arson was rampant with some 25 fires still burning the next morning. At one point two blocks of Broadway, which separates Bushwick from Bedford-Stuyvesant in Brooklyn, were on fire. Thirty-five blocks of Broadway were destroyed: 134 stores looted, 45 of them set ablaze. Thieves stole 50 new Pontiacs from a Bronx car dealership. In Brooklyn, youths were seen backing up cars to targeted stores, tying ropes around the stores' grates, and using their cars to pull the grates away before looting the store.While 550 police officers were injured in the mayhem, 4,500 looters were arrested.

During the blackout, a number of looters stole DJ equipment from electronics stores. As a result, the hip hop genre, barely known outside of The Bronx at the time, grew at an astounding rate from 1977 onward.

For some reason, whenever I think about New York in the 70's, I picture Sesame Street. Not the Muppets, exactly, but the actual street, with all the friendly neighbors hanging out and Oscar grumbling in his trash can and kids sitting on the steps and Mr. Hooper selling his wares.

It's hard to imagine the chaos that must have been seen, heard and felt during those crazy summer days in actual New York (not on Sesame Street) way back when.

Of course, there are pictures. Crimes captured on film and -- so many years later -- posted to the internet for all to see and for some to say, "Hey... that guy looting those stereos... isn't that Grandpa?" o_O
Posted by molly at 12:55 PM