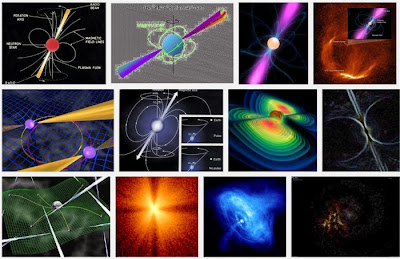 A pulsar (portmanteau of pulsating star) is a highly magnetized, rotating neutron star that emits a beam of electromagnetic radiation. This radiation can only be observed when the beam of emission is pointing toward the Earth, much the way a lighthouse can only be seen when the light is pointed in the direction of an observer, and is responsible for the pulsed appearance of emission. Neutron stars are very dense, and have short, regular rotational periods. This produces a very precise interval between pulses that range from roughly milliseconds to seconds for an individual pulsar.

The precise periods of pulsars makes them useful tools. Observations of a pulsar in a binary neutron star system were used to indirectly confirm the existence of gravitational radiation. The first extrasolar planets were discovered around a pulsar, PSR B1257+12. Certain types of pulsars rival atomic clocks in their accuracy in keeping time.

The first pulsar was observed on November 28, 1967, by Jocelyn Bell Burnell and Antony Hewish. The observed emission from the pulsar was pulses separated by 1.33 seconds, originated from the same location on the sky, and kept to sidereal time. In looking for explanations for the pulses, the short period of the pulses eliminated most astrophysical sources of radiation, such as stars, and since the pulses followed sidereal time, it could not be man-made radio frequency interference. When observations with another telescope confirmed the emission, it eliminated any sort of instrumental effects. At this point, Burnell notes of herself and Hewish that "we did not really believe that we had picked up signals from another civilization, but obviously the idea had crossed our minds and we had no proof that it was an entirely natural radio emission. It is an interesting problem—if one thinks one may have detected life elsewhere in the universe, how does one announce the results responsibly?" Even so, they nicknamed the signal LGM-1, for "little green men" (a playful name for intelligent beings of extraterrestrial origin). It was not until a second pulsating source was discovered in a different part of the sky that the "LGM hypothesis" was entirely abandoned.

When two massive stars are born close together from the same cloud of gas, they can form a binary system and orbit each other from birth. If those two stars are at least a few times as massive as our sun, their lives will both end in supernova explosions. The more massive star explodes first, leaving behind a neutron star. If the explosion does not kick the second star away, the binary system survives. The neutron star can now be visible as a radio pulsar, and it slowly loses energy and spins down. Later, the second star can swell up, allowing the neutron star to suck up its matter. The matter falling onto the neutron star spins it up and reduces its magnetic field. This is called “recycling” because it returns the neutron star to a quickly-spinning state. Finally, the second star also explodes in a supernova, producing another neutron star. If this second explosion also fails to disrupt the binary, a double neutron star binary is formed. Otherwise, the spun-up neutron star is left with no companion and becomes a “disrupted recycled pulsar”, spinning between a few and 50 times per second.

Ahhh I love astronomy. How can you not love learning about all the crazy things that are going on up there? Comets and meteorites and planets and black holes... okay, not black holes so much. Yeah, um, so back in my school days, when it seemed like they were always showing us filmstrips about terrible things happening, we watched one about black holes and I began to routinely fear that I would be sucked into one. You know, randomly, just walking along one day and then suuuuck, that would be it -- I'd get all stretched out taller than Robert Wadlow and then go floating around the universe in a state of limbo forever. Because that was what black holes did. And they must be a serious threat to us, or why else would our teacher be showing us a film about them? (It couldn't be because they just wanted to silence 27-odd brats for half an hour while they graded papers, course not.)

Email ThisBlogThis!Share to TwitterShare to FacebookShare to Pinterest
Labels: all about everything, childhood memories