(Teetotums having nothing, I repeat, nothing to do with Teetotalers, although one could presume teetotalers used teetotums for fun & general amusement.) 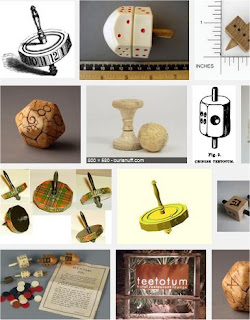 A teetotum (or T-totum) is a form of gambling spinning top. It has a polygonal body marked with letters or numbers, which indicate the result of each spin. In its earliest form the body was square (in some cases via a stick through a regular six-sided die [1]), marked on the four sides by the letters A (Lat. aufer, take) indicating that the player takes one from the pool, D (Lat. depone, put down) when a fine has to be paid, N (Lat. nihil, nothing), and T (Lat. totum, all), when the whole pool is to be taken.

The teetotum survives today as dreidel, a Jewish game played on Hanukkah. Some modern teetotums have six or eight sides, and are used in commercial board games in place of dice. The original 1860 version of The Game of Life used a teetotum in order to avoid the die's association with gambling.

Reading further on the subject, I learn that dice used to be considered evil and tainted, and that good, respectable folks did not play games with those cubed fiends.

I'm glad that sentiment has pretty much died over the years, because think of how hard it would be to play Yahtzee if you have to spin five teetotums? THINK!
Posted by molly at 11:04 PM

Email ThisBlogThis!Share to TwitterShare to FacebookShare to Pinterest
Labels: all about everything, games