Goodbye To The Summer (Olympics)

I'm going to miss watching the Olympics, even though NBC showed way too much beach volleyball... and for some reason I kept missing the men's gymnastics. (Women's gymnastics isn't as good, imo. Especially the balance beam. They're always slipping off of it. That's only entertainment if you hate the gymnasts.)

My favorite thing? Swimming, duh! Michael Phelps! ADORABLE! I have a crush on a swimmer, y'all! Me and a million other girls, but oh... so exciting. Especially that race where he won by 1/100th of a second. At first you couldn't even tell who won. It looked like that other guy for sure. Then they showed Michael's name on the board - 1st! And he was so happy! He looked like a little boy, splashing the water and yelling with glee.

And we have the same initials, so that's cool.

I hadn't watched the Summer Olympics in a long time. Okay, maybe an event here and there, but nothing like my viewing this year. In 1988, I remember being at my aunt and uncle's house and watching the Olympics there. And I have vague memories of the events that took place in 1984. Well, mostly I just remember Mary Lou Retton was on the Wheaties box. 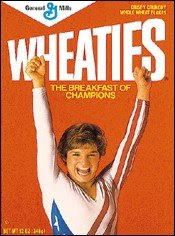 Hey, I was three. I'm lucky I can remember that much!

When my brother and I were younger we used to have games for the Commodore 64 called "Summer Games" and "Winter Games," and you basically got to pick a country and then compete in various Olympic sports as a representing member of that country. Of course, this was back when you had to do everyhing with a joystick and a button. As you can probably imagine, the iceskaters fell down a lot, the horses fell down a lot, the javelin throwers would impale themselves... and we'd get frustrated rather quickly.

But my memories are fond nonetheless.
Posted by molly at 12:02 AM No comments:

What do you think of when you hear the words "Summer Olympics"? Do you think about beach volleyball? Pole vaulting? Diving? Gymnastics? 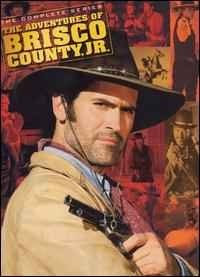 
I turned on the TV today and immediately heard the theme song for The Adventures Of Brisco County, Jr. But Bruce Campbell was nowhere in sight. Instead it was an Olympics commercial for NBC.
Because nothing says "Olympics" like the conjuring of images of a rough-riding bounty hunter who talks to his horse.

Come to think of it, there were a few episodes where Brisco had to go up against Chinese warriors. Hey, maybe it all makes sense after all.
Posted by molly at 4:21 PM No comments: