Goin' To Disney World: A look back at five 90's TV shows that went there

Imagine, for a moment, that you are the head writer of a situational comedy circa the 1990's. Your show's been on the air for five seasons and you're starting to run out of ideas. You need an exciting new development -- a plotline that will get those viewers excited.

Here are your choices: 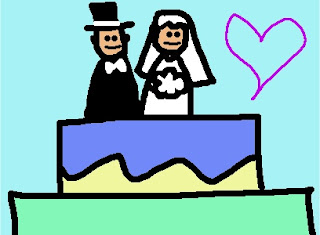 Marriages are good for ratings, but you have to work up to them. Characters meeting, dating, first kiss, sleeping together, commitment issues, meeting the in-laws, all that stuff.

Want something quicker? How about... 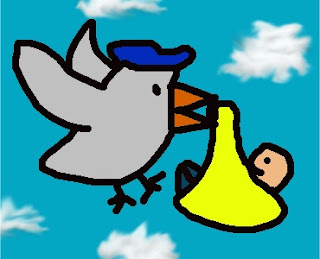 This is the perfect plot device if you already have to characters who are married or together. Babies have been known to breathe life into dying sitcoms. They're especially nifty if your lead actress is pregnant or if she's old but wants to feel young. Don't believe me when I say a baby is quicker than a marriage? Look, if you announce the pregnancy in May, you can pop the kid out during November Sweeps. What's going on in those in-between months? Summer hiatus! You'll only have to slap together one episode about mood swings and maybe one about Lamaze. Then you deliver the kid amidst chaos and hilarity (someone passes out, someone gives birth in a hot air balloon) and you're done. Insta-baby! Be sure to hire some twins.

The downside? Well, now you actually have to write the new kid into the show, and since babies are pretty boring from ages 0-3, at least in sitcom land, you'll have to either stick them in a closet or Chrissy Seaverize them, and that can be more trouble than it's worth. You'll have viewers asking those dreaded questions, you know.

So maybe you don't want to give your characters a baby. Or maybe you gave them a baby last year and you're REALLY desperate for new ideas. There's only one thing left to do:

Send your sitcom family to... 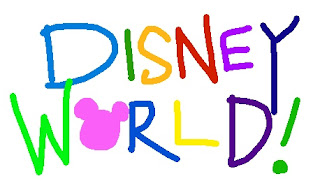 Hey, all the other sitcoms are doing it. Go ahead, pen a Disney-centric plotline. Be sure to include every member of the freaking cast, be they a neighbor or a co-worker or a cousin. No castmember left behind!

Now you've got, what -- twelve, thirteen characters to work with? Great! Give each of them their own unique, wacky Disney World adventure. Make sure someone goes to EPCOT, because those Disney folks might get upset if you don't represent the entire park complex. Bonus points if the characters look like they're having the time of their lives in EPCOT.

Logistics? Who needs 'em! So your sitcom characters are poor as dirt -- you can still stick them in the fanciest hotel and have them order room service. Do not show your characters waiting in line for rides. Everyone knows there are no lines at Disney World. And be sure to have your characters meet and interact with as many Disney pals as possible. Because at Disney World, Cinderella, Prince Charming, Pluto, Goofy, Donald Duck, Mickey Mouse, Minnie Mouse, Aladdin, and Winnie The Pooh just wander around the park, doing favors for the guests. Want to hug one? Don't be silly, you won't have to compete with a swarm of snot-nosed kindergartners. The Disney characters are there for YOU.

Very important: End the episode at night, with a backdrop of fireworks. Make sure your characters have a front-row seat at the fireworks show, even if they arrive there five minutes before it starts. Select two compatible characters. Have them kiss. The end.

Go on now, pen that script. So it's been done before. Who cares? Your network is owned by the Disney corporation, you can do whatever you want! GO, I say!

A BRIEF HISTORY OF SHOWS THAT HAVE GONE TO DISNEY WORLD

Full House went to Disney World in 1993. Family Matters took a trip in 1995, and within the next two years, four others -- Step By Step, Boy Meets World, Second Noah, and Roseanne, followed suit. Sabrina The Teenage Witch was one of the last to jump on the Disney bandwagon, traveling to the Magic Kingdom in 1998.

I have not seen the Family Matters or Sabrina Disney World episodes, but I have seen -- and have access to -- the other five. Those five are what I will be discussing. I'll start with Boy Meets World and Second Noah, because their Disney World episodes were pretty low-key and they did not send the entire family. 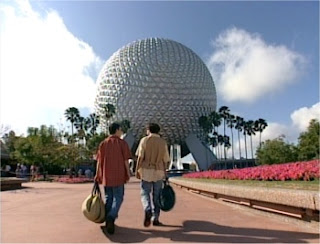 Topanga, Cory's ex (who he still loves) wins a trip to Disney World, along with two other classmates. One of those is a boy who would like nothing more than to woo Topanga. Cory, intent upon getting Topanga back, makes a spontaneous trip to Florida -- bringing Shawn along with him -- and then begins to stalk Topanga, sending her gifts and messages. 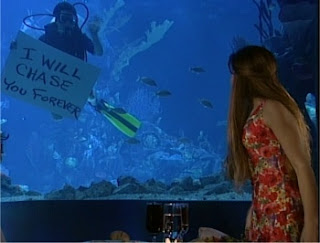 Cory's doing it out of love, but Topanga finds it incredibly obnoxious. She thinks Cory is trying to show off; she doesn't believe he's really sincere. 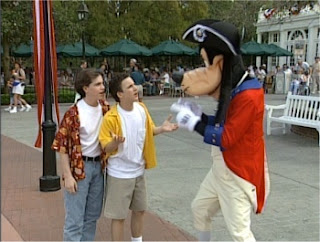 What is Cory to do? 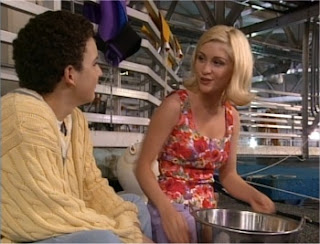 After a random encounter and conversation with Dana from Step By Step, Cory pours out his heart to an aquatic animal and is overheard by Topanga, who realizes Cory sincerely loves her.

After months of being apart, Cory and Topanga get back together. And they kiss. 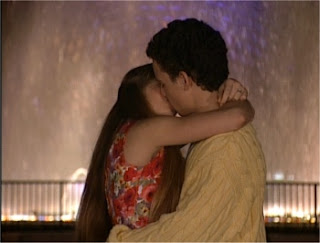 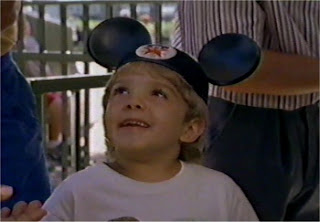 This short-lived family drama featured Disney World in a two-episode storyline, mostly just using DW as a backdrop for the plot and not really going crazy with the rides and the Disney characters like others shows were wont to do. Second Noah was set in, and filmed in Florida, so it didn't seem unnatural for them to be going there, and only a few members of the family went.

Much of the Disney story revolves around Ben (above) who is obsessed with Mickey Mouse and manages to run away from his parents at Disney World, hoping to find the elusive mouse. 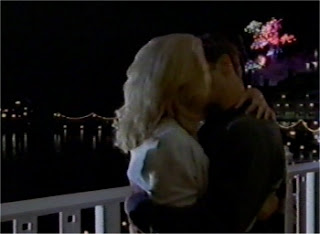 Later, his parents make out. With fireworks.

Now that I've glossed over the two shows whose characters made a brief stop at Disney World, it's time to talk about three sitcoms that took an all-out family vacation to the land of the Mouse: Full House, Step By Step, and Roseanne. 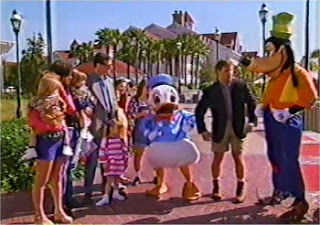 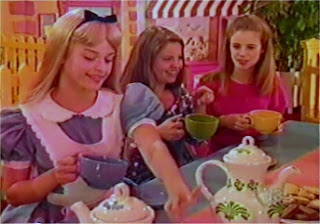 Why they go to Disney World: It starts with Jesse's band being scheduled to perform there. Jesse invites Becky, Nicky and Alex. Then Joey thinks it would be great if he and Jesse could do their radio show from there. Danny hears about this and decides to take his daughters along as well. Kimmy's parents, who shockingly don't want her around, agree to pay for Kimmy's ticket. Vicky joins the family later. Steve, who misses DJ incredibly, finds a way to get to Florida too. 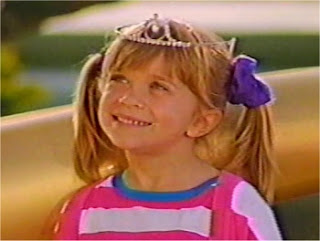 How they own Disney World: Michelle wins a contest and gets to be Princess For The Day. She is granted three wishes. The Tanners get to go to the front of every line. They have tea party with the Disney characters. They all ride in the parade.

*Michelle acts like a spoiled brat. Not that this is anything new. 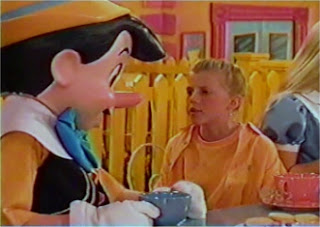 *Stephanie is bitter and jealous over Michelle's princess status.

*Michelle runs away. (Again, nothing new.)

*Danny keeps trying to ask Vicky to marry him, but is constantly interrupted. 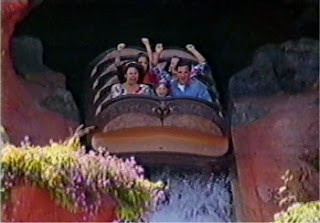 *Jesse is so busy with rehearsals and his radio show that he isn't spending enough quality time with Becky. Becky becomes angry. Jesse sings a song for her and everything is all right.

*DJ misses Steve like crazy, and begins to hallucinate him in random Disney characters. 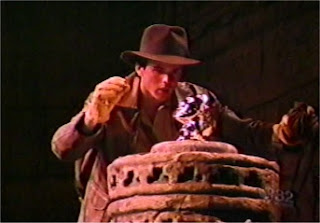 Major Developments: Vicky accepts Danny's marriage proposal; however, their relationship only lasted another seven months. DJ's and Steve's would end within the next year, too. Is there something to this?

Who makes out amidst fireworks: Danny & Vicky, Steve & DJ 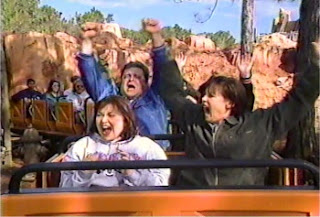 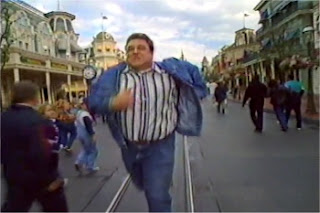 Why they go to Disney World: Dan retires or quits his job or something and winds up with a lump of money. He thinks they need to invest it wisely, but Roseanne has other ideas.... 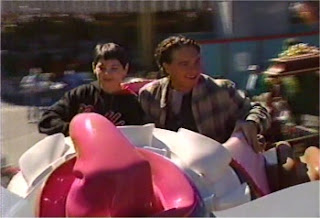 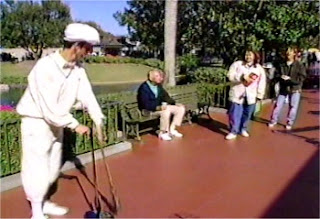 How they own Disney World: Despite the fact that they leave their hotel a mere 15 minutes before the park opens, they are at the front of the crowd waiting to enter the park. Roseanne and Jackie get amusement from messing with the perky park employees. Darlene makes friends with Winnie The Pooh. 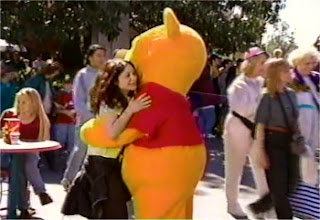 Conflicts: At first, Darlene wants nothing to with the park, acting sullen and bored. Eventually she has a change of heart.

Major Developments: Darlene and David conceive their child on this trip, though we won't learn of this for a few more episodes.

Who makes out amidst fireworks: Dan & Roseanne 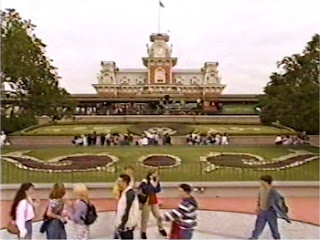 Flash -- a guy who works for Frank 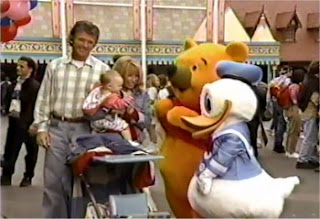 Why they go to Disney World: Frank's mother randomly decides to be generous and takes the entire family on a trip to Disney World. Rich takes a bus to Florida to stay with the family, and Flash stops by to return a hammer to Frank and ends up staying. 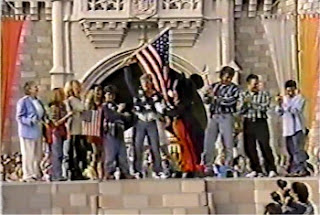 How they own Disney World: Flash decides to try to set a new world record for visiting all the attractions in all the Disney parks, eating at all the food stands, and buying a souvenir at every kiosk. He is aided by Mark, who is allowed to spend his vacation inside the Disney World control center, keeping an eye on Flash via video cameras and communicating with him via walkie-talkie. Flash is even permitted to substitute for Indiana Jones at the stunt show when the regular actor can't make it. 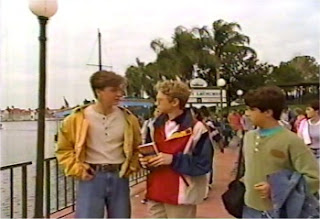 *Karen decides to enter a singing contest, and wants Al and Dana to be her backup singers... but they don't want to rehearse as much as she does, and they all fight.

*The sleeping arrangements leave much to be desired.

*Frank and Carol are hard pressed to get any time alone (this trip coincides with their anniversary).

*J.T. and Rich spend all but $11 of their hard-earned money trying to impress a couple of girls.

Who makes out amidst fireworks: Frank & Carol 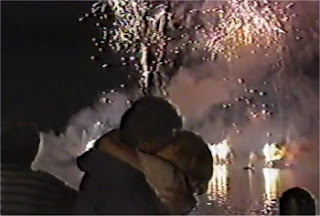 So there you have it... everything you need to write an episode about TV characters going to Disney World. You have the rules, the history, and you even have photos for reference. Now all you need is a time machine to take you back to when these crazy episodes were actually the norm. 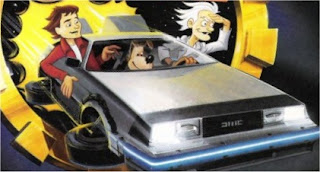 Adapted from an article posted on my old website, AlligatorJuice.com, on December 30, 2006.