Back in the days of yore (and by yore, I mean high school) I used to list my favorite TV shows (in order, natch) in my diary.  I'd do an entry for this every so often -- sometimes within a matter of weeks, sometimes months.  Certain shows held their places firmly over time, some new ones got added, and others were discarded and forgotten.  It's funny to read those entries now and see what shows I was watching as a teenager.  Annnnd also a little embarrassing.  But you know what?  I haven't made one of those lists in a long, long time.  So darnit, I'm going to do one.  Are you ready?

My Top 5 Shows That Are Currently Airing (Or Have Aired Within The Past 6 Months), Regardless Of Whether Or Not I'm Caught Up With All The Episodes...

My Top 5 Shows That Have Aired Episodes In The Past Decade, But Aren't On Anymore...

My Top 5 Shows That Haven't Aired In Ages But That I Own On DVD Or Watch In Some Other Way And Still Really Enjoy...

My Top 5 Classic Shows That Aired Before I Was Old Enough To Really Watch Or Appreciate Them, But That Amuse Me Now...

1. Quantum Leap
2. Road To Avonlea
3. Hardy Boys/Nancy Drew Mysteries
4. Star Trek: The Next Generation
5. Little House On The Prairie (well, I did watch it as a kid, but it frightened me. not so much now.)

indiana jones and the adventures of the holy sippy cup

I love Rifftrax, and I love Indiana Jones (well, Last Crusade, at least. Okay, the others are all right. Except for... oh, nevermind.)  So when the folks at Riffrax decided to run a contest for a remixed riff of... well, something, I decided to bask in the awesomeness that IS the "finding the grail" scene.  Once I had picked out the scene, I had to extract Riffs from various... uh, tracks... which meant I had to listen to them first, to decide what bits of audio would work for my project.  I ended up listening (or, in most cases, re-listening) to the audio tracks for Willy Wonka and the Chocolate Factory, Titanic, Spider-Man, The Dark Knight, Harry Potter and the Sorcerer's Stone, Harry Potter and the Chamber of Secrets, Harry Potter and the Prisoner of Azkaban, Harry Potter and the Goblet of Fire, Twilight, 300, Raiders of the Lost Ark, Heroes: Episode 1-2, and Indiana Jones and the Kingdom of the Crystal Skull.  All within the span of about 10 days.  Even after all that, I still didn't feel like I had enough, so I downloaded The Sixth Sense and Lord of the Rings: The Fellowship of the Ring and listened to those as well.  I'm not saying I'm not psychotic.  I'm just asking you not to judge.  I mean, it was for a contest, okay?  I could win.  Not that I even care anymore, now that my frain is bried.

In The Hood 2: The Hoodquel

Well, I finally got around to renting it, and I must say... I liked it.  Which is not to say R.C. has totally redeemed himself -- he still has that "Oh, just love me, love me do!" expression on his face all the time, which is kind of obnoxious.  But there's this one scene where he totally rides in and saves the day, and Marion's all "Wooeee baby!" and, admittedly, I also made such an exclamation.  Speaking of Marion, Cate Blanchett made me forget about her part in Indiana Jones 4.  So we'll just wipe that off her slate and call it good, mmkay?

Now, what of the plot?  It's really more of a Robin Hood Begins kind of movie.  Or... it would be if Robin wasn't about 47.6 years old. That's not what I'd call any kind of beginning, unless you happen to be Methuselah or Old Rose from the Titanic.  In that case, I guess Russell Crowe would be considered an infant by comparison.  But where was I going with this?  Oh yeah, so the whole movie shows us how Robin went from being a soldier in the Crusades to becoming an outlaw.  In the BBC show, that took roughly one episode.  In the Kevin Costner movie, it took 20 minutes.  In the Disney movie, he already was an outlaw.  So I guess it's kind of interesting to see more about that progression and...

Oh, yawn, who am I kidding?  I want to see Robin robbing the rich, assisted by merry men and clever booby traps, darnit!!  When this movie ended, even after 2 hours, I was like, "But... but wait!  No!  Why are there credits here?  It's not over!  Curse you, Ridley Scott!"  Speaking of Ridley Scott, did you know he was the executive producer of Monkey Trouble?  I don't know what that has to do with anything, I'm just saying.

Overall, it was a fine version of the beloved story, and what it lacked in hot guys, it made up for in music and cinematography.
Posted by molly at 9:55 PM No comments: 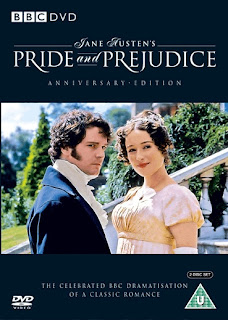 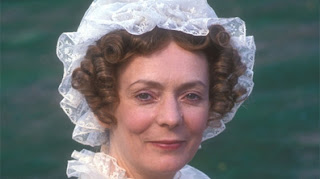 Mrs Bennett: "Blah blah blah, I just KNEW everything would turn out all right with Lydia and Wickham!  I don't care that my brother had to pay out a million tuppence for her safe return; let's plan what color taffeta she should don for the big day!  Eeeeeeeeeeeeeee!"

My Mother: "No, then it would've been called Pure Stupidity." 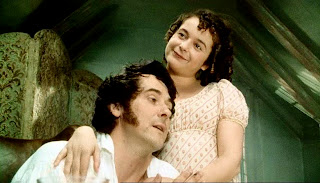 Lydia: "I'm the first to be married and the youngest of all of you, my sisters!  HAHAHAHA!  What a laugh!  I'm sure you're all so very jealous of me!  Rolling on the floor laughing out loud, bitches!!!1"

Me: "There are four of them and one of her.  You think they could take her?"

--When Jane asks Elizabeth when she first started noticing she was falling in love with Mr. Darcy--

Elizabeth: "...But I believe I must date it from my first seeing his beautiful grounds at Pemberley."

Me: "Well, except that by 'beautiful grounds,' she really means 'his hot wet bod.' 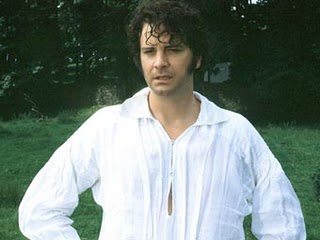