Okay, this is late because as I was typing this up on Sunday my computer decided to completely die. One minute it's letting me blog, and the next minute, it is dead. Code red. Flatline.

Moral? Life is fragile, my friends. Remember-- always take a moment to hug your laptop, and never go to bed angry.

Because any day could be its last.

In that spirit, I've decide to make this week's trope: Disney Villain Death! (I know, it's a vague connection at best.) 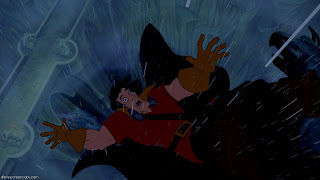 "It appears that villains in the Disney Animated Canon have an especially curious tendency to exit the film by falling off or out of things. Unfortunately for them, even though they are animated characters, they cannot defy gravity.

The varied list of things to fall from includes cliffs, over waterfalls, out of trees, and off the tops of buildings. There is at least one case of a Disney villain meeting his end by falling up (off a space ship and into space), once sideways (off the Chinese Imperial Palace by aid of a rocket), and another where a villain falls "out" by being dragged to his doom by demons."

Okay so remember in Cinderella how the evil cat Lucifer falls out the tower window, presumably to his death, after trying to screw over Cinderella by putting the mouse under the teacup, the mouse who has the key to Cinderella's room, which she totally needs in order to unlock her door and rush downstairs and prove that she fits the slipper?

Okay, you don't remember. But trust me on this. He falls out.

But good old Disney decided to make a couple of sequels to Cinderella...


Yes, these are actual movies that exist. *moment of silence*  But the point is, in the sequels we find out that LUCIFER LIVED.

So if the cat could survive a fall from a high tower, maybe that means...

*Mufasa is ALIVE! Yep! Turns out he was only sleeping! He's a kittycat; they do that. Now, as to where he went after that emotional scene with Simba, I really don't know, but isn't there a Lion King 4 just itching to be made?

*Frollo is ALIVE! That yellow liquidy stuff was't FIRE! It was just honey! And I'll betcha he was quickly rescued by Pooh in a canoe! He's currently plotting a kickass return, so just you wait!

*Gaston is ALIVE! Unfortunately, that fall into the ravine left him severely disfigured, and not only do the Ditz Triplets now reject him (they're shallow like that) but Belle doesn't recognize him for who he is, and when Gaston, in his tattered clothes, comes to the door of the castle and asks for shelter from the bitter cold, Belle and the Prince HAVE TO COMPLY (because remember what happened the last time? With the enchantress?) So they let Gaston in and then... DOOM.