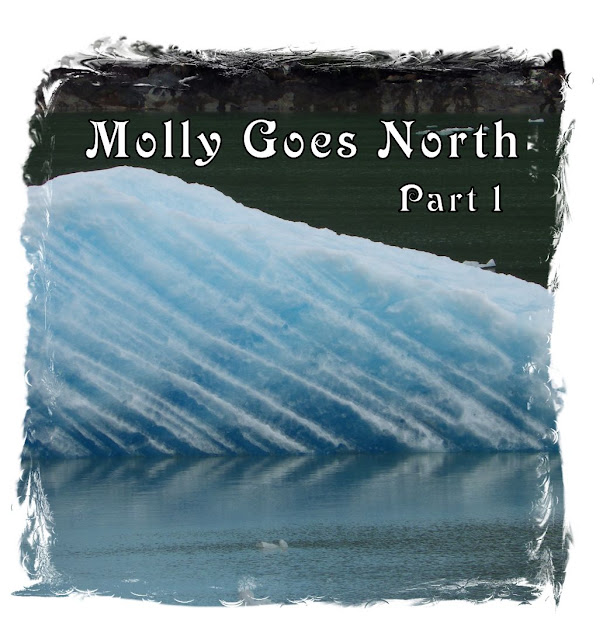 I recently returned from a 10-night trip to Vancouver, B.C. and SE Alaska. While I had been to British Columbia a few times, I'd never been to Alaska. I'm happy to report that the trip met and/or exceeded all my expectations! Everything was gorgeous, I had a great time, and now I must blog.


In preparation for the trip, I read many trip reports about cruises to Alaska. I decided the thing I wanted to see most on my trip was glaciers. And maybe bears. But mostly glaciers, since we can't see those here in Oregon. My friend Heather, who had agreed to go on the cruise with me, was looking forward to seeing whales and other sea creatures.

I wanted to spend a few days in Vancouver before the cruise, so I decided to take Amtrak (train/bus) up on August 18th. Heather opted to fly in on the 20th.

So for the first few days in Vancouver, it was just me.... 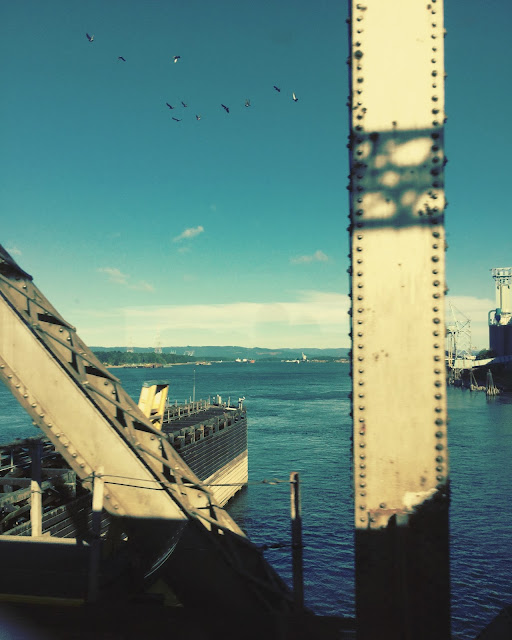 I took an 8:20 am train out of Portland. After 10 years of riding Amtrak, with a dozen round-trips from Portland to Seattle, a trek from Omaha to Chicago, a 2.5-day cross-country adventure from Chicago to Portland, an overnight jaunt from Miami to Washington D.C., and another from D.C. to Boston, not to mention a handful of shorter trips there in the mix, I finally had enough Rewards points to warrant a free, one-way trip, including -- yes -- an upgrade to business class on the 3.5-hour rail portion of the journey. 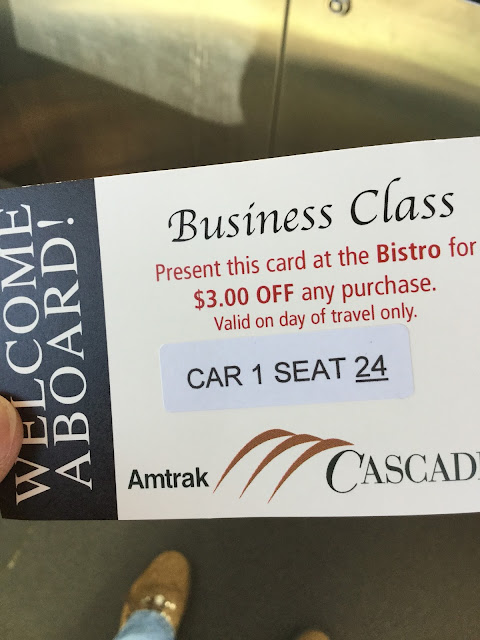 Which turned out to be one of the lamest upgrades I've ever received. Business class, pffft. The seats did not recline nor did they seem any larger than normal seats, there weren't any foot rests, and the only perks were A) I got a seat to myself, B) The Business class car was kinda near the food car, and C) I received $3 food voucher that bought me an orange juice. But hey -- at least it was free. 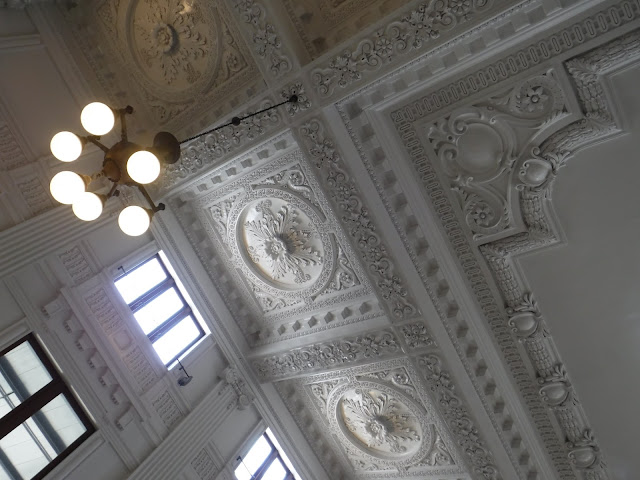 In Seattle, I had a layover that allowed me to ooh and ahh at the King Street Station interior, which they've finally finished restoring/renovating after, what, eight years?? 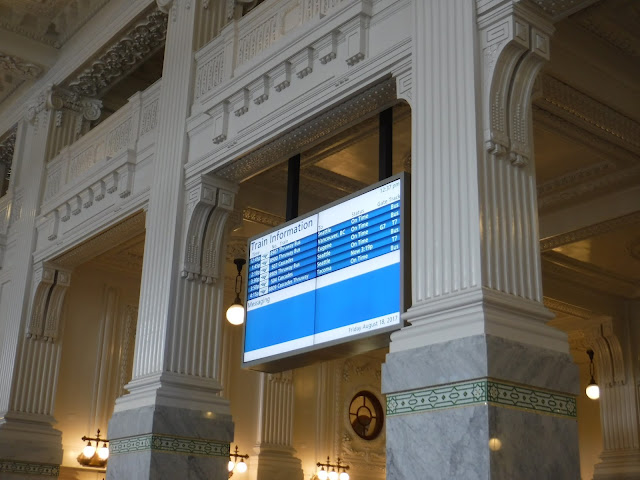 Next I boarded my bus. I managed to snag a seat near the front, and no one sat beside me, so that was swell.  The bus left about 30-40 minutes later than scheduled, and traffic was snarly throughout the greater Seattle region, so we were slow going. Upon reaching the Canadian border, we spent about an hour at customs, between waiting our turn in the bus line and going through the process. 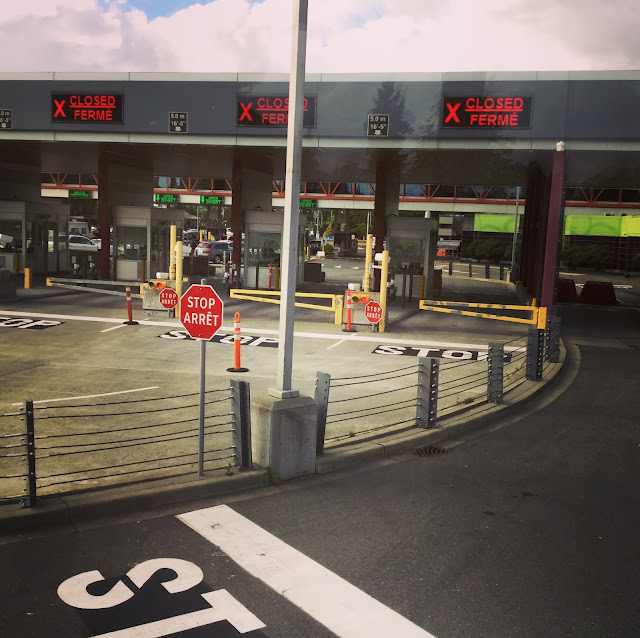 We had to take all our belongings with us into the customs place, enter the building, get asked intrusive questions, then get back on the bus. From there we proceeded to Vancouver. Between the late start, the traffic, and the delay at customs, we arrived 2 hours later than we were supposed to. (7:30 pm instead of 5:30 as scheduled.)

I took a cab from the train station to my hotel. I was glad I'd been warned ahead of time that Vancouver cab drivers are insane, because truth. My cab driver didn't even pull over to a curb to let me out, at the hotel. He just stopped and blocked the road.
.
My hotel! 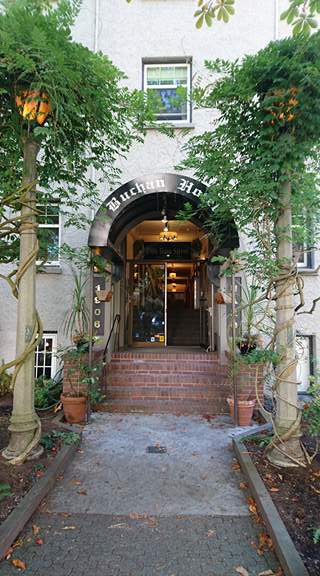 I was staying 3 nights at the Buchan Hotel in western Vancouver. It was a 2-star place, not in top shape, no A.C., and the bathroom was ridiculously tiny. If you wanted to sit on the toilet, you had to do so at an angle. And the sink was at regulation "daycare" height. But then again, the price was nice, and the hotel was within easy walking distance of Stanley Park.

After dropping off my bags, I left the hotel in search of food. There was a Starbucks a few blocks away. Later, I discovered a Safeway and some other places to obtain nutrients. But for that night, a panini and a decaf coffee were just what I needed.

There are, I hear, many fun things to do in Vancouver, and I knew I'd be unable to do all of them in less than 3 days, so I made a short list and tried to follow it. First, I knew I wanted to bike through Stanley Park. Why bike? Because walking the entire park wouldn't have been feasible, the horse-drawn carriages don't let you get on/off, and the trolley bus thing sounded okay, but wouldn't a bike be more fun?

There are numerous places to rent bicycles near the park. After reading some reviews/rates online, I went with Yes Cycle. They were great. Friendly and affordable. A 3 hour bike rental, including a helmet, basket, and lock, cost me just $15 (USD). 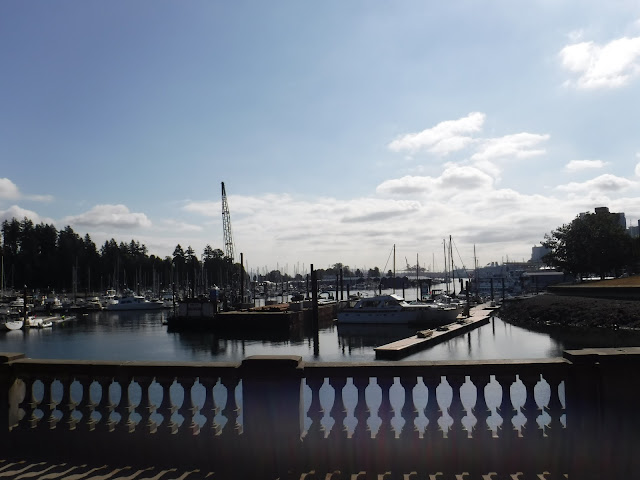 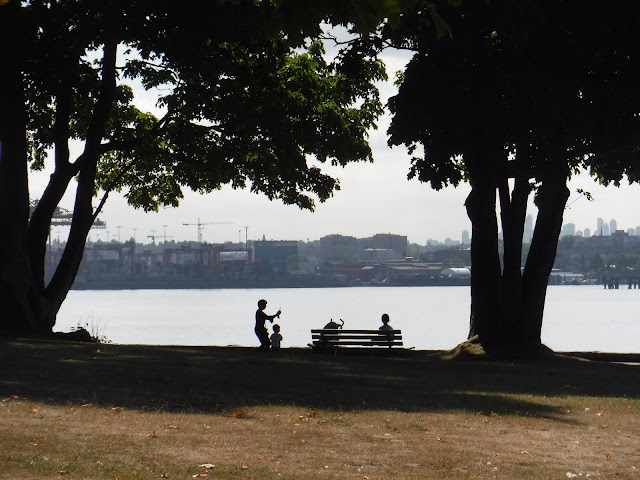 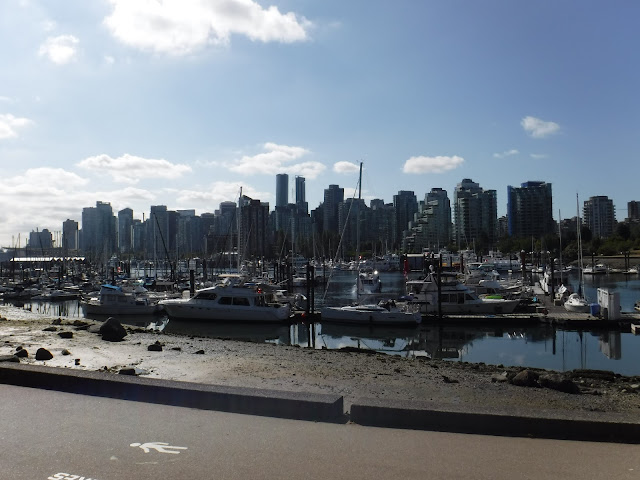 One small problem: I hadn't ridden a bike in five years, and I was super wobbly to start out. It took me a while to "relearn" the sport. 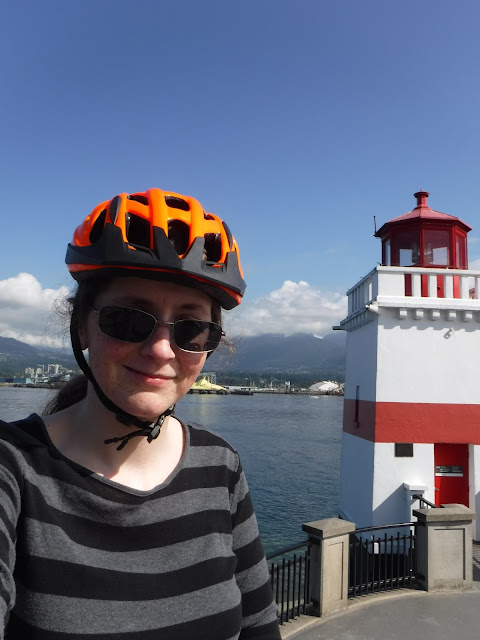 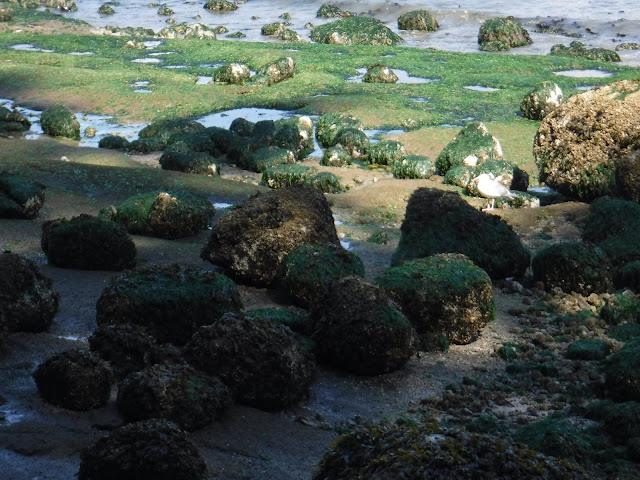 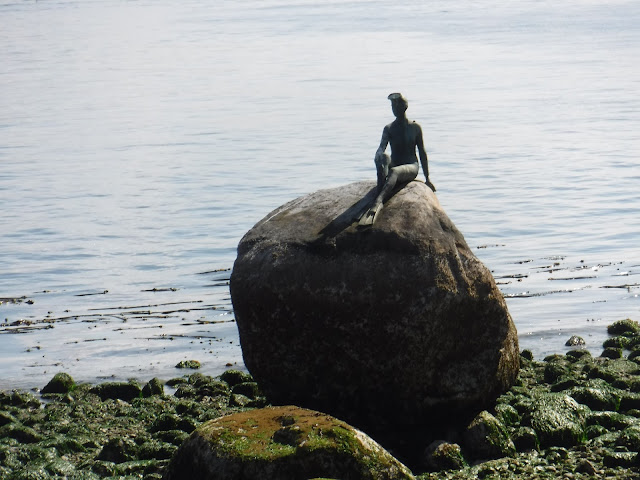 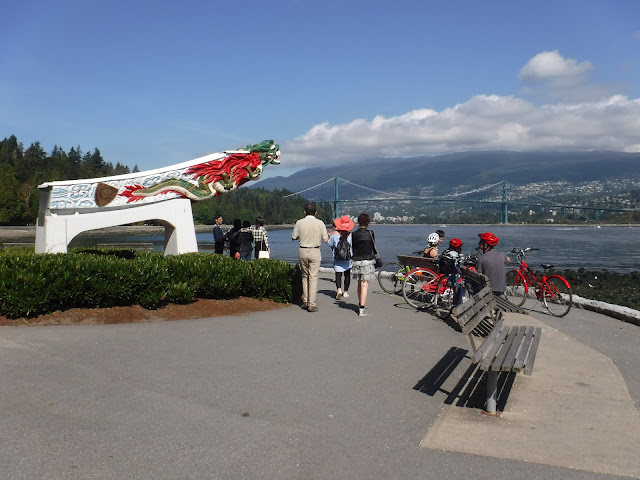 Even though I felt at ease riding after a while, that ease would vanish any time someone passed me, especially if they didn't call out or ring their bike bell first. I nearly went off the road a few times after being startled. When no one was intruding on my space, though, the bike ride was very peaceful and fun! 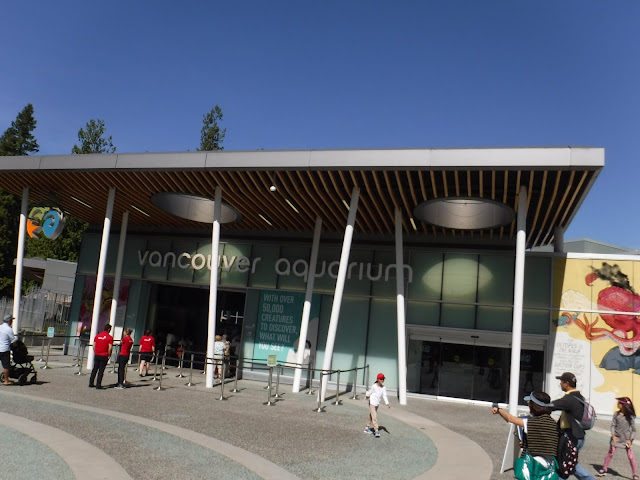 I had wanted to visit the aquarium (located within the park), but after arriving and seeing the ticket prices (which I'd viewed online, but I guess they hadn't really sunk in), I quickly left. $39 Canadian/$30 American?! Oh brother. I mean, that's on par with the Seattle Aquarium's prices, but... eh. 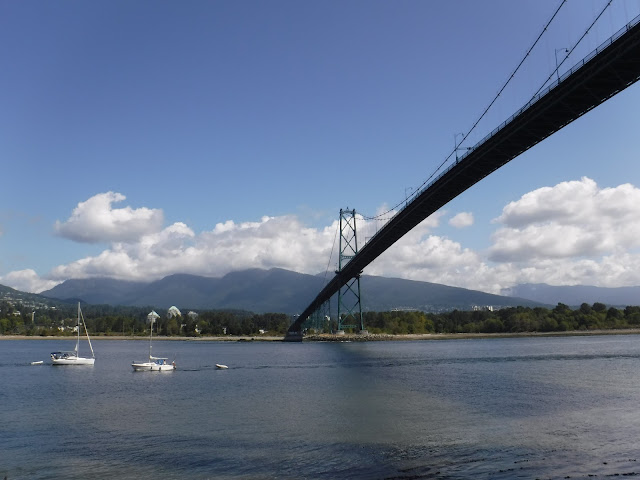 The bike route I took passed below the Lion's Gate Bridge, which I knew our cruise ship would also sail under in a few days. 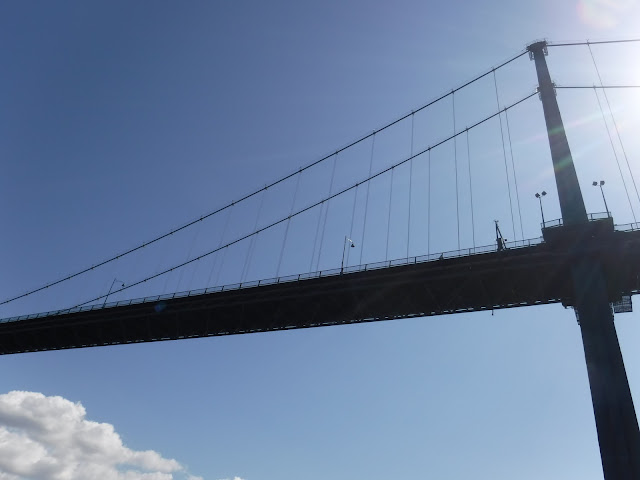 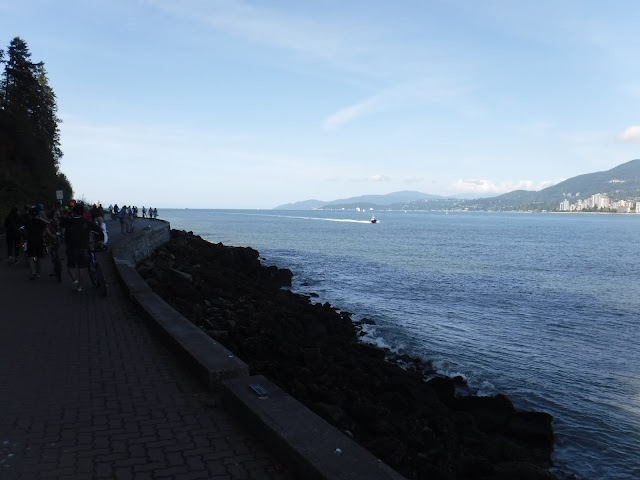 There were many interesting things to see along the way, including this beach where people had put up hundreds of little cairns (rock stacks). 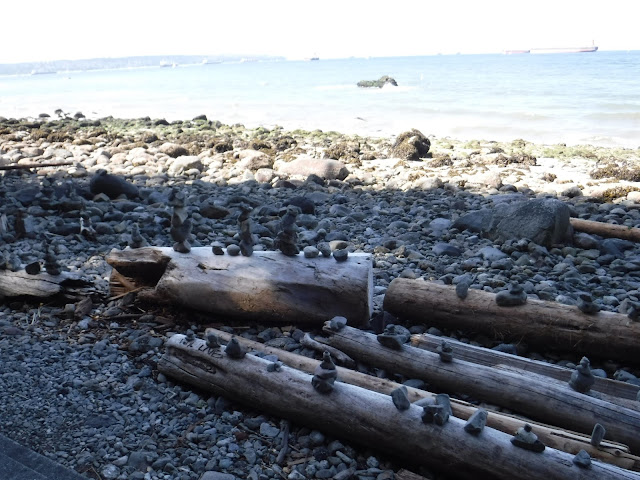 At one beach, a man was making giant bubbles. 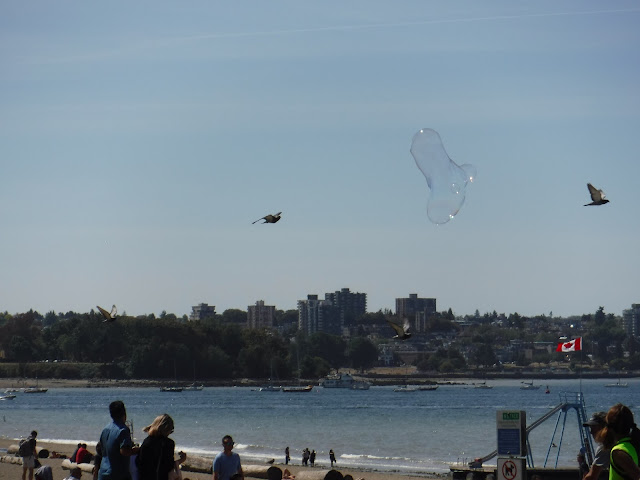 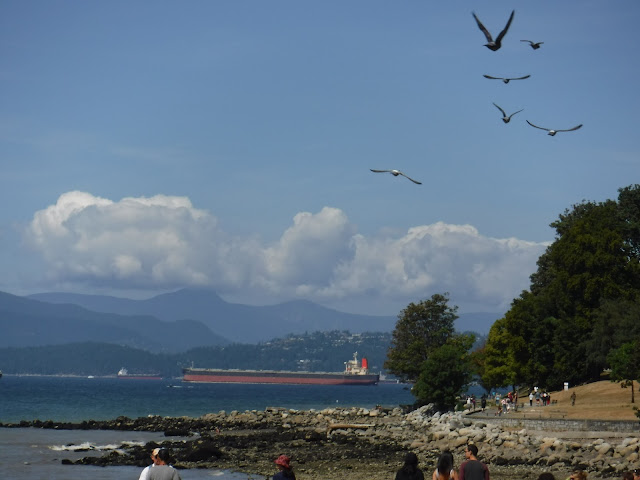 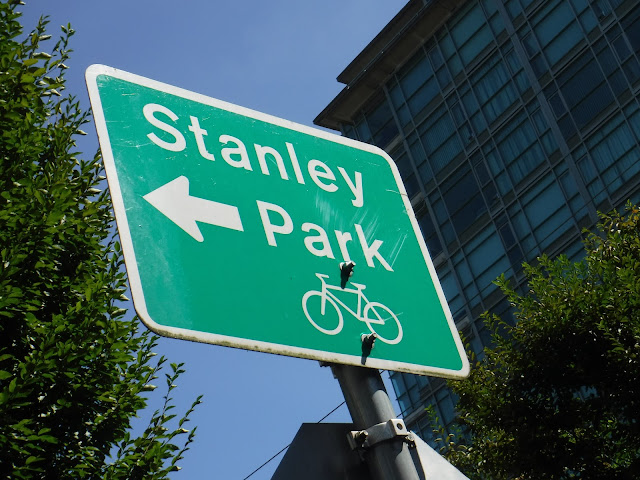 I rode for about 3 hours total. I wasn't too tired afterward, but I did need a little break, so after returning my bike, I made my way back the hotel.

A little after 2pm, I headed out again, taking a bus to the Vancouver Art Gallery.... 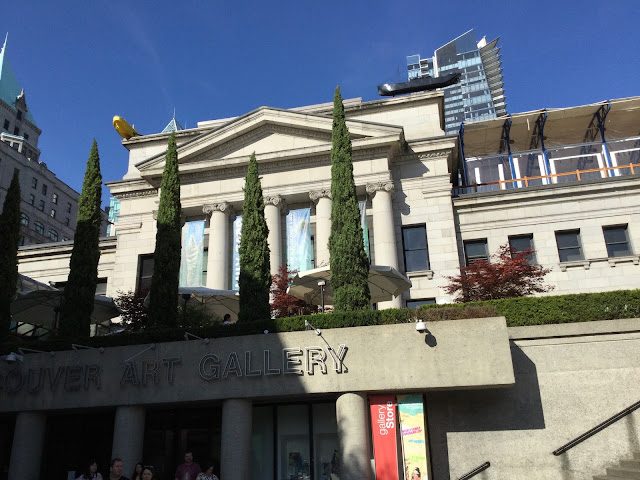 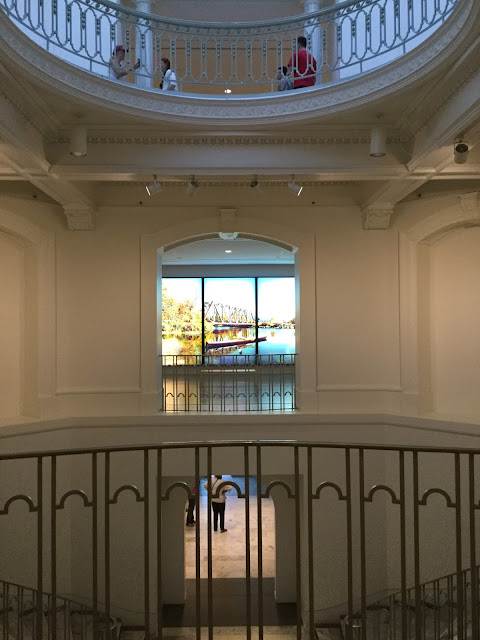 There was a Monet exhibition going on, and the gallery had several floors of paintings, photographs, and mixed-media pieces. My favorite exhibit was called The Last Waves: Laboratory, a series of three-dimensional pieces (or an "installation") by Julia Feyrer and Tamara Henderson.

I stayed until closing and left with mixed feelings. The gallery was much smaller than I'd been expecting, yet even so, I really enjoyed some of the pieces and I wish I could have spent more time there. Between getting there just before 3 and having to stop for a snack, my time there felt very rushed. Totally my fault. But I liked what I saw and I thought the price was fair ($24 Canadian/$19 USD.) If I could do it again, I would.

I decided to walk back to the hotel (it was about a mile from there.) I stopped at a gelato place on the way and got a cone. 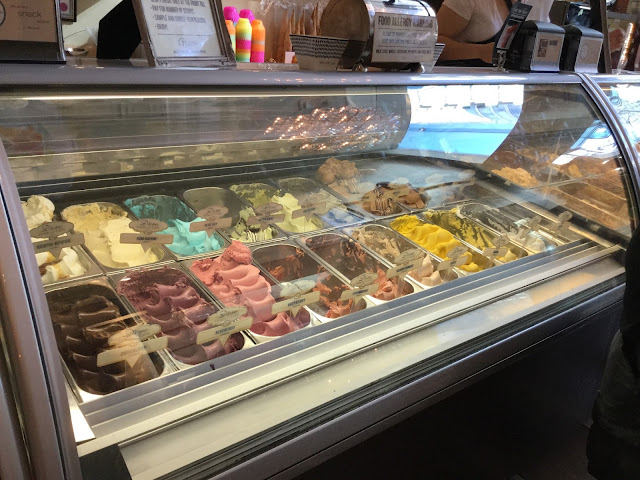 Then I hit up Safeway for a salad and some other snacks. I spent the evening watching TV and relaxing, looking forward to the next day, when Heather would arrive!

What things would we do in Vancouver? Find out in the next post!
Posted by molly at 11:41 PM