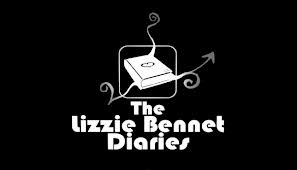 The Lizzie Bennet Diaries is an American drama web series adapted from Jane Austen's Pride and Prejudice where the story is conveyed in the form of vlogs. It was created by Hank Green and Bernie Su and stars Ashley Clements, Mary Kate Wiles, Laura Spencer, Julia Cho, and Daniel Vincent Gordh. It premiered on YouTube on April 9, 2012 and concluded when the 100th episode was posted on March 28, 2013.

Most episodes are two to eight minutes long and the series is presented as a video blog, told by Lizzie and (in the realm of the story) filmed and edited by her best friend Charlotte, although she occasionally takes over the editing when Charlotte is unavailable. All events are recounted and re-enacted by Lizzie, Charlotte, Jane, and Lydia within the confines of Lizzie's bedroom, making for a very different experience than previous full narratives. There are also semi-frequent questions and answers videos (about one in every ten regular episodes) in which Lizzie and other characters answer questions from their audience. Starting with episode 25, the series started moving locations and introducing new characters, such as Mr. Collins, Bing and Caroline.

In addition to the video blogs, all the characters also have various social media accounts through which they interact and reveal portions of the story and perspectives that are not necessarily represented in Lizzie's vlogs.

Fun fact: the first time I encountered this series, I stumbled upon one of the spin-off videos, "Pemberley Digital," and was left feeling so confused. Was this a real company? What was going on? WHAT WAS HAPPENING????

Word of advice: don't start with the spin-offs.

Email ThisBlogThis!Share to TwitterShare to FacebookShare to Pinterest
Labels: all about everything, pride and prejudice