There's A Trope For That - Week Of December 2nd

Annnd it's time for another trope that pops up in every other thing I watch: Disney Death! 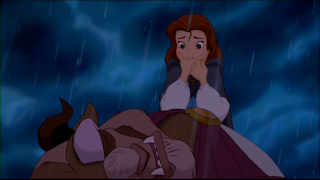 (Not to be confused with Disney Villain Death.)

"Beloved major character is seemingly killed at the climax of the movie/episode, hearts are wrenched, four-year-olds are traumatized, grown men are reduced to tears, and then — oh look, the character is Not Quite Dead after all. "I thought you were dead!"...

Animated films seem destined to have these, considering the target audience is primarily young kids, and nobody wants to give a Downer Ending to them. Writers who are considering implementing it need to be extremely careful, as it can very easily come across as a tacky and cliched way to add some cheap drama to the ending. And probably been done to — um — death, and audiences now expect it. You run the risk of making your viewers remember they're watching television, even if it does shut up the Media Watchdogs.

Named after its frequent use in the Disney Animated Canon, though even Disney likes to kill 'em off for real now and then."

You know what one I love? The one where the hero goes tumbling off a building and everyone in the audience is like AWWW CRAP. HEZ DED!!1, but then the camera pans over the side of the building and it turns out the hero is hanging on, by a single finger, to a gargoyle's incisor. Then the hero suddenly -- somehow -- gets a burst of upper-body strength and wriggles his way back to safety. Yayyy!

That said... just once, I would like to see a movie where the hero falls off a building, we look over the side, the music swells, and -- the hero has made a large mark on the sidewalk below.

And that's it. He's dead. Nope, he didn't bounce off an awning. Nope, his landing wasn't cushioned by a Toyota. He's just dead.

Okay, so that would be a bit sad, but at least it would be surprising.

And I do love surprises.