I'm back with more updates. I am about to go out and work on the project some more, cuz I bought wood and other supplies at Home Depot and am rarin' to go. (Is rarin' really a word? And what exactly does it mean? Nevermind.) SO YEAH, I was at Home Depot and I wasn't sure if I should buy carriage bolts or lag screws because hell if I know the difference, so I pushed one of those "Help" buttons, and a few minutes later this short middle-aged woman with an orange apron showed up. She handed me some lag screws and asked if I knew what a such-and-such tool was, something you need for installing said screws. The tool name sounded familiar. I was like, "well, I have a drill...?" She shook her head. "Do you have a dad or boyfriend helping you on this project?" she asked, loud enough for everyone in the aisle to hear.

On one hand I suppose I should've felt insulted. Or the feminist tiger in me should've come rawwwring (rarin'?) out with some reply, such as: "I don't need no MAN, dawg!" And I guess I did feel insulted, a little. I mean sure, I'm not going to win any carpentry awards, but I'm not a total woodsey newb, either. I just don't know the names of all the tools yet! What of it? But no... mostly I felt sad. Because I WOULD like to have a dad or a boyfriend to help me with the project.* But I do not.

The Home Depot lady made me feel sad!

But I'll get past it. Here are the latest pictures... 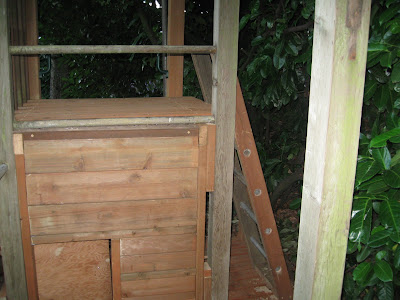 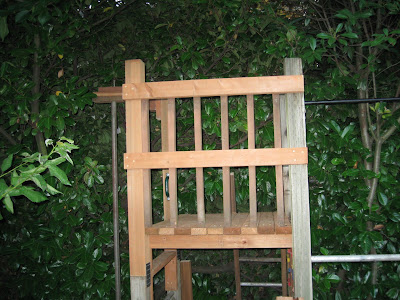 Fireman pole that wobbles a bit (gotta fix that.)

Slat railings on the upper deck.

A ladder with -- as I discovered last night -- slightly crooked rungs.

Hey, like I said, I'm no carpentry expert. DO YOU WANT TO FIGHT?