There's A Trope For That - Week Of November 18th 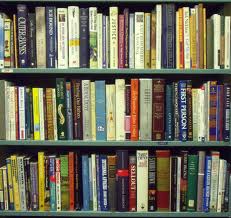 "You've Seen It a Million Times. At least 90% of all Cool Houses have featured one of these. A Bookcase Passage is where a Secret Path is hidden behind a bookcase or triggered by the removal or manipulation of a book in a bookcase.

It doesn't have to involve books; it could be any kind of hidden or secret passage with a disguised door. It just tends to be behind bookcases an awful lot. Another common form is where the passage is hidden behind a fireplace, and activated by a lever of some kind. The switch is often found using a Shaggy Search Technique.


Occasionally, there's a gag where two characters go back and forth through the passage and keep missing each other because they're on opposite sides of the bookcase. This is most likely to happen when the bookcase doubles as a revolving door - a common design decision."

I do love me some hidden passageways -- gotta love movies and books that feature them. As far as bookcase doors go, well, there's one in our basement, but it's not that exciting. For one thing, it's right behind the cats' litter box, so we don't put books on it anymore. And for another, it only leads to the furnace room. Which, unless you like cobwebs, is not a fun place to be. Still....