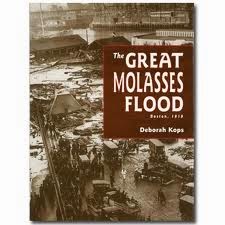 The Boston Molasses Disaster, also known as the Great Molasses Flood and the Great Boston Molasses Tragedy, occurred on January 15, 1919, in the North End neighborhood of Boston, Massachusetts in the United States. A large molasses storage tank burst, and a wave of molasses rushed through the streets at an estimated 35 mph (56 km/h), killing 21 and injuring 150. The event has entered local folklore, and for many decades residents claimed that on hot summer days, the area still smelled of molasses.

The disaster occurred at the Purity Distilling Company facility on January 15, 1919. The temperature had risen above 40 °F (4.4 °C), climbing rapidly from the frigid temperatures of the preceding days. The stored molasses was awaiting transfer to the Purity plant situated between Willow Street and what is now named Evereteze Way, in Cambridge.

The collapse unleashed a wave of molasses 25 feet (7.6 m) high at its peak, moving at 35 miles per hour (56 km/h). The molasses wave was of sufficient force to damage the girders of the adjacent Boston Elevated Railway's Atlantic Avenue structure and tip a railroad car momentarily off the tracks. Author Stephen Puleo describes how nearby buildings were swept off their foundations and crushed. Several blocks were flooded to a depth of 2 to 3 feet (60 to 90 cm). Puleo quotes a Boston Post report:

The Boston Globe reported that people "were picked up by a rush of air and hurled many feet." Others had debris hurled at them from the rush of sweet-smelling air. A truck was picked up and hurled into Boston Harbor. Approximately 150 were injured; 21 people and several horses were killed—some were crushed and drowned by the molasses. The wounded included people, horses, and dogs; coughing fits became one of the most common ailments after the initial blast.
* * *


Local residents brought a class-action lawsuit, one of the first held in Massachusetts, against the United States Industrial Alcohol Company (USIA), which had bought Purity Distilling in 1917. In spite of the company's attempts to claim that the tank had been blown up by anarchists. (because some of the alcohol produced was to be used in making munitions), a court-appointed auditor found USIA responsible after three years of hearings. United States Industrial Alcohol Company ultimately paid out $600,000 in out-of-court settlements (at least $10.7 million in 2012 dollars). Survivors of the fatal victims reportedly received approximately $7,000 per victim (approximately $125,000 in 2012 dollars).

Maybe it's because I live 3,000 miles from Boston, or maybe because I haven't spent nearly enough time on Wikipedia, but I had never heard about this disaster before yesterday, when I ran across a story about it in an old Highlights magazine.

It almost seems like something out of The Onion. I mean... molasses?!

Strangely/sadly, our region is currently dealing with the aftermath of a similar disaster, the Oso Mudslide. (I say similar because of how quickly it happened, with little to no warning, and how it destroyed so many lives.) But then I guess there are hundreds of disasters that have been "similar" -- tornadoes, earthquakes, flash floods, rock slides. It's scary how many deadly disasters just happen without any warning. And on THAT bright note....