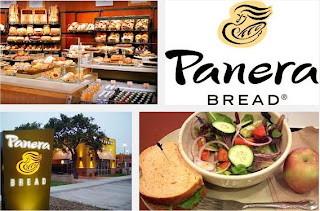 Panera Bread is a chain of bakery–café quick casual restaurants in the United States and Canada. Its headquarters are in Sunset Hills, Missouri, a suburb of St. Louis, and operates as Saint Louis Bread Company in the St. Louis metropolitan area.

In May 1999, to expand Panera Bread into a national restaurant, Au Bon Pain Co. sold its other chains, including Au Bon Pain, which is now owned by Compass Group North America. The company operates or franchises 1,500 Panera Bread bakery-cafés in 40 states and 20 facilities that deliver fresh dough to the bakery-cafés every day. Panera Bread's co-CEOs are William Moreton and Ron Shaich.

In its headquarters city of St. Louis, Panera Bread still operates under the name St. Louis Bread Company. The St. Louis metropolitan area has over 100 locations.

In 2007, Panera Bread purchased a majority stake in Paradise Bakery & Café, a Phoenix-based concept with over 70 locations in 10 states (predominantly in the west and southwest). The Company purchased the balance of Paradise in June 2009.

In 2008, Panera Bread expanded into Canada, beginning with Richmond Hill, Thornhill, Oakville and Mississauga in the Toronto area.

Happiness is: A bread bowl filled to the brim with hot broccoli-cheese soup, alongside an apple or a bag of kettle chips, next to a tall glass of icy soda.

Or a cold smoothie made of a blend of delicious, tangy fruits.

Or a bowl of creamy, hot, cheesy pasta, the same kind you could make from a box thanks to Pastaroni, but HOT... and so good... so, so good...

Panera Bread, you're my hero!

Email ThisBlogThis!Share to TwitterShare to FacebookShare to Pinterest
Labels: all about everything, food