Here are the newest pictures from the Backyard Playground Project, taken yesterday.

First, a shot of the whole thing... as it is right now. It's only about half finished... 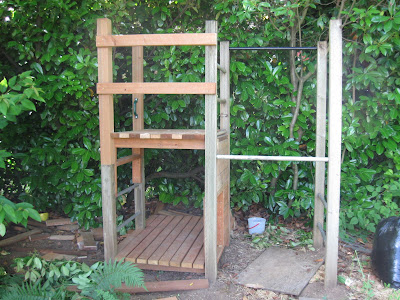 This is the bottom part, which will be a fort-type thing. Only one wall is complete so far. 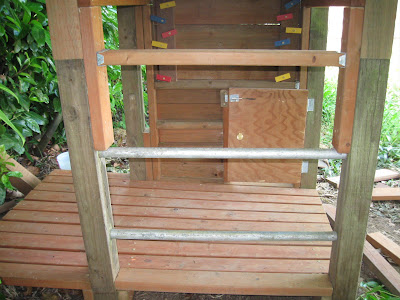 This is the upper part of the structure. Note the green handlebar grips. Thank you, Home Depot playground department! 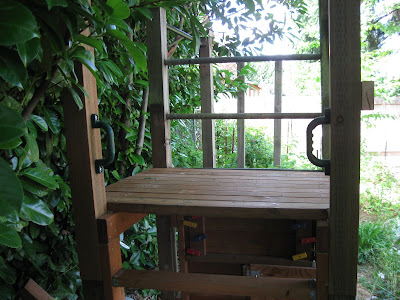 Here is a view of the clubhouse wall from one side. It looks a little boring, but I will do something to spice it up. That square in the bottom left corner is a working door, which opens inward. 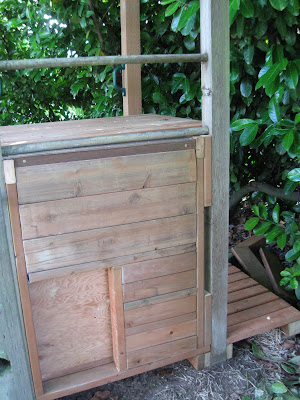 Here's the same wall, as seen from the inside. There are some built-in shelves (for rock collecting or whatever a kid wants to do with them). The Jenga blocks (purchased as a set for a total of 25 cents at a garage sale) are rotatable, and are intended to be part of a large, more elaborate marble run. 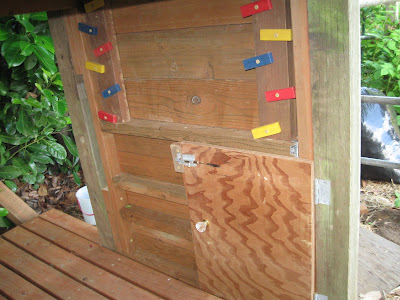 A close-up of the door. It has an acrylic "doorknob" (really a cupboard knob) that looks like one of those glass doorknobs. There's also a sliding lock... and I expect to add more locks to it, locks of different sorts. 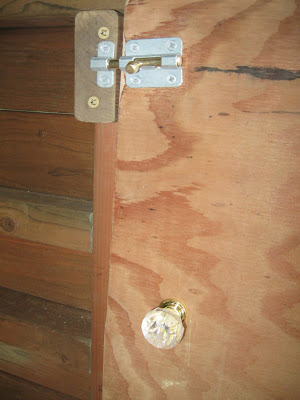 Next up: Vertical posts for the upper deck's railing, another wall for the fort, and...?
Posted by molly at 10:04 PM No comments:

If you build it

When I was in elementary school (1988-ish), my dad (with help from my cousin) built my brother and me a play structure in our backyard. Here are some screencaps of it, taken off some videos circa 1998:

My dad asked us what we wanted, and we got it. I wanted a fireman pole and a horizontal bar; I got em. Stan wanted a trapdoor; he got it. Secret hiding spots, monkey bars, a ladder, and a tire swing... it got a lot of use over the next few years.

As time went on, "the climber thing," as we called it, started to "fall into disrepair," as they say in Disney movies. These photos, taken in 2006, illustrate that: 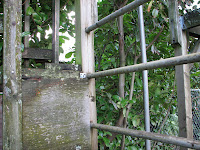 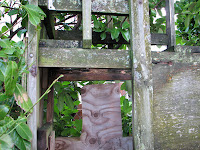 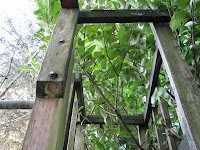 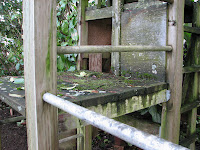 Around that time, I got the notion to fix it up. But, of course, some of it would have to go. Who wants to play on mossy, moldy, rotten wood? Not me! So one day in 2007, my mom had some people from church over to our house, and they helped tear down everything except the main support beams (still in good condition) and some of the metal pipes that ran between them. That was in April, 2007. Since then, it has looked like this: 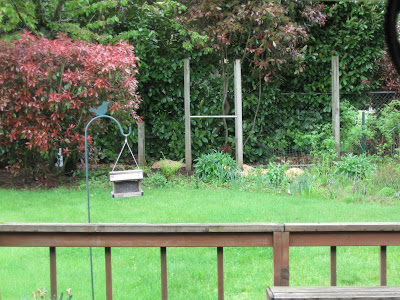 Sure, who WOULDN'T want a giant "Hi" in their backyard? But, really, it left something to be desired. So after two years of procrastinating, this spring I began working on making it into something nice, again. I began by making a wood-planked deck near the ground, between four of the original posts: 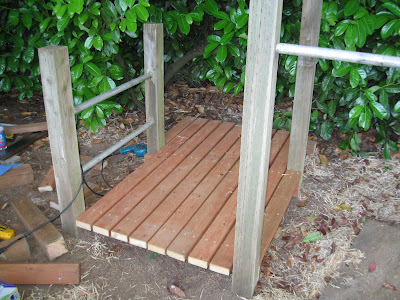 The above photo was taken on June 3rd. I've done quite a bit more since then, but I don't have any pictures to show for it yet.

I've been using a power drill and power screwdriver, but sticking to hand saws for the cutting. Yes, it takes longer, and yes, my arms are sore, but the circular saw is frightening, darnit. Those big teeth -- it looks like the granddaddy Langolier, for heaven's sake. Oh, and I've had the guys at Home Depot do a lot of the cutting, too. Hey, it's free. And they do nice work.

Another update soon, I hope.
Posted by molly at 12:13 AM No comments: