There's A Trope For That - Week of June 3

This week's trope: Every Car Is A Pinto


"Any significant damage to a vehicle, particularly falling off a cliff, is liable to result in a large explosion, even though real cars rarely explode. This is a subset of Stuff Blowing Up. Evidently, TV cars run on nitroglycerine instead of gasoline. This trope comes from the well accepted fact that vehicles are generally full of flammable substances like gasoline. It, of course, ignores that these flammable substances are not explosive unless compressed, and at best your exploding car would actually be a small fire.


While cars are the most common, it seems that any form of transport has a good chance of exploding into a huge ball of flames and debris if it's shot at or wrecked. Aircraft, railroad locomotives, ships, pretty much anything bigger and more mechanically complex than a bread box. Sometimes, this happens to cars that are plunging off cliffs and haven't hit anything yet.

The trope namer is the now infamous Pinto, a low-cost car put out by Ford in the early 70's. The gas tank was easy to damage in a rear-end collision and this often led to the damaged car going up in flames. Ford knew about the lethal flaw but decided that paying out on wrongful-death lawsuits would be cheaper than fixing it. When this was unearthed in one widely publicized case, punitive damages equal to both cost estimates combined were awarded in that one case. They also failed to account for lawsuits by injured victims, having apparently assumed one hundred percent mortality in accidents. Make a "backfiring strategy" joke at your own peril." 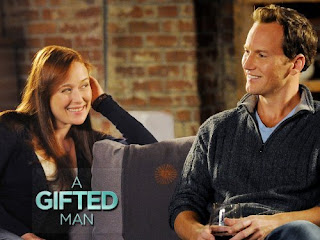 So earlier this season I was watching A Gifted Man on TV, aka The Elizabeth Bennet And Raoul Show, and in the final episode, Michael (the gifted man) was taking this lady, who I'm pretty sure played Judy Garland in that one Judy Garland TV-movie (which, by the way, is really messed up), to the hospital because she was having some sort of medical issue (not unlike Judy Garland! Ooh, see what I did there?) But unlike Judy Garland, this lady -- who I'll call Miranda (because... I can) -- had an organ within her body that used to belong to Michael's deceased ex-wife (Anna?) It should be noted that Anna was now a ghost who liked to hang around Michael (a medical doctor) and make him feel guilty for being a yuppie shmuck. (So not kidding. This was the show's premise. Guy talks to philanthropic ghost, becomes a better person.)  SO ANYWAY, Michael and Miranda would've taken an ambulance to the hospital, but there was some kind of big accident nearby and all the ambulances were unavailable. And they would have taken Michael's car, but it was blocked in. So they decided to take a taxi.

On the way, they chatted about this & that & life.

Suddenly, Miranda cried out. A young child had run out in the street after a toy ball! He had run out in front of the taxi! The cabby slammed on the brakes. The boy was safe.

EVEN MORE SUDDENLY a semi truck plowed into the side of the taxi! It hit the taxi so hard that the doors no longer worked! Michael was able to climb out the back window, but alas, Miranda was injured. (Really, I don't remember what happened to the cabby; maybe he had an eject button.) Badly injured. Michael saw that there was gasoline on the ground. Oh no! thought Michael. He knew the taxi would soon EXPLODE. So even though Miranda's bones were popping out of her, Michael pulled her out the back window of the cab and dragged her to safety.

Then the taxi exploded.

Then Miranda died of her injuries.

Then the series got canceled.

Yeah. So there you have it. A plethora of tragedies, the last one NOT being one of them.

(Oh, okay, I admit I will miss watching those two.... but I can not get behind a medical show that ignores basic scientific principles! Grrr! Argh!)
Posted by molly at 11:12 PM