So the Emmy Awards are tonight.  Every year it's the same with me -- a sense of apathy about the whole thing.  How come?  Well, because the shows I watch are rarely nominated.  Because most of the nominated shows are on channels I don't get.  And other whiny reasons.  Take a look at the shows that are nominated this year, in one category or another...

That's a lot of shows.  What do I watch?  The Amazing Race, Survivor, Antiques Roadshow, and The Office.  Forty-something shows, and I watch a mere four.  Okay, sometimes I watch House with my mom.  So five, I guess.  And I think I've missed episodes of every one of them, so it's not like I'm a die-hard or anything.

Meanwhile, the Emmys are constantly snubbing the shows I enjoy most.  Buffy The Vampire Slayer, one of the cleverest shows ever, never got a main Emmy nod.  The Pretender?  Nope.  Lois & Clark?  Not even.  Wonderfalls?  Completely overlooked.  Since a lot of the shows I enjoy tend to be off the Emmy radar, I often feel like it's pointless to care about the awards.  Obviously, the academy of Emmariffic arts and sciences is comprised of a bunch of dodoheads, so why should I give them my time?

Typically, if I do end up watching the Emmys, I often find myself rooting for specific actors or actresses -- and not because I liked their performance in the show they're nominated for -- but because, eh, I liked them in some movie back in the 80's.  Nostalgia conquers all!

This year, I'll be rooting for Andre Braugher on Men Of A Certain Age, because Scott Bakula is also on that show, and Quantum Leap brings back fond memories.  Aw, Sam and Al and Ziggy... those were the days.

I'll also cheer on Kyle Chandler -- not because I've ever seen Friday Night Lights, but because I used to like his show Early Edition back in the day.

As for the ladies, I think I'll root for January Jones, because I like people who are named after months.  Plus she was in a TV movie I liked once.  If TV movies aren't prime factors in these kinds of situations, I don't know what are!

And you know... sometimes the Emmy telecast does turn out to be worth it.  Like when Kristin Chenoweth won for Pushing Daisies?  Totally awesome.  I was glad to be watching it that time.

Besides, Ricky Gervais has been known to show up at the Emmys and sometimes even present awards.  Ricky is totally worth tuning in for.

Oh, I've also seen one of the two nominees for outstanding TV miniseries... Return to Cranford.  It's up against The Pacific, which is getting all the good buzz.  Cranford, in case you were wondering, was one of those Masterpiece-Theatre-Judi-Dench exhibitions.  I seem to remember either someone getting hit by train or being trampled by a cow.   Or maybe it was both.*

In the end, I don't really care who wins anything, except in the Reality Show Host competition.  I swear on a stack of Little Golden Books, if Tom Bergeron wins  that one, I'm boycotting the Emmys next year.

And by next year, I mean FOR-EV-ERRR.

*Edit: Oh hey, I just remembered.  The cow got hit BY the train.  Wow, how did I forget a thing like that?
Posted by molly at 1:39 AM No comments:

Do you want to see something gross?

In case you don't particularly, I'll make the picture small.  But you can click on it to see it in its finest state... 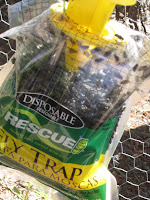 I bought this fly trap about a week ago, to take care of the pest problem around our chicken coop. $4.99. Previously I had been spending 45 minutes outside daily, bludgeoning flies with a swatter, in what amounted to a modified game of Whack-a-Mole.  And while that was fun for a while, I realized I wasn't making much of a dent in the fly population.  Besides, my shoulders were starting to hurt.  I needed something else.  So off to the store I went, intent on buying an electric-shocking flyswatter or some other novelty.  That's when I saw this.  All I'd have to do was set it up, hang it up, and wait.

Today, a week later, the trap is half full of insect carcasses.  See that green stripe with the word "Rescue" on it?  The bodies go all the way to the bottom of that green part.  They just keep adding up, stacking on top of the previously deceased.  Isn't that revolting?  I love it!  The fine print on the packaging says the trap can hold 2,000 flies.  TWO THOUSAND.  So that means there are about 1,000 in there right now.  Incredible!  Wait, I shouldn't have told you that... we could've had a contest, like those jelly beans in a jar contests.  The one where you win the jelly beans.  Only this time, it could be loads better.  Whoever guessed the closest could win the bag of flies! Think of how happy that could make your pet frogs, if you had any.  Just THINK!

Email ThisBlogThis!Share to TwitterShare to FacebookShare to Pinterest
Labels: life

I have an addendum to make to my movie character crushes list.


I present: Prince Albert from The Young Victoria... 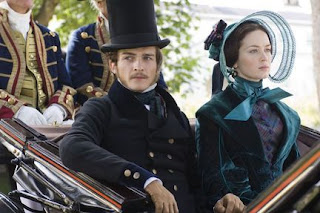 Or, as I have affectionately dubbed him, Hottie McHotalot.

At first I wasn't sure if I should include him, since Albert was a real person, not simply a movie character.  But then I remembered that it's my list and I get to make the rules.  Prince Albert makes the list because he is kind and helpful and head-over-heels in love with Victoria.  Like, at first his relatives/advisors try to set up the marriage for strategic reasons.  But when Albert falls in love with Victoria, he turns his back on all the scheming.  His heart is pure.  I love it when hearts are that.  It just makes me all googly inside.