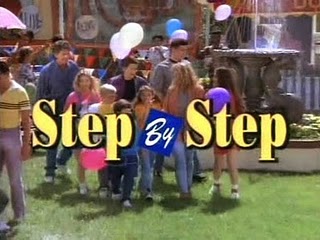 When I was a kid, there were three ways I might be introduced to a TV show:

3) Friends telling me about the show's very existence in the first place.

Number three is what happened with Step By Step. I remember (and please don't ask how my brain can remember THIS, and not where I left my keys) that my friend was spending the night at my house one Friday, and she asked if I watched TGIF.  I, being a failure of an 80's baby oblivious, said no, I had no idea what that was.  And so she explained the acronym and introduced me to the world of Family Matters, Dinosaurs, whatever else used to air back in 1992 (Perfect Strangers?), and, what soon became my new favorite Friday-night show, Step By Step.

Already a fan of The Brady Bunch, I'm sure the shows' similarities is what initially drew me to SBS. There were lots of kids on SBS, and that made it fun. 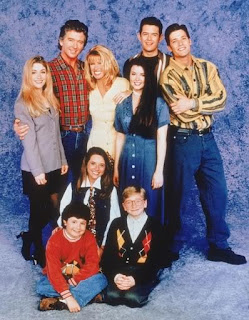 For the uninitiated, here's how the plot went down: Widow(er)s Mike and Carol... wait, hold on, I'm mixing medias again... DIVORCEES FRANK AND CAROL... met up while on vacation and eloped.  When they returned home, they had to explain everything to their kids.  Frank Lambert had three: teenager J.T., pre-teen Alicia (Al), and tyke Brendan.  Carol Foster also had three of her own -- teenage braniac Dana, teenage ditz princess Karen, and little geeky Mark.  The kids did not get along at first; in fact, Dana and J.T. had a rivalry that lasted several years.

Various supporting characters came & went during the show's run.  In the beginning, Carol ran a beauty parlor in the garage, and her mother and sister were her partners in that venture, but that didn't last.  Frank's nephew Cody was added to the pack early on; he was a popular character who had a crush on Dana.  In the fourth season, Frank and Carol got pregnant, and Lily Foster-Lambert was born in 1995.

That's about when things started to get crazy.  Lily morphed into a kindergartener in 1997 (no doubt emulating the Keatons and Seavers of Television Past), and she was such an annoying brat, it made you wish Carol and Frank had never touched.  Cody disappeared, and in his stead, we got Rich, "Flash" Gordon, and Jean-Luc Rieupeyroux (played by Bronson Pinchot, of all people).  They also lost Brendan to the Judy Winslow curse (aka Gone But Never Explained Away, Hoping You Won't Notice Since There's So Many People On The Show As It Is.)  And sometime post-Cody, but pre-BigLily, they all went to Disney World!  Because WHY NOT?? 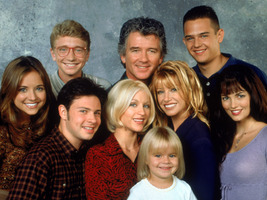 My favorite season was the 1994-95 one, where Carol was pregnant.  As someone who wanted a baby sister myself, I found myself living vicariously through the Fosters and Lamberts that year.  My least favorite season was the second-to-last one, when Child Lily showed up.  I can't judge the final season because I didn't watch it... that's when the poor show was transferred to CBS (along with Family Matters) in order to (I kid you not) liven up the so-called Old-Folks network that was CBS. (In case you're wondering what happened to TGIF, don't worry.  It still had Boy Meets World and Sabrina The Teenage Witch.  Only now it also had Teen Angel.  And it wasn't about a young David Boreanaz, I am so, SO sorry to say.)

And so, my friends, ends this sad tale.  A tale of broken dreams and... oh, what am I saying?  Who cares?  It was good while it lasted.  Nuff said.