Somewhere along the line, the Baby-Sitters Club Super Specials got weird.

In the beginning, the Super Specials were all about these fun, but pretty believable, vacations or school trips the baby-sitters took. They went to the Bahamas (sure, fine, two of them went as paid mother's helpers and zillionaire Watson Brewer paid for the others to go). Then they went to summer camp. Then a school trip to a winter's lodge (slightly less believable, but I guess it could happen that an entire school gets invited to another state to spend the week skiing and throwing snowballs.) In later books, they went to places like New York (but hey, Stacey's dad did live there) and California (Dawn's dad lived there), Sea City and Shadow Lake. As the series began winding down, they went to Hawaii, on a cross-country road trip, and even to Europe.

Keep in mind that during every one of these excursions, except perhaps for the first one, the girls were in the eighth grade.

When I was in eighth grade, I think my family maybe went camping. Once.

Because when I was nine years old, Super Special #4, Baby-Sitters' Island Adventure, was the most amazing, incredible, fantastic novel of our modern era.

Okay, I do have to give this book credit. It is fairly well-written, which is more than I can say for New York, New York!, Super Special #6. But it's still pretty goofy. It was as if the author really wanted to write a survival/Gilligan's Island-type book, but instead of putting original characters in it, she selected two familiar, but still innocent, thirteen-year-old baby-sitters and four of their little friends and marooned them. And while the island/survival story is as dramatic as it can be (for being a G-rated book), the other characters' stories are a bit... well....

In fact, I'd like to talk about the side stories first and get them out of the way, but they don't make a lot of sense without having some context about the A Plot, so we'll start with that: 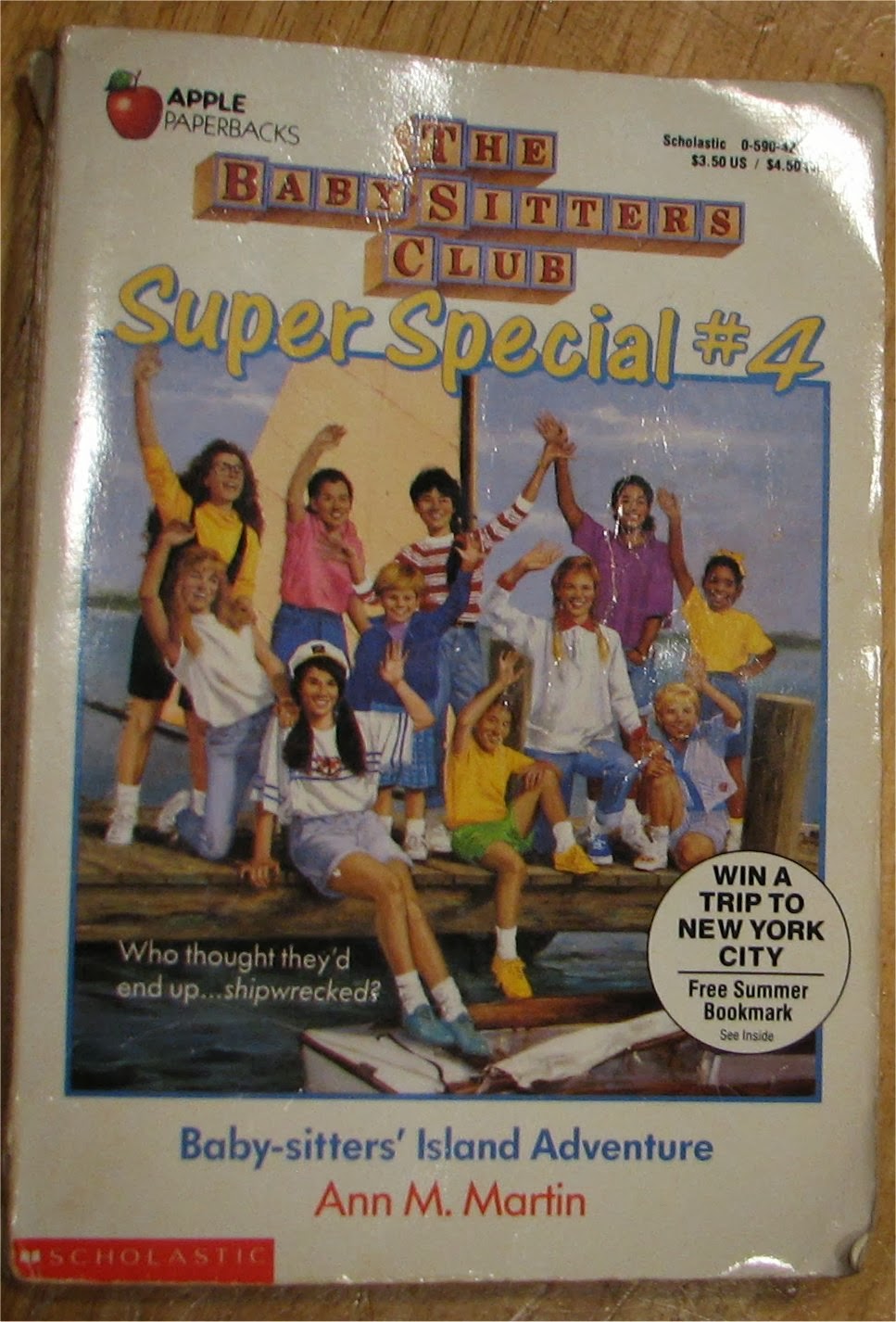 Claudia Kishi and Dawn Schafer are suddenly all about taking sailing lessons. They get really good at sailing and decide to have a race. The race ends up being a tie, so they agree to have a rematch. They are so good at sailing that their instructors tell them they can now sail without any adult accompaniment (RED FLAG) just as long as they're not sailing alone. The girls think it would be fun to race to Greenpoint Island, off the Long Island sound, and have a picnic lunch there. Since Dawn's brother Jeff will be visiting soon, Dawn wants to include him. To keep things fair, Claudia endeavors to choose a companion of her own, and is encouraged by Jessi to take along eight-year-old Becca (Jessi's sister). Then Becca tells her friend Haley Braddock about the race, and she wants to go, too. Once again, the "teams" are uneven, so for the fourth person they decided to drag along a preschooler, Jamie Newton.

And somehow, every single parent of every child involved is on board with this plan. Jessi & Becca's parents are even leaving town for the weekend, leaving Becca and the girls' baby brother in Jessi's competent overnight care. (Jessi is 11 years old. When I first read this book I just thought, Wow, Jessi is so cool. Now I think, Wow, her parents need to be reported.) Simpler times, friends... simpler times.

So the big boat race begins mid-day Saturday, but halfway to Greenpoint Island, a storm comes up, and one of the boats starts filling with water. Claudia, Dawn and the 4 kids (Jeff, Haley, Becca, and Jamie) wind up on the wrong island and have no idea where they are. They find shelter, begin rationing their food, and make a camp fire.

Meanwhile, back in Stoneybrook, their friends and family members begin to worry. Claudia & Dawn & the kids should've been back by now! A massive search effort begins. The boat that filled with water and got wrecked is found drifting. The other boat, which the girls neglected to pull far enough inland, has floated away and returned to Stoneybrook completely empty. Reporters are everywhere. Searchers are hopeful. Friends of the "disaster victims" are in tears.

When she realizes her sister has not returned in a timely manner, Jessi decides to start calling people on her list of emergency numbers. I don't know why she doesn't just call her parents, who have left town. I mean, even without cell phones, wouldn't they have left another num-- OH WELL -- Jessi phones her Aunt Cecelia, who comes running. Cecelia is described as being a total meanie, but as far as I can see, she doesn't do anything worse than chastise Jessi and her parents for being irresponsible, which, considering the circumstances (11-year-old left at home for 2 days with younger siblings) actually kinda makes sense. You tell em, lady!

Mary Anne is a basketcase, because right before the sailing race, she told Dawn she never wanted to see her again, all because Dawn neglected to give her a phone message from Boyfriend Logan, which resulted in Mary Anne and Logan having a petty fight. Says Mary Anne:

"You know what? I wish I never had to see you again. I wish you would get out of my life -- forever."

Now that Dawn is missing, Mary Anne is convinced that her cutting words caused the accident/island adventure/storm/whatever, and she's so upset, she can't even bring herself to help search. I really don't like Mary Anne in this book.

Kristy and her softball-playing Krushers are gearing up for a big game against Bart's Bashers. Kristy liiiikes Bart. But after Dawn and Claudia disappear, Kristy wants to cancel the game to help search for them, and Bart thinks Kristy is being a chicken about the big game. Later, Bart apologizes, but tells Kristy that sometimes she exaggerates and that he doesn't always known when she's telling the truth. So Kristy agrees with him and vows to be better in the future.

Stacey is in New York visiting her dad when she learns that her best friend Claudia has gone missing. She begs her dad to let her return to Stoneybrook to help search, but her dad says pish posh, I'm sure Claudia's fine, and he doesn't get to see Stacey that often, oh and also he has tickets to an expensive play that evening, so dammit, young lady, you are staying here. Stacey is pissed.

"I'll get dressed," I said. I bet my lips were white. That's how mad I was. As soon as Dad left my room, I closed the door. I'm sure my father thought I just wanted the privacy, but I was closing him out.

On Monday, when she finally escapes New York, Stacey writes her father an I'm-upset-with-you letter, which she sends to him to tell him what's what. They work things out. It's all good.

Mallory... doesn't do much. She hosts an Emergency BSC meeting in her bedroom, where there are only four members present (two are lost, and Stacey is in New York) and they all sit around crying. Thank you for your help, Mallory. We all value you! Just kidding. Her family, who I guess is also into boating all of a sudden, take out some kind of schooner to help search for the missing kids.

On the island, the kids worry and fret and hope to be rescued. The younger ones decide to build a little fort. Dawn and Claudia watch.

"[Jeff's] really good with kids," remarked Claud after a while.

"I know," I said. "I discovered that the last time I was visiting in California. Jeff and I got stuck sitting for two kids one night, and the baby wouldn't stop crying. So I took care of the baby and Jeff entertained the older kid. He was great."

"It's good to know," said Claud slowly. "I mean, if anything happens to you or me, I think Jeff could kind of take over."

Wow, Claudia... that just got dark.

Look... Jeff is a mere one year younger than Jessi, she of the overnight-sitting privileges back in Stoneybrook. Why do you guys sound so in awe of Jeff's childcaring competence?

Later that afternoon, Jamie gets sick with a high fever, and the baby-sitters have to take care of him. To prevent everybody from starving, Jeff has figured out a way to catch fish. Claudia invents a way to collect rainwater. On Monday, she finds a piece of a mirror, which the kids use to signal a search plane. And it works! Rescuement!

So after two days on the island, the kids are found and are returned home. Jamie Newton is pretty sick and has to go to the hospital, but he's sprung after a day. Everyone is super happy to see everybody else. Mary Anne cries like a faucet because she is Mary Anne. Logan and Mary Anne make up. Kristy and Bart make up.

Later in the week, a big newspaper article all about the ordeal is published. Says Dawn: The article was pretty impressive. It took up most of what was left of the front page below the enormous headline. Then it was continued inside. That was where the photos were -- a whole page of them. There was a picture of the disaster victims, a picture of Mary Anne and me hugging, and, lo and behold, a picture of the BSC members.

"Ooh," said Stacey. "I know. Let's each cut out this picture from our own copies of the paper, frame the pictures, and hang them in our bedrooms."

"Great idea," said Kristy. "Hey! This article is good advertising for the club!"

I'm not sure which person I want to smack more -- Stacey or Kristy. Could they think of anything dumber to say? Can anyone think of something worse?

Oh hey. Claudia FTW: "Hey!" exclaimed Claudia. "I just thought of something.... We never finished our sailing race. We're still tied, Schafer. We still need a rematch. How about it?"

Isn't that like asking someone who just survived a plane crash if they want to go for a super fun plane ride?

Well, that's it for the plot. Now, how does it stack up to other BSC Super Specials? It's much better than some, but not as good as others. The parts of the book that take place on the open water and on the island are actually really good. The survival stuff is cool. The scenes that take place back in Stoneybrook are pretty blah. 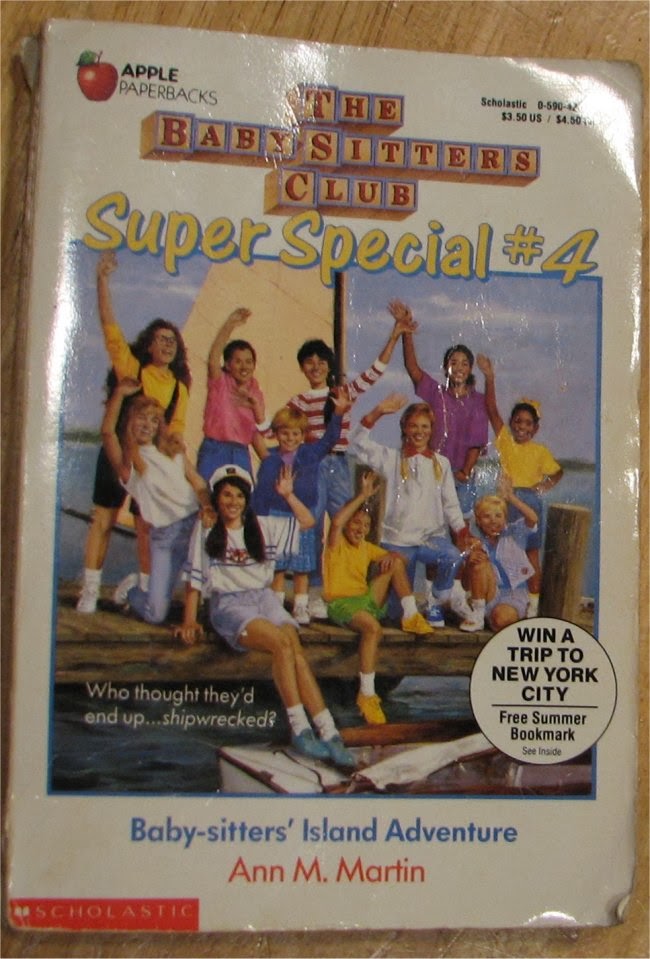 Oh, where do I start?

Mary Anne, who didn't even help search for the missing kids, is apparently enough of a fan of sailing that she has to dress thematically.

Jeff (front center) has brown hair for some reason and kind of looks like a girl. However, I have to give him props for his outfit. Yellow shirt, green shorts, and yellow shoes. That takes courage.

Mallory looks like she's marooned on an island and is trying to flag down a passing ship. I'd say something about her outfit, but she's not the only one who was wearing that kind of getup in 1989. *whistles*

Claudia, Jessi, Becca, and Dawn actually look quite nice. Wonder how they got off so easy.