Eye(s) of the Tiger 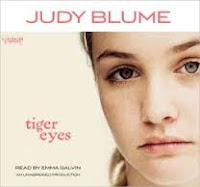 Judy Blume's Tiger Eyes was published when I was a baby. And when I picked up my first -- and then second, and then 11th -- Judy Blume book, Tiger Eyes was not among them. First I read the Fudge books (Tales Of A Fourth Grade Nothing, Otherwise Known A Sheila The Great, Superfudge, and Fudge-a-Mania). Then I read Are You there God? It's Me Margaret and Blubber. In middle school I was all over Just As Long As We're Together. In my late teens I got hold of Iggie's House, Starring Sally J. Freedman As Herself, Deenie, It's Not The End Of The World, Then Again Maybe I Won't, and Summer Sisters. And then, when all those were taken care of, I was left with just a few not-reads, and one of those was Tiger Eyes.

The summer I first read Tiger Eyes wasn't a great summer. A friend had unexpectedly died a few months before. Nothing really made sense to me anymore. Then, suddenly, I was immersed in this book about a girl whose father has unexpectedly died. A girl who becomes a mess of grief, fear, and confusion. And then a girl who begins to heal, slowly, and find happiness again. It was deep, it was powerful, and it was exactly what I needed.

Tiger Eyes begins as Davey Wexler's father has just been murdered, leaving her in a state of shock and emotional despair. Davey's mother decides to relocate the family (which includes Davey's younger brother, Jason) to New Mexico, to live with Davey's aunt and uncle. The relatives are well-meaning, perhaps, but Davey clashes with their strict rules and bizarre beliefs. Meanwhile, Davey's mother breaks down, and she isn't there for either of her children for quite a while. As the mother slowly starts to come back, she begins seeing -- and considering marrying -- a guy the aunt and uncle know. Davey is, of course, horrified. Not only has she lost her father, but she's lost her home, her way of life, and even the mother she knew.

But then there is Wolf. Davey has biked out to the canyon and there she meets this mysterious, cute guy, who, over multiple encounters, helps her begin to see beauty in life again. Through Wolf -- and the healing power of Time -- Davey starts to peel away all the layers of regret, hurt, and guilt that are keeping her trapped. Her heart begins to heal. She remembers how much she loves to sing.

Tiger Eyes is a hauntingly realistic book about surviving a horrendous loss, repairing your soul, and moving forward with your life. It's about reaching that point where you realize it's okay to feel happy again.

And, for the love of all good things, it has now been made into a feature film. It was actually shot a few years ago, but it's taken a while for it to find a distributor, I believe. Tiger Eyes, the film, is currently playing in select theaters around the United States. On June 7th, it will become available on iTunes, Comcast's On Demand, and even more theaters (including one here in Oregon! Hurray!) 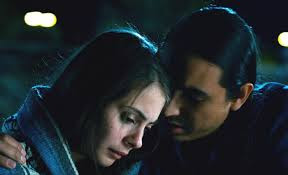 I have been waiting so long for this that I'm pretty excited about it.

Now, I know sometimes books don't translate into movies so well. But I'm not especially worried about this one, because it was made with Judy Blume overseeing things. Her son (who previously directed the TV-movie/special Otherwise Known As Sheila The Great) directed this film. And Willa Holland, who playes Davey, is -- from what I've seen -- pretty incredible.

So yays all around. I'm going to go see it. Will you?

Well, I saw it, and I liked it. Several parts made me cry. There are quite a few differences from the book, but... still, it's a worthy film and I'm so happy to have finally seen it. :) I hope there will be many more Judy Blume movies to come.
Posted by molly at 7:12 PM