This Week's Topic: A Sunday Afternoon On The Island Of La Grande Jatte 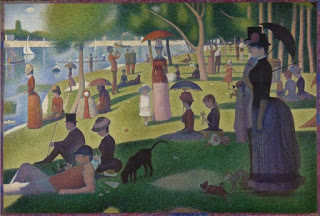 A Sunday Afternoon on the Island of La Grande Jatte – 1884 (French: Un dimanche après-midi à l'Île de la Grande Jatte - 1884) is one of Georges Seurat's most famous works, and is an example of pointillism.

Georges Seurat spent over two years painting A Sunday Afternoon, focusing meticulously on the landscape of the park. He reworked the original as well as completed numerous preliminary drawings and oil sketches. He sat in the park, creating numerous sketches of the various figures in order to perfect their form. He concentrated on the issues of colour, light, and form. The painting is approximately 2 by 3 meters (7 by 10 feet) in size.

Motivated by study in optical and colour theory, Seurat contrasted miniature dots of colors that, through optical unification, form a single hue in the viewer's eye. He believed that this form of painting, called divisionism at the time but now known as pointillism, would make the colors more brilliant and powerful than standard brush strokes. The use of dots of almost uniform size came in the second year of his work on the painting, 1885-86. To make the experience of the painting even more vivid, he surrounded it with a frame of painted dots, which in turn he enclosed with a pure white, wooden frame, which is how the painting is exhibited today at the Art Institute of Chicago.

I like this painting because it makes me feel calm.

Although, without the accompanying soundtrack, something is lacking.

Also, I can't believe women actually used to wear those bustles. Look at that lady on the right. She could be hiding another human being back there and nobody would know.
Posted by molly at 4:56 PM

Email ThisBlogThis!Share to TwitterShare to FacebookShare to Pinterest
Labels: all about everything, art