Recently I decided that I wanted to, and should, and by gum would read Little Women. 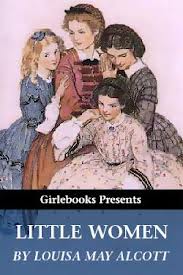 I had read Little Women -- or thought I had -- back in elementary school. I remember someone in my class trying to spoil it for me partway in by telling me that Beth dies. Prepared for the worst, I read on -- but, lo, Beth didn't die! She got ill, but she lived. My classmate was clearly a liar.

Then I saw the 1994 Winona Ryder movie, and... oh... yeah... Beth dies. Plus there's all this other unfamiliar stuff going on. Jo gets married? Meg has kids? Amy and Laurie... OH NO THEY DIDN'T.

Somewhere along the way, I realized that "Little Women" is actually two books, the original and its companion, or sequel, Good Wives. The latter is the one where Beth dies. And the two have been regularly paired, as one book, for over a century. However, when re-printing Little Women for young readers, often just the first volume is included.

In conclusion, I had not read BOTH volumes until recently.

Louisa May should've stopped at one.

Okay, okay, the second volume is interesting as a sequel; I mean, it's sort of... nice... to see what happens to the March sisters as they become, ugh, good wives. It's actually pretty depressing from a 21st-century standpoint to see what these ladies do with themselves in Volume 2. Except for Jo, of course, who's awesome. Unfortunately, the second volume gives us very few chapters about Jo. Instead we get a bunch of mush about Amy and Laurie, and how Amy wants to be wealthy and marry rich, but she loves Laurie despite his richness; and all this other jazz about how Laurie transfers his romantic affections from one sister to the other. Ew. We're also treated to The Life & Times of Meg And Her Husband, John Brooke, getting a look at their domestic trials, and being subjected to chapters about the misadventures of their precious, brilliant toddlers.

Which is why... I think... this is one instance in which the movie adaptations kind of improve on the novel.

Let's talk about the movies. Actually, there have been many. But there are four that are widely available: 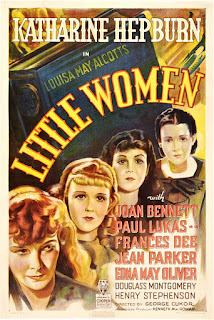 Katharine is great in the role of Jo, but the other sisters look like painted dolls. Overall I liked it, though.

Speaking of that version, a few years ago I ran across this printing of the novel: 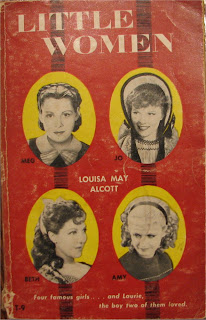 I don't know what's up with that tagline. It could be argued that ALL the March girls "loved" Laurie, as a brother and a friend. Only one of them ever did romantically, and that was Amy. And the girls certainly aren't "famous" in the novel.  They're famous to readers, yes... but otherwise.... Anyway, it made me laugh because it's just so weird.

(which is very similar in to the previous film, as if they were working off the same script)
Starring: June Allyson, Margaret O'Brien, Janet Leigh, and Elizabeth Taylor 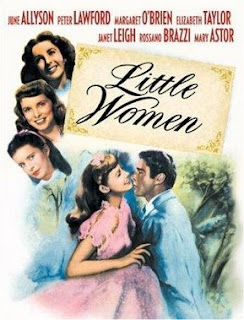 I liked this one slightly more than the 1933 version, even though they were so similar. This one sort of improved on its predecessor. It's interesting to see how far the film industry had come in just 16 years as far as technological improvements were concerned. The 1949 version LOOKS better than the 1933 one, and the actresses don't look as creepy. 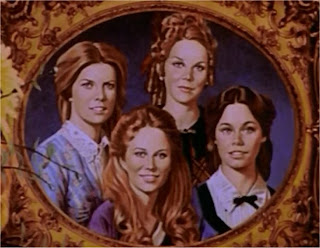 I didn't expect this version to be that good, considering the era -- other 1970's TV adaptations of classic books, such as BBC's Anne Of Avonlea and The Secret Garden, seem low-budget and look pretty mediocre today. But I actually enjoyed this one. Sure, there are some cheesy moments, and the movie, strangely, twists Laurie and his Grandfather's relationship into a rather dysfunctional one. But Susan Dey is great as Jo, and I have to give props to Eve Plumb for doing such a good job as Beth that I momentarily forgot she used to be Jan Brady.

However... all three of these versions suffered from one awkward problem: They employed only one actress to play Amy. Amy's supposed to be 12 when the whole thing starts, and by the time things begin to wind down -- pretty much when Jo and Friederich get together -- about ten years have passed. While some actresses could, perhaps, play 12 to 22 convincingly, Amy is an odd character who starts out whiny and bratty and horrid, and then evolves into an elegant, stylish lady. And anytime you get an actress who's outgrown her teens (in the case of the Amy-actresses of 1933 and 1978, who were in their 20's) playing a bratty pre-teen, it starts to feel like you're watching one of those Freaky Friday-type movies where the daughter is now in the mother's body. It's just hard to buy.

SO. When 1994's version of Little Women rolled around, they decided to hire TWO actresses to play Amy.

Who, I always thought, looked nothing alike. 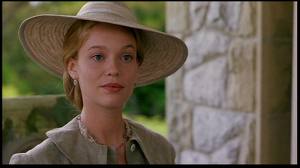 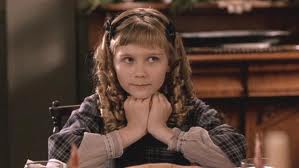 But in these pictures they kind of do. Except for the eyes, the lips, and the facial shape.

And Susan Sarandon as Marmee. 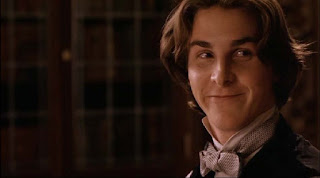 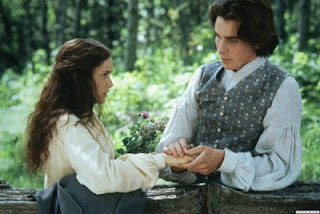 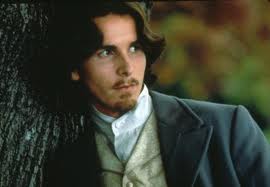 Laurie, you may be kind of obnoxious in the book(s), but on-screen, you're smokin' adorable.

Although let's get one thing straight: facial hair? BAD.

Sad fact: when I first saw 1994's Little Women, in the theater, I was not impressed. A few years later, I ended up renting the movie from Blockbuster. Then again. And again. And many more times until I finally just bought it. And now it's actually one of my favorite films.

And I will probably continue to watch it as often as I ever did.

The book, on the other hand...

Okay, so reasons why the book may be superior to any of the films:

*It's long. Lots of little vignettes and subplots going on. If you tried to make a faithful film adaption, we'd be talking about a 10-hour movie. If you're one of those people that likes to spend as much time as possible with a group of characters, the book should meet your needs.

*There's a lot of morality stuff which would probably bore modern moviegoers, but, when given out in small doses in the novel, are actually kind of inspiring. Until things start to get preachy. Then not so much.

*The language, especially in the first volume of the novel, is lively and often funny. While any of the films could replicate the words or dialogue, a film would be hard-pressed to capture most of it, and definitely couldn't get all of it (unless the film was 10 hours long; see above.)

*Every actress I've seen playing Jo has portrayed her in a slightly different way. I've seen tomboyish and hot-tempered, decorum-less and goofy, and loud, awkward and wild, and yet none of them quite capture ALL of who Jo is in the novel, though they certainly try.

*The dad, Mr. March, gets seen and mentioned a lot more in the book than in any of the films. In fact, in the 1994 version, after he returns from the battlefield you barely see or hear from him again. You almost forget he even exists, unless you're paying close attention and see that, oh yeah, he IS there in the background occasionally.

*If you're a huge fan of Amy or Meg, the book should be right up your alley. In the films, the focus sometimes swings toward Jo and she becomes the central character -- it certainly does in the 1994 version -- and the others' plots don't get as much attention. On the other hand, if you ARE, in fact, a huge fan of Amy or Meg... Seriously? SERIOUSLY? We need to talk.

So those are some of the things the book has going for it.

Would I read it again? Sure. But I may only re-read the first volume, if I do.

And I'll continue to love the films, of course. 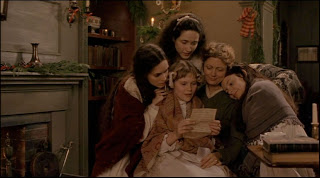 Volume 2 uses the word "feminine" eight times. We have:

That's a lot of femininity.