At the beginning of April, I got a call to work on the second-to-last episode of the fourth season of Grimm. I had already worked on one of the earlier episodes this season (well, "worked" is an overstatement; mostly I sat), and I did an episode back in season two where I got to drive a bit.

This was going to be a night shoot, on a Thursday night, but as luck would have it, Friday was a non-school day, so I didn't have to worry about zombieing through the next day, or worse, having to call in "sick" (read: tired.)

I showed up on set around 6:00pm. Just like last time, we sat around, got our hair done, then had a delicious dinner. After about two hours, they handed us maps to drive to a downtown filming location, and we all departed.

Annnnd then I got lost.

I was supposed to turn onto Front Ave./Naito Parkway, but I got on the 405 instead, which put me about 12 blocks from my goal destination. Ugh! Downtown Portland is an absolute maze. A bunch of streets are one-way. Other streets have "no turns" signs. Even more are blocked by construction or Max (train) tracks. It's bad enough during the daytime. In the dark? Time to panic!

Luckily, I knew where I was going, it was just a matter of navigating the labyrinth and getting there. Finally, after some fervent prayers, I made it. As it happened, out of the seven or so drivers, I was the last to arrive. They told me where to park. Then I went to Extras Holding, which was a coffee shop. I settled at a table, took a few deep breaths, and proceeded to try to relax while I awaited further instructions.

My first instruction was to move my car forward about thirty feet. So I did. I was now parked just outside the coffee shop. Several times, a big truck came by and sprayed down the street (and my car!) to make it look like it had recently rained (how Portlandesque!)

Back inside, I sat, read Harry Potter, and sipped chai and drank coffee for the next eight hours. I was never asked to be on camera. All they ever wanted was my car.

Hey, I'm not complaining. It's fun to get paid to sit around and veg, even if it is the middle of the night and you're already exhausted from working a regular 8-hour day. Especially fun (well, interesting!) when you get to share a coffee shop with a half a dozen other extras, three ladies dressed like Pretty Woman, and actors David Giuntoli, Reggie Lee, Russell Hornsby, and Sasha Roiz.

Yes, those four handsome gentlemen were all there, coming in and out of the coffee shop throughout the night. Not knocking the others, but David G. is especially attractive, and this is the first time I've gotten to see his face IRL (as opposed to the back of his head, which isn't half bad either.)

Towards the end of the shoot, I asked a PA if I could go out and watch some of the filming, and was given the OK. It was freezing outside, but I did watch part of the scene where Nick & the others stop Captain Renard from doing a very bad deed. (I guess should be all "spoiler alert," but the episode ("Headache") aired this past Friday, so whatever.)

OMG this episode. Wow. The other episodes I participated in ("Nameless" and "Dyin' On A Prayer") were pretty benign compared to this one. "Headache" was totally gruesome! PG-14V indeed!) 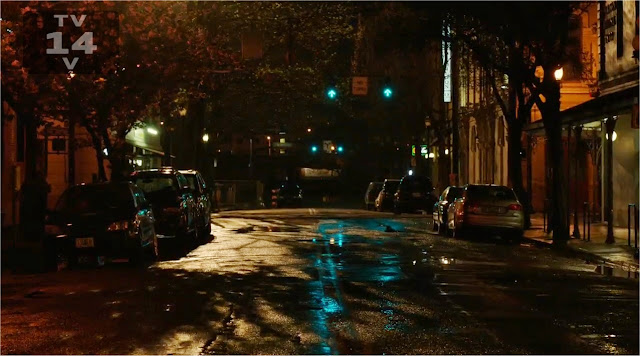 That's my car on the right... just in front of the silver car. You can see it better in this next pic, there on the left... 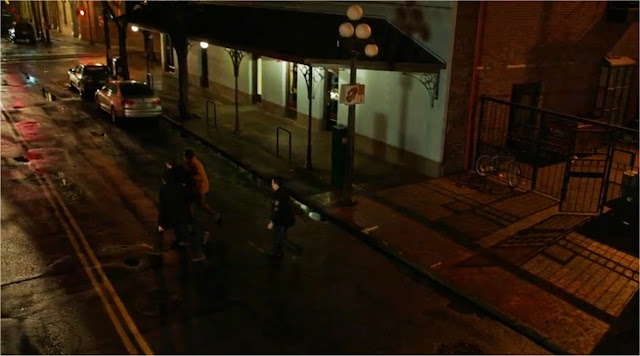 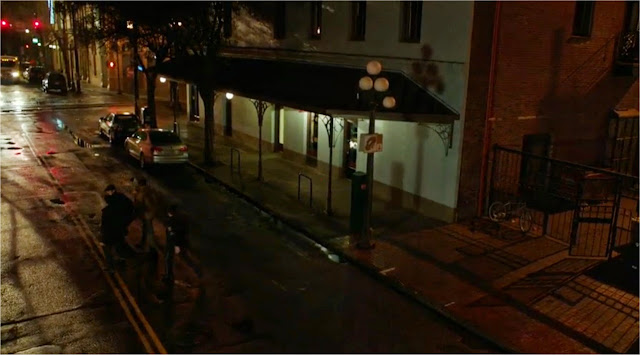 That gray building is the coffee shop we were all in. Floyd's Coffee Shop in Old Town! Go visit and buy some chai!

My last instruction of the night? "Leave." At 4am, the episode wrapped, and we all go to go home and sleep for a very long time.