The Up Series is a series of documentary films produced by Granada Television that have followed the lives of fourteen British children since 1964, when they were seven years old. The documentary has had eight episodes spanning 49 years (one episode every seven years) and the documentary has been broadcast on both ITV and BBC. In a 2005 Channel 4 programme, the series topped the list of The 50 Greatest Documentaries.

The children were selected to represent the range of socio-economic backgrounds in Britain at that time, with the explicit assumption that each child's social class predetermines their future. Every seven years, the director, Michael Apted, films material from those of the fourteen who choose to participate. The aim of the series is stated at the beginning of 7 Up as: "Why do we bring these children together? Because we want to get a glimpse of England in the year 2000. The shop steward and the executive of the year 2000 are now seven years old."

If you've never seen this series, get it from Netflix, Amazon, wherever. Start with "7 Up" and go from there.

Each time I watch one of the installments in this series I am excited to see how the participants have changed, what they've done with themselves, and how they are getting on. Sometimes what I see makes me sad -- like when one guy was going through a rough patch of homelessness and depression, or when one of the ladies was getting a divorce. Other times, I find myself enthralled with the life choices these folks have made. Sure, watching them at age 7 acting all precocious is pretty amusing, but then getting to see those same little souls hit many of life's milestones (college, jobs, marriage, kids) -- it's just so cool and interesting. And yet, it's just... people's lives. And most of them are pretty ordinary, really.

Of course I have favorites. I'm a big fan of Neil. I've always liked Jackie. Bruce is adorable. Nick is incredible. And Tony; well, I like his spirit! All of the folks are interesting in their own way. 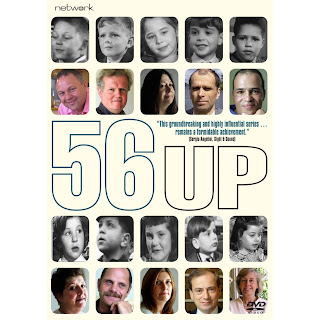 Unfortunately, I missed 56 Up playing in theaters here, recently, but here's where you might be able to see it. And in a few months, I suspect the DVD will be out and I will get to find out how many of those people have re-married, changed jobs, or become grandparents. Because YES -- I CARE!
Posted by molly at 10:15 PM