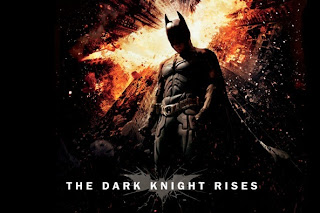 -Did Alfred get a new accent? He reminds me of the Geico Gecko now.

-Anne Hathaway did better than I expected. Not a perfect performance, but good.

-What the bleep was up with Bane? He was ridiculous all around.

-Joseph Gordon-Angels-In-The-Outfield can be pretty badass when he tries.

-I think the mayor died?? Maybe?? Yay, because I really hated that guy.

-Loved the tie-ins to the previous two films. Especially Batman Begins because that one's still my favorite.

-That was so crazy how the bad guys got into Wayne enterprises' secret rooms and took all Batman's stuff. Noooo! Jerks!

-When all the cops were finally released from underground sewers or wherever, they all looked relatively good. No hobo beards or mangy hair. What gives? I guess they were sent razors and mirrors along with food and water?

-I liked how they dealt with the Harvey Dent cover-up by Gordon and Batman at the end of The Dark Knight. How perhaps it wasn't such a good plan after all.

-Yay to Gordon learning Batman's secret at the 11.999th hour!

-Who in their right mind still lives in Gotham City? Every few years there's a major threat of the whole thing being taken over or blown to smithereens and yet people keep living there. DUDES. MOVE TO IOWA.

-Batman's flying vehicle, when flying, looked terrible. Most half-assed special effects I've seen in a big-budget film since the 90's. (Not that I go to a lot of big-budget special-effects films but this is still my opinion.)

-Did Batman die? I think he did because hello, major explosion. Of course, Alfred "saw" Bruce at a restaurant later, but let it be known that Alfred is a crazy gecko-sounding thing and he was simply not very awesome in this installment. Thus, he was hallucinating. OBVIOUSLY.

-Overall, not as dark as The Dark Knight, not as good overall as Batman Begins. A worthy third installment, though it could have been better in multiple areas.

Email ThisBlogThis!Share to TwitterShare to FacebookShare to Pinterest
Labels: movies