When I was a kid, my dad made it his goal to tape every kids' special known to man. We still have the first tape he ever used, aka My First Video Tape. Chock full of kiddie-special goodness. But you know what's sad? I haven't glanced at it in years. So here goes... let's see what's on here.... 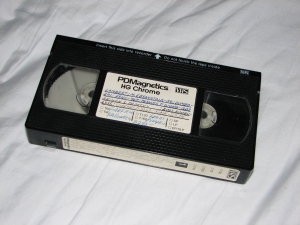 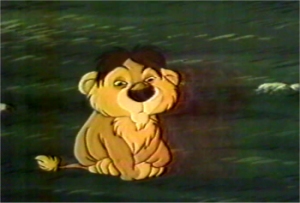 Lambert, a lion cub, is delivered by The Stork but is left with sheep instead of lions. A lonely ewe adopts him and raises him as her own. It's all well & good until Lambert realizes he doesn't look like the other lambs, and they're mean to him (it doesn't help that he's a total wimp). But the wooly critters quickly change their tune about Lambert the night a freaky-looking wolf lays claim to the flock. When Lambert first sees the wolf, he's too scared to do anything. Then the wolf goes after his mommy. Nobody threatens Lambert's mama and gets away with it! Summoning courage from within, Lambert becomes INSANELION, gives the wolf a good old-fashioned rumpkicking, and saves the day. The wolf used to scare me to death. 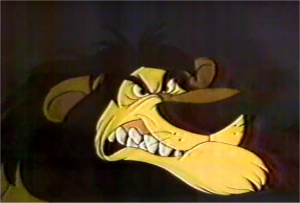 Sadly, so did Lambert. 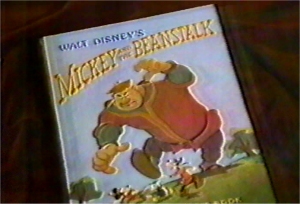 "What a very merry day, all the world is gay!"

So it's your basic Jack and the Beanstalk story, but instead of being about Jack and his greedy mother, it's about three friends -- Mickey, Donald, and Goofy -- who happen to be poor as dirt. So poor, in fact, that they are almost dead from hunger after a drought consumes all the water in the land. 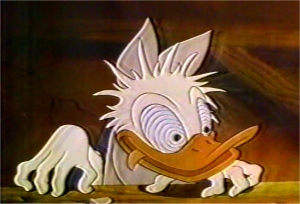 Donald is SO insane that he tries to chop up the family cow and, when Mickey takes away the axe, tries to eat the cow alive. Gross!

Of course, it all gets better (and worse) when they discover the magical land in the sky occupied by the Ghost of Christmas Present (aka The Giant). The three Disney characters cavort in the giant's food. The Jell-O proves to be smarter than Goofy... but then, what isn't? Then they rescue the magical harp that's attached to some kind of fairy princess and the giant dies and all is well, the end. 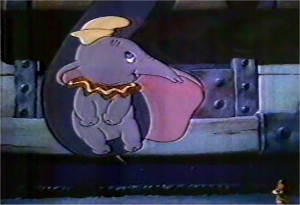 Okay, so who doesn't know about Dumbo already? Anyone? Okay good, I won't spend a lot of time on this one. I watched it about a year ago... it's sad, it's horrific, and it's about elephants.

The weirdest moment by far is when Dumbo accidentally gets drunk. And has visions of pink elephants. On parade.

It's a very depressing movie, until the very end when there's that whole message about how believing you can do something is the key to success. That part I like. The rest makes me cry. 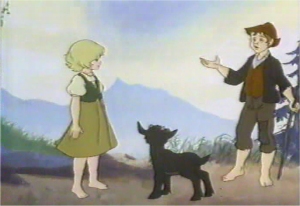 My first exposure to Heidi was this animated flick featuring Sammy Davis Jr. as a rat. I know, right? Hanna-Barbera is responsible for this film, which is really, really weird. But that didn't stop me from loving it when I was five.

Well, I didn't completely love it. 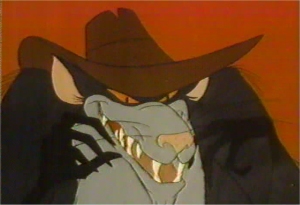 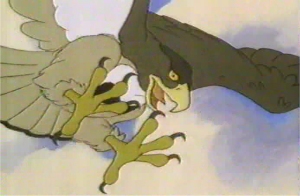 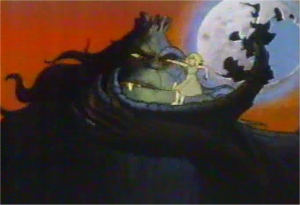 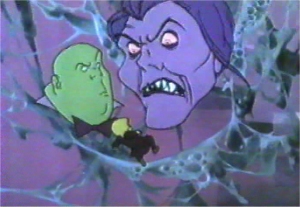 And why was this called Heidi's SONG, you ask? Why, that's because it was a musical. A musical... from Hell.

So this was the first Peanuts special I ever saw. The first of... oh, roughtly 212. In this special (which you've probably seen, so I'll keep it short), Sally is irked because Thanksgiving is yet another holiday she has to worry about. In fact, she laments that Thanksgiving is drawing near and she hasn't even finished eating her Halloween candy.

This always struck me as odd. When I was a kid, I had my own Halloween candy gone in a week -- two, tops. It never lasted until Thanksgiving. One year, I tried to make it last so I could be like Sally. Nope, not possible. 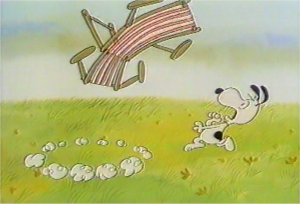 Weirdness ensues when Snoopy gets into a fight with a rogue lawn chair. Afterwards, the children discover that Thanksgiving is all about being with your friends; it's not about the food. Except in my family, it's about the food. When will we ever learn?

HOW THE GRINCH STOLE CHRISTMAS (1966) 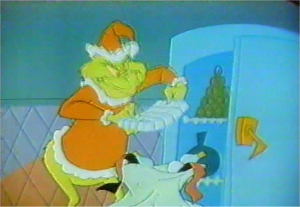 We only have half of this one on tape. Who needs the beginning? My parents saw that it was on television, and hit record. I like the part where the Grinch steals the ice cubes. And the crumb. That crazy Grinch! 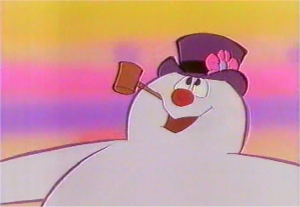 Schoolchildren are delighted when a magic top hat causes their snowman to come to life. Frosty's a jolly happy soul, of course, until he realizes that when the sun comes out, HE WILL DIE. One of the little schoolgirls, Karen, decides she will take it upon herself to take Frosty to the North Pole, where he will undoubtedly live in peace and harmony. But the magician who owned the hat is in hot pursuit of them. They get to a land of snow and then Frosty is brutally murdered in a greenhouse. Santa arrives to give Karen the old "he may be gone but he's not really gone" speech, and then Santa helps Frosty rise from the dead snow to become new again. Annnd then they dance. 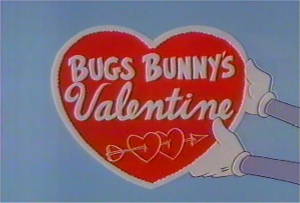 A series of cartoons featuring Warner Bros. characters in love. Elmer Fudd = Cupid, Pepe Le Pew is his usual womanizing self, and the Tazmanian Devil finds a mate. 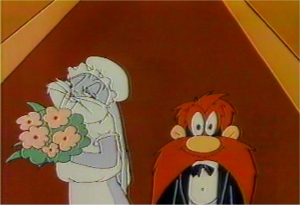 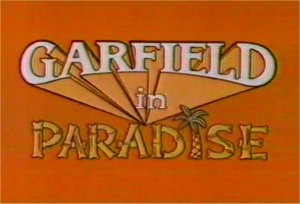 Garfield and Jon take a cheapskate vacation to a tropical island. Garfield wishes it was Hawaii. It's not. When this first aired, my dad had issues with the pause button and managed to lose a good 8 minutes of the special. 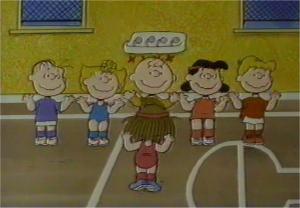 The exercise craze of the 80's merged with the Flashdance craze and this came out of it. The Peanuts get in shape, go to a party, and then Snoopy goes out dancing, wearing a ripped sweatshirt and a sweatband.

20 years later, the damn song still makes me want to get up and dance. 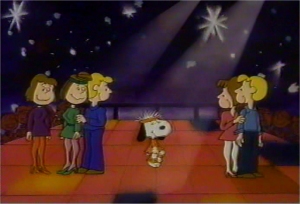 The Garfield specials never failed (or fail) to amuse me. They're just plain clever. We taped most of them. But... it just so happens that there were a few Garfield specials that had parts that... oh, how do I say this... scared the living f*** out of me. Garfield in Paradise had the killer volcano. Garfield In The Rough had the panther. And Garfield's Halloween Adventure had THIS... 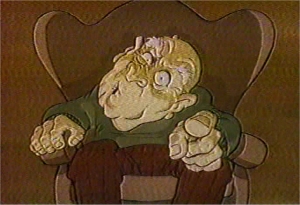 I now have an unhealthy fear of old men, and I blame it all on this.

I also have a fear of grandfather clocks.

"My boat's gone, my candy's gone, dead pirates are coming any minute, it's past my bedtime, I wanna go home." 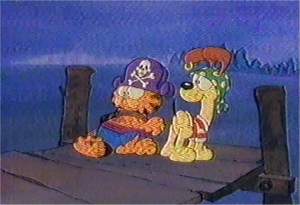 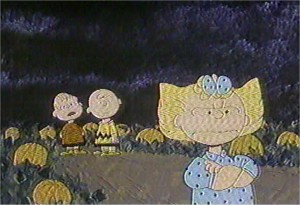 I know this one's a classic, but it never was among my favorite Peanuts specials. You know the part where Snoopy flies his doghouse through a wartorn land? Freaks me out, man. And the fact that the Great Pumpkin never came and that Linus was so disappointed... it saddened me, it really did. I like the Christmas one. But that's on another tape. And the tape ends here. Well, after a commercial for delicious beer.


So that's it, then. The extent of My First Video.

I can't believe it still works.


This article was originally published on my old website AlligatorJuice.com on November 5, 2005.
Posted by molly at 8:22 PM