On The Set Of "The Librarians"

A few weeks ago I got to work on the TV series "The Librarians," which is currently filming its second season in Portland. 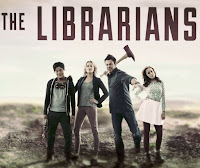 The pre-job notes for the gig were a bit longer than I'm used to seeing. Instead of asking us to bring three outfits, we were asked to bring at least two complete outfits for three different possible roles (student, professor, or dignitary) in two different scenes (one outdoors/informal, one indoors/semi-formal). Twelve outfits? Um... sure.

Our call time was 10am. We met at a parking garage in downtown PDX, where we were then shuttled to the filming location a few blocks away. Extras Holding was in The Portland Art Museum, which is one of those places I keep putting off going to for reasons that can only be described as psychological.* Several scenes would also be shot inside the museum that day.

I arrived wearing jeans and a striped long-sleeved shirt, but the wardrobe people had me change into a frumpier getup. Then I went to Hair and Makeup, and they put my hair into a schoolmarm bun using six bobby pins and loads of hairspray.

After everyone was ready, all of the extras -- about 50 of us -- were then led outside in front of the museum, which was standing in for the "Portland Public Library". Across the street, in the park, they were filming a scene. For several takes, I walked down the sidewalk in front of the museum library.

When the park scene wrapped, we went back inside and were asked to change into a second outfit, this one for a posh party scene. I had brought two dresses, one cute and sequinny and one black and ill-fitting and straight out of the back of my mom's closet. Guess which one they had me wear? Old lady dress, yes. But at least it matched my hairstyle! They also loaned me a big old greenish cardigan to go with it. Add to that nylons and dress shoes. Yuck.

When it was time to film the scene, we all trooped up the stairs of the art museum, to the Grand Ballroom. En route, we passed by a table covered with champagne and wine glasses, each of them filled with mysterious liquids and/or fake ice. We had to each take one as a prop. Then they assembled us into groups of 3-5 people. I was put in a group of 5. They brought us onto the set, which was this big room in the art museum that had been decked out with props relating to pirates and ships from the buccaneer days. There was a smoky atmosphere. Add to this the fact that I'd decided to do this scene without my glasses. I'm lucky I didn't drop my wine glass, trip over a wire, or crush a faux schooner.

They spent some time rehearsing us, having us try standing in different places, and getting things just right. In the end, I was only about two feet away from Rebecca Romijn in the scene, but I don't know if I'll be seen, and if I am, you'll see me looking way too intrigued by a dusty model of a ship. (I guess I could've just pretended it was a cleverly disguised treasure map, ala DuckTales... missed opportunity.)

We did several takes, then they had to move the lights and equipment around, so we stepped away, and after a while came back and did things from a different angle. Then we stepped away again, while they filmed a scene at a bar. They needed a few people to walk between the actors and the camera. I was one of the people picked (I think because the camera was pretty high and I'm tall? The other people who were picked were all tall) but every time we did the take, the actors finished their dialogue before I passed through. (I would've only been a millisecond black shadow anyway.) One of the other guys that was supposed to walk through the shot was freaking me out a little. He was literally clipping his nails right there on set, while mumbling to himself about wanting to eat.

At 3pm, we went back to extras holding and were given snacks. Most of us (especially nail-clipper guy, apparently) were ravenous, so that was nice. An hour went by, and then they said they were going to send most people home, but did anyone want to stay for one more library scene? I raised my hand and got picked, along with about 6 others. We changed outfits again, and then went to the catering tent for dinner. (This is why you offer to stay later... free food. I had lemon cake and some mysterious vegetable covered in pesto.)

A little while later, we went up to a different room in the museum, a library. Here, the PA looked us over and picked a few of us to be in this one scene where one of the main characters realllly wants to check out the Complete Works Of William Shakespeare. Four people were picked and three people, including myself, were not. (There's always a twinge I feel when not picked, like it's third grade gym class all over again, but I try not to let it bother me. I realize it's about the scene and the colors we're wearing, etc., and that they often have a few more people than they really need, yada. But still.) One funny thing about the set was that they had these prop books set around on top of some bookshelves. When I looked at them closely, I realized they were phone books! They'd glued pictures to the open pages to make the books look like encyclopedias. And now you know all the secrets.

I was out of there by 7pm. I returned my cardigan and made my way back to my car.

A few days later, I decided I should rent The Librarians, season 1 and get a clue about this show I'd done. Unfortunately, Netflix didn't have it; they only had the Noah Wyle movies that the show is based on. I rented the first one and seriously hated it.

I hope the show is better than that movie.

*I have now visited the Art Museum as an art enthusiast, and it is quite nice, as museums go.


(ETA: The two episodes, "And The Drowned Book" and "And The Broken Staff," ended up airing on November 1, 2015. I am visible in the first episode, in the museum scenes. This marks the first time since, um, 2010, that I can actually be seen in something I've worked on! (Though my car did get to have some screentime on Grimm earlier in the year, so... yay car!)

Email ThisBlogThis!Share to TwitterShare to FacebookShare to Pinterest
Labels: extras, the librarians

The show, which we watched all the episodes of, I hate to tell you, is not great. But I'd watch it again to get a glimpse of you!

While watching one of the scenes being filmed, I found myself wanting to tweak the dialogue. ;) Probably not a good sign. Alas, I don't even get TNT so it may be a long time before I get to see it. Still... a nice day!