Recently I got called to be an extra on Grimm again. After the last time, I was determined to make an effort to watch the show regularly, and what happened? 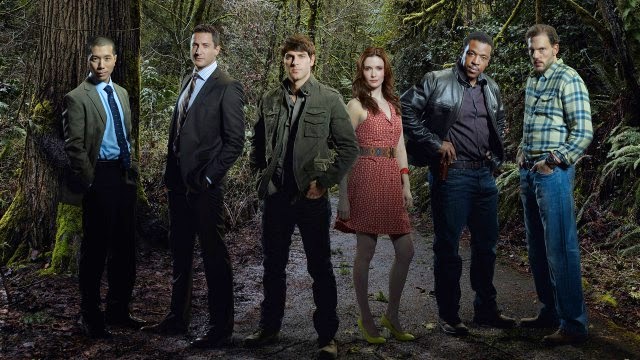 I'd like to tell you that it's because I spend my precious time doing more important things than, psshh, watching television. Why, I read thick, great novels, donate plasma to orphans, and feed stray raccoons. Baby raccoons.

But the truth is that by the time Grimm airs on Friday nights, my brain is fried from the work week, and if I'm going to watch anything, it has to be something I don't have to concentrate on. So I usually end up putting in the Colin Firth Pride & Prejudice for the 73rd time.

As usual, I can't tell you anything about the episode I worked on, not that I have much to tell, since I only had one scene, and my part (involving the arduous task of walking out of the room) lasted three, possibly four entire seconds.

But I can tell you that I was actually on set this time, a real set, on a real sound stage. I think that's a first for me. My other extra jobs have all been outside... streets, sidewalks, parks. Even just walking onto this sound stage, I felt a jolt of excitement run through me as I tried to take everything in.

The first thing I noticed was the wonderful (to me) smell of lumber, which is used to frame some of the sets. As I walked toward the "police headquarters" set, where the filming was taking place, I was greeted by the smell of old wood. (Hmm, that sounds unpleasant. But have you ever been inside an old, old house built in the 1800s or early 1900s? Assuming that house is in nice shape (as in it doesn't smell like mothballs or wet dog or something), there's just this certain woodsy smell. I'm guessing they used salvaged wood when building this particular set.) Oh hey, here's a picture: 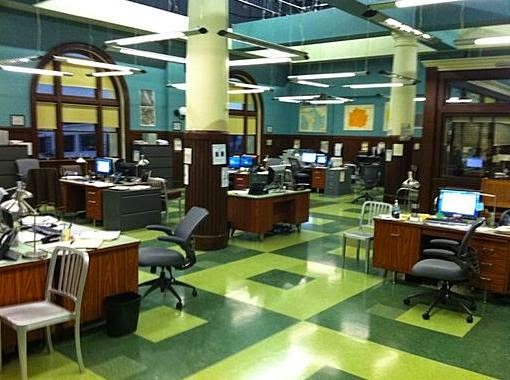 Another first for me -- I got to stick around while they did a few shots I wasn't in, and I ended up being just steps away from the director and the monitors and a bunch of the equipment. I got to watch a scene being filmed from the vantage point of the director, practically. (Okay, ten feet away, but still.) That was really fun! It made me almost want to get back into filmmaking again.

In other news, Sasha Roiz bumped into me on set (literally) and didn't even say anything. I still have never laid eyes on Silas Weir Mitchell IRL. (This is now going on my bucket list. Meet the wolf guy.) 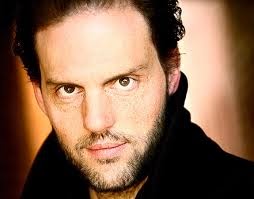 I did get to see David Giuntoli as he left the set for the day.

The food: They had a salad bar, some steak, baked potatoes, rice, ziti, a few other main dish things, cookies, and cake. Not quite as elaborate as the buffet they had last time (read: no pudding) but I'm not complaining.

So two episodes down, and very little chance at screen time on either. But third time's the charm, right?

The episode in question, Episode 4 of season 4, should air sometime in November. I'll update here when I know more.


UPDATE! The episode aired on November 14th. It was called Dyin' On A Prayer, and it involved bad guys being smothered by a demon thing made out of mud. MUD. Only the love (hate?) of a child can save the day.

I believe all of the precinct shots that were in that episode were filmed that afternoon. The scene where Captain Renard comes in and everyone claps? I was not in that scene, but nearly every other Extra that day was. A P.A. came to us and described what would be happening in the scene, then selected those that would be present for it. Alas, I was not chosen. Later in the afternoon, we did a scene where they're at Sgt. Wu's desk (I think? Sheesh, it aired two weeks ago and even I don't remember). I was there, but I didn't see myself in the finished episode (but honestly, I didn't expect to.)

The scene I got to watch from the background is the one where Sgt. Wu goes into Captain Renard's office and speaks with him, and shows him a photo of Trubel. The coolest thing about this? Captain Renard's office has a wall that can be moved (raised?). So when you're viewing his from the main part of the precinct it looks like a small office with all its walls, but if a scene needs to be shot IN it, a wall can be removed. I know this is typical Hollywood stuff, but it was cool, darnit!