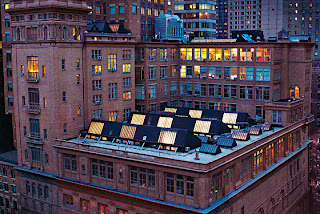 Imagine living in a spacious, light-filled studio apartment above one of the most famous venues in America, Carnegie Hall. Imagine being neighbors with artistic legends -- actors, painters, writers. Imagine living in one of those for fifty years, with your rent frozen at a mere $650 a month. $650. In Midtown Manhattan.

And then imagine it all being taken away.

That's how it was for the residents of the Carnegie Artist Studios a few years ago.

In 2007, the folks living there learned the owners of the building wanted to evict them and renovate, make practice rooms out of their apartments. Naturally, they put up a fight.
http://nymag.com/homedesign/greatrooms/42385/

In 2011, one former Carnegie Studios resident put out a documentary: http://www.huffingtonpost.com/john-farr/a-sour-note-at-carnegie-h_b_863208.html

Warning... the trailer is depressing.

I've never even been to Carnegie Hall, but this makes me so sad. I can see the beauty that was in that place, those dwellings, those people. NYC had something really neat, there, and they've destroyed it. So not cool.