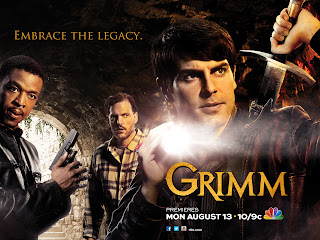 I've only seen two episodes, but I'll embrace it, sure!

So I got a call to do some nighttime background extraing on the Portland-filmed fantasy series Grimm. And my first thought was, Shoot, I've barely watched the show. Which, while true, was also sad, because Grimm has been on the air for a year and a half, and it's one of the "Big 3" Portland shows (the others being the series Portlandia and the lately-gonered Leverage.) So just about everyone knows about Grimm. Even my mother has witnessed its filming. My mother. My mother who doesn't even recognize Colin Firth if he's got a mustache.

Despite this sad fact, I knew I wanted to do it.

Now, if anyone came here hoping to find out what's going to happen in the episode, I can not say. You'll have to wait till March to find out, or go view the wiki for the episode. I don't want to spoil anyone, I don't want to get in trouble for blogging about what I saw, and moreover, what I "saw" is probably nothing resembling what we'll actually see on screen. On March 29. On NBC. Watch it.

So in lieu of that, I'll just do what I do best -- compare the experience to my other ones. Starting with the two most important factors of any extra job: Food Situation and Bathroom Situation.

What? I'm a practical woman!

Food: They fed us a delightful, catered buffet, with all manner of good things. It was like a fancy church potluck. And they were thoughtful enough to provide us with vanilla pudding. Mmmm. It was like I'd died and gone to Sizzler. We ate in this big, kind of dark, industrial-mod looking place. I didn't see any actors from the show, not that I would have recognized anyone in the dark anyway.

Bathrooms: No "First Class Port-a-potties" to write about this time, I'm afraid. In fact, no port-a-potties at all. Just regular bathrooms in Extras Holding. A fact about which one should never complain.

Extras Holding itself was a big improvement over the one we got in Walk In My Shoes, because we got CHAIRS. And coffee. And they did our hair and stuff, which is not a given on these things.

The main scene of the day was shooting across the street from E.H., and I will be the first to (sadly) admit that I was not a part of the cool group of extras who got to be in this important, action-packed scene. But then, they had to endure a 12-hour day in suits and/or high heels and I didn't, so more power to them.

Instead, I got to be a driver, wearing my regular old clothes, and I got to go forward and backward along a usually-busy downtown street for about 3 rehearsals and maybe 2 actual takes. They gave us walkies as radios, so at least we were given instructions and could hear them call "action", but it was still just... ack. Especially having to "reset" which means going back to where you started after a rehearsal or take. Which meant, in this instance, driving in reverse. In the dark. In the rain. Trying not to hit a P.A. or the car behind me or a parking meter or a homeless person. Especially since, if I did, I'd have about a hundred witnesses. And be ruined forever.

The driving scene took about 45 minutes, and the rest of the time was spent waiting. We (the other drivers and myself) were allowed to leave our vehicles and go to E.H. if we took our walkies along. I did watch some of the filming, from a street corner. There comes a point where you wish you'd brought your binoculars, but you also know that if you did, you would look like a freaking stalker psycho thing. So... no. Try to look casual. Cool. Professional. (Fail, usually.)

The other "drivers" and I were expecting to be called again, but we never were. I guess the crew got their shot. They filmed other scenes until about 11, then they wrapped, and everyone got to go home. I felt pity-mingled-with-jealously of/for the people who'd been there all day and had gotten to be in the important scene. I felt like, hmmm, I barely did anything. (Sad face.) But then, when I considered all things, I decided... you know what? Even though my role -- and I mean role as in my  duty -- was very small, they wouldn't have hired drivers unless they needed them, and so even though what I did was very small, I'm glad to have been of service to their cause and their endeavor and their show.

A show that I really ought to get caught up on.

(ETA 5/3/13: The episode was called Nameless. The scene I was present for was the one outside the Lotus (restaurant) toward the end. I re-watched the scene a couple of times... didn't see my car, though... the camera was just never at the right angle. But that's okay. I enjoyed watching the ep.)
Posted by molly at 12:05 PM