Okay. Gonna talk about my day on the set of the Nancy Travis movie.

I was so excited when I got the message saying I'd been hired to be a driver in a TV movie they're filming here in Portland. It's been 2 years since I've gotten one of those, and seriously, being an extra is something I need to do at least once a year or else I start to get cranky. I know, I'm strange.

My call time was 7am on this particular day, and the location was downtown Portland, which thrilled me because I actually knew where to go. No worrying about maps or anything. Just wake up at an unholy hour, get in the car, and get there. Park, make my way to the holding area, fill out forms, wait.

The holding area was an old abandoned building with two large rooms for our use. Tables and folding chairs had been set up, but everything else was just icky. There were actual piles of bricks in some corners, and near one pillar was a 2-foot-high pile of dirt. Suffice it to say, the cast got their own quarters. (On Twilight everyone shared a big tent and tables and got to eat the same food.)

Our first scene was down by the waterfront. I was wearing black jeans, several shirts, and my purple jacket, but I was still cold, and it kept drizzling throughout most of the morning. We did a lot of walking scenes. I was supposed to walk up to a male extra, pretend to know him, and walk down a path with him. We were supposed to kind of hug. Ironically (?) we did at first, but by the 12th take we were barely even touching. Enough is enough! We also got to walk right in front of the camera once (there's a name for that, passing in front -- I forget what it is though. Basically you don't get seen, you're mostly just a fraction-of-a-second blur, which is to imply that the characters are in a crowded place.)

(I should mention there were about 20 of us there. 3 folks had been asked to bring their small dogs. Some had bicycles. One guy was asked to be a juggler. If they ask you to bring stuff you can get a bump in pay. I got one just for bringing my car, in case they needed a driver. My car ended up sitting parked in a lot all day, heh.)

I had a short conversation with the juggler, and spoke with another extra who mentioned there's going to be a Goonies reunion in Astoria next month. Sweet! Random.

A lot of joggers and bicyclers passed by on the waterfront trail while we were filming. Some stopped to ask what was going on. Others stopped to stare.

After a few hours, they sent us back to holding, then almost immediately called us back out there for more of the same. After another 45 minutes of shooting, the scene was finally done, and they told us to change into our second outfit. (All I had to do was change jackets; though for warmth I added an extra shirt underneath.)

Next up, they took us about two blocks away to a street corner, where'd they be filming for the rest of the day. They placed us and had us do a rehearsal, then sent us back to holding for lunch. On the Sony shoot we got cold pizza, Feast of Love we got sack lunches, and Twilight we got buffet -- here we had a food cart/motorhome thing with some people cooking inside. We could have steak, fish, mashed potatoes, tortellini, and/or green beans. I got tortellini and beans, but neither was great. Then inside the abandoned building they had a salad/fruit buffet and chocolate cake. The cake was the best thing. They gave us maybe 20 minutes to eat lunch and then we went back to work. 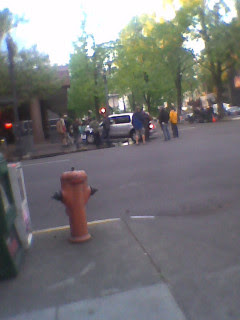 So in this scene they were shooting, Nancy Travis's character runs her SUV onto a curb and hits a Benson Bubbler. Water everywhere. The extras react with horror and concern. In one take, we had to run right up to her car window and peer inside. In another, we did the same thing, but the car wasn't actually there; we just ran toward the camera and pretend a mark was the car window. Later in the afternoon, a guy and I were placed on cafe chairs, so we got to sit while they filmed a bunch of drive-by stuff.

I got to talk a lot to the people around me. This one guy was completely hilarious; his name was B---y. He told us he got lots of extra work as a thug or a criminal, and had been told he looks like a lot of people, including Sammy Davis Jr. and the Prince of Dubai. ROFL. Then this other guy who was sitting near us told us he's always being told he looks like someone in particular. *I* thought he looked like Gabriel Byrne, but he didn't know who that was when I mentioned it. Nope, he pushed his hair back a bit and suddenly -- he was Steve Carell! It was friggin uncanny! So B---y called him "Steve" for the rest of the day.

While we were sitting there, B---y and I were talking about being extras on other projects, and he pointed out a blonde twentysomething woman who he had seen bossing the other extras around and acting like a know-it-all. "There's one on every set," he said. I said I'd never really encountered that before, but he assured me there was always one. She thus became known as Pink Shirt. Later, I found out exactly what he meant. Once, when we were all kind of gathered in a group, waiting, a random guy off the street came up and asked me for directions to the train station. After I gave them and he walked off, Pink Shirt demanded to know what he'd said, so I replied, and then she started contradicting my directions. (Except she was wrong.) The rest of the time was the same thing; she was spewing her bossy know-it-allness on everyone. And when she would, B---y and I would catch each other's eye and just start laughing. At one point, she snootily said to B---y that he shouldn't act a certain way, because "that's why you don't get asked back for more projects!" He'd already told me about the slew of projects he'd done, so that was pretty funny.

I should mention the pedestrians, because they were pretty entertaining also. Since the scene involved a car crash, and since extras usually stand around a lot, and since watching them set up shots is sometimes the only thing TO do, a lot of random Portlanders walking through the area would stop and stare. And they thought we were doing that also. They thought were were just standing around gawking. One guy even asked me if I'd seen what had happened (like it was a real car accident!) Sooo many people had to be asked to keep walking, because they'd just stop and stand there while they were trying to film. Once, a homeless woman with her cartful of earthly possession came charging right through and ended up dropping a water bottle and a triangular piece of cardboard. When one of the crewmembers stooped to pick it up for her she yelled "No, don't touch that!" She left, growling.

Back to holding around 5:30, more waiting. The building was now devoid of chairs and tables! Furniture rapture in there. Also it was cold. I stood outside in the sun for quite a while. I spoke to one of the ladies who'd brought her dog, and told her about the upcoming Doggie Dash. A homeless man tried to sell the juggler guy and me a (probably stolen) bicycle for $20 and seemed flabbergasted when we turned him down.

Then more filming, and released at 8pm.

The strange thing was, I wasn't even tired, even though I'd been out there for 13 hours. It does help to get a good night's sleep beforehand. Although the next day, I was completely dragging. That's when it hit me.

So all in all it was a good experience. I was happy to get to see Nancy Travis. The cold and the rain sucked, as did the accommodations, but I've heard other extras talk of much worse, so I can't complain too much.

I'm guessing the movie will be out around Christmas, but nobody can seem to agree on what channel. CBS, NBC, Lifetime, or Hallmark? I'll post here when I know more.
Posted by molly at 1:54 PM

Email ThisBlogThis!Share to TwitterShare to FacebookShare to Pinterest
Labels: extras