I am exhausted. It's 9:38pm, September 16th. I am lying on the bed in my hotel room in Barcelona, where I arrived about an hour ago. How I got here is basically WHY I'm exhausted.

I spent 5 hours walking around Venice. I was fortunate to learn that there is a place at the train station that will hold your luggage for a small fee. I walked all over. Saw St. Mark's Square. Went inside a church. Saw the library from Indiana Jones, where X marked the spot.

After retrieving my luggage (I made one BIG loop back to the train station) I walked about 1/3 of a mile to the dock for the Alilaguna airport shuttle boat. In my earlier plans, I had considered taking one of these boats on a longer ride. Glad I didn't. It was essentially a speed boat, the water was choppy, and amen for not getting seasick, but ugh.

From the boat dock, it was a long hike to the terminal. Finding where to check in was challenging, because my airline, Vueling, didn't have its ticketing counter on the same floor as the other airlines. Then, even after I had my ticket, the departure screens weren't listing a gate for my flight. So I finally just sat at a random gate while waiting for that info to come up.

Finally got the gate info. We passengers had to then ride a bus to the plane. One perk was that I lucked out and had no seat companions on the flight. But this airline doesn't do free beverage service. Strange. I was glad I had bought juice at the airport. 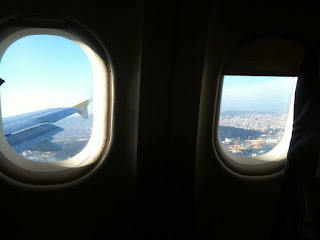 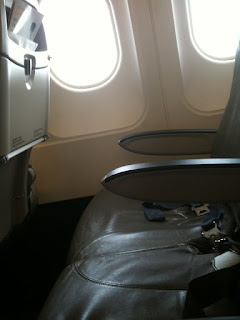 When we landed, I got out the maps and directions I had printed before my trip ever began. These printouts had proved trustworthy and useful up to this point. But... this time, they were terrible. They led me into a parking lot. Also, the signs in the terminal for buses and such are not prominent. I felt very confused. Anyway, I finally found a bus that would take me near my hotel. The ride cost 6 euro and took 30 minutes and it was growing dark. Traffic was baddd.

At long last, I got off the bus, and began the mile walk to my hotel. Thank goodness for the new directions I'd googled. On the way, I was stopped at a crosswalk when it turned green (they have red/yellow/green crosswalks in a lot of Europe, it seems) but cars were still speeding through the crosswalk. An elderly lady had come up beside me, and she started yelling and shaking her fist at the cars. And she literally stopped traffic. Brilliant.

I'm sleeping in tomorrow.
Posted by molly at 3:04 AM