Random Things From My Childhood Part 10

Well, here goes... I'm about to post part ten. Thanks for coming down memory lane with me these last few months years. More to come someday...? Who knows!? My memory is an endless treasure trove of crazy memories, as I'm sure you're well aware.

I can list half a dozen toys I had as a kid that were missing pieces (probably because we'd gotten the toy at a garage sale) and... I never noticed. Only in later years, when looking at the toy on the internet, would I see that the product I'd owned had been missing a key component or two.

So it is true with the Tumblin Weebles Fun House...

We didn't have any of that yellow track. So when the Weebles would ride the elevator to the top floor of the house, they'd just tumble out the window... and go splat, down on the ground.

Oh sure, Weebles are resilient creatures by nature. No fatalities to report. Still, we kids thought "things falling out of windows" was hilarious! How little we knew.

Nowadays, kids in our school district don't seem to go on very many field trips But in the 80s and early 90s, we were going on them what seemed like once a month. I remember going to a farm, a dairy, a restaurant, a ballet, quite a few symphonic performances, several plays, the science museum, a state park, Ft. Vancouver, downtown Portland, and more.

Some field trips were meant to be fun, but others had to have some kind of educational objective, in order to rationalize the expense, I suppose. To make them educational, we were often given workbooks or packets to complete while on the field trip. I remember these dumb things taking hours to complete, sucking any possible joy out of any field experience. Plus, what if your pencil broke? And it wasn't easy trying to constantly find a flat surface on which to write.

Way to suck the fun out of everything, school. 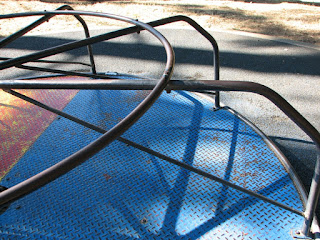 They still have these in a few places in Portland, and I've ridden them recently, and... yeah, there's a reason most of them have been taken out. Centrifugal force is no laughing matter. 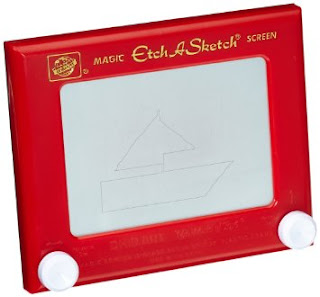 Yet another toy (see also: kites, Tinker Toys) that made me crazy. I could never seem to master those dials, and it drove me bonkers that A) if you made one mistake, you couldn't erase it, but could only erase the whole picture, and B) your drawing was always connected, with no opportunities for spaces in between.

Give me a piece of paper and a pencil any day (well, maybe not Field Trip Day.)

5. Wendy's "Give A Little Nibble" Commercial

Man, I could do a whole list just on "TV commercials that prompted me to act like the doofy people in them." As a kid, I saw this Wendy's ad and thought, "That's a great way to eat a burger!" And so, for the next year or so, I would regularly pick tiny pieces off my burgers and take nibbly bites. Prettttty sure I sang the above jingle while doing it, too. 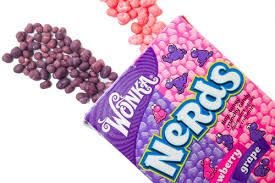 Until this very night, I had no idea that Nerds actually came out for the first time in the 80s (thanks wikipedia!).

I remember loving Nerds because they were tasty and because I liked how the boxes usually had two compartments. Compartments were nifty.

I remember being in first grade and using the candies as food for my Little People.

I also had these:

I think I still have them somewhere, which is good, because they're going for like $14 a piece on ebay. 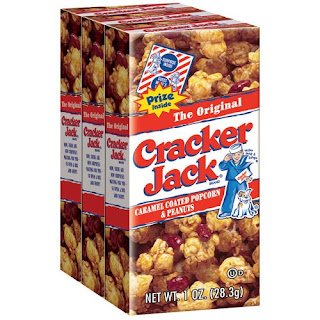 They weren't even that good. But the prize, oh, the prize!... um... wasn't ever that good either.

McGruff, like Smokey Bear, succeeded in being less about teaching prevention and more about being a somewhat scary, talking, clothes-wearing animal that I mildly distrusted. Smokey wanted me to prevent (whatever that meant) forest fires. McGruff wanted me to take a bite out of crime.

"COMMIT A CRIME, AND I, MCGRUFF, WILL EAT YOU" was the message I got.

Dear God, please save me from that trench coat-wearing dog! 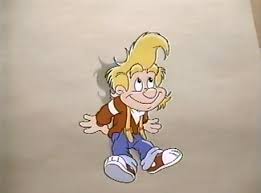 If you were a kid in church in the early 90s, and if that church owned a TV and VCR, and if they hadn't already blown their video budget on The Greatest Adventure VHSes, then you were probably subject to numerous episodes of McGee & Me (I mean, there were like 12, but they felt numerous.)

McGee & Me was about a kid named Nicholas who loved to draw and one day drew a cartoon that came to life and acted like Jiminy Cricket from there on out. In each episode, Nicholas learned a lesson about telling the truth, or not being prideful, that kind of thing. 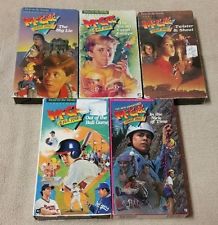 Part of me liked the show, and part of me despised the kid and his entire family.

I'm pretty sure I figured out how they did the "hiding behind the tree" trick at least 5 years before it occurred to me that Barkley was a puppet/costumed person and not an actual dog. 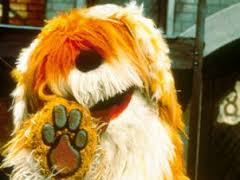 Email ThisBlogThis!Share to TwitterShare to FacebookShare to Pinterest
Labels: childhood memories, random things from my childhood