Random Things From My Childhood Part 3

The beverage of choice for field trips, picnics, and any other time you needed some reassurance that your mother loved you. Lunchables were a bit too extravagant, but Squeezits... well... I'm sure she used a double coupon.

This really is the most ridiculous game. Seven children are selected to stand at the front of the classroom. Everyone else puts their heads down and their thumbs up. If one of the Seven Chosen comes by and touches your thumb, you get to make a fist. Then, when all seven have returned to the front of the room, "Heads up seven up" is called and the seven kids who've had their thumbs tapped get to stand (usually eight or nine stand, since one of the original choosers can't seem to keep it to just one pick.) In turn, each kid guesses who touched them (helped significantly if they got a peek at the passerby's sneakers). If they get it right, they take that kid's place. If you are a rather unpopular child, you will either never get your thumb tapped or, if you do, your tapper will vehemently deny ever touching you, smile smugly, and continue being one of the Chosen while you look on forlornly. Not that I personally know anything about this.

So. I didn't go here until I was six, and I'd seen commercials for the place and in one of them, a kid shoots down a slide and lands in Chuck E.'s arms, and I was convinced that this was how you entered the restaurant. Everyone gets out of their cars, climbs a ladder along a stone wall, and sliiiides into the building. Yeah. So it wasn't like that, but it was still awesome. The rides, oh the rides! Little space ships that you could maneuver high into the air. Skeeball. Claw games. And who can forget the almighty ball pit?

The place is so different now. There's a tubey thing to climb in and a lot of dinky little rides that don't go up in the air. And where it used to be kind of dark and divided into rooms, it's now bright and open. Really, it kinda stinks. 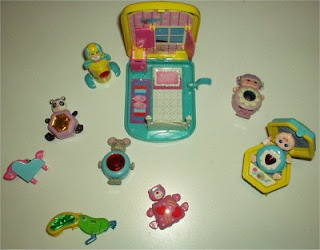 For every "boy" toy, there must be an equal or opposite "girl" toy. My Buddy? Meet Kid Sister. Mr. Potato Head, may I introduce you to your bride? Transformers, meet... uh, these, I guess?  Sweet Secrets were little plastic jewel things that could change into animals.  Some could be worn as jewelery, some had makeup inside, and others were things like notepads or tiny pianos. Unfortunately(?) they were not popular enough to either be A) long-lasting or B) made into a Michael Bay movie starring Shia LeBeouf, but I loved them and still have them to this day.


5. Race For Your Life, Charlie Brown

Originally I was going to write about FlashBeagle, but then I remembered this! Race For Your Life, Charlie Brown was a feature film from the 70s that I watched in the 80s and thought was amazing. Charlie Brown and his friends race a group of bullies down a treacherous river one summer because, apparently, that's what you do at summer camp. At one point, Snoopy becomes separated from Woodstock, and their resulting woe is almost unbearable to watch. 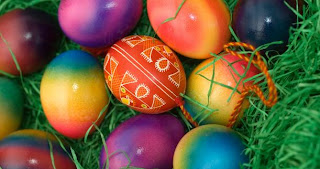 As a kid, Easter was my favorite holiday next to Christmas. First, we decorated the house. My mom had an egg made out of sugar where you could peek inside and see a springtime scene. Then there was the dyeing of the eggs, a chance to be creative with your food. Next there was Easter morning, with a basket full of goodies waiting for you in the living room. And then the glorious Easter Egg Hunt, where it didn't matter if they were real eggs or plastic ones filled with jelly beans, searching for them was a blast.

Eloise Wilkin was a children's book illustrator whose beautiful illustrations made the books come alive for me. This was one of my favorite books as a wee lass. I made the realization later in life that most of the picture books I loved as a kid had something in common: food. If there was somebody cooking, somebody eating, or even someone passing a candy store, I liked that book. But with Eloise Wilkin, it was different. Instead of food, there were nightscapes and snowscapes and little cherubic children in frilly dresses holding hands and running around a meadow. They were like Normal Rockwell paintings for tots. 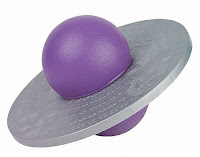 Otherwise known as the toy in the garage that my mom has been unsuccessfully trying to get me to throw out since approximately 1991. 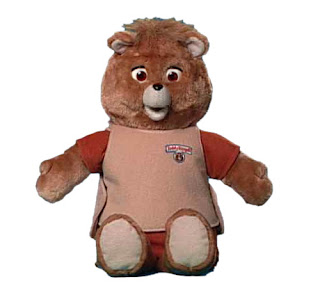 Just as I thought you used a slide to enter Chuck E. Cheese's, I was certain, from viewing the commercials, that Teddy Ruxpin was the most magical bear in the universe and could, indeed, talk. Circa 1987 our neighbor, who'd bought the bear to have when his grandchildren came over, brought Teddy to our house for a visit. Though I was very excited to see Mr. Ruxpin, and had a merry old time listening to his story, I was a bit dismayed to discover that he was more or less a very furry, very adorable, somewhat spendy audiocassette player. Away went the magic.

I'll end this blog entry on a musical note. When we finally obtained a Nintendo in the early 90's, one of the games my brother bought was Final Fantasy. Sometimes he would even let me play it with him. Maybe it's the memories of the time we spent together in those days, or the fact that the game was really fun, but whenever I hear these pieces I get enormously happy.

Email ThisBlogThis!Share to TwitterShare to FacebookShare to Pinterest
Labels: childhood memories, random things from my childhood

I'm very much enjoying these blasts from the past.

And, I confess, I ALWAYS cheated at Heads Up 7 Up. Every single time. Head on arms towards the edge of the desk provides a perfect window for sneaker viewing.

Oh Amy... I don't think I will ever be able to look at you the same way again!