Last year I wrote about my first "big deal" acting experience -- as a no-lines, can-barely-be-seen ghoul in a small-time production of The Lion, The Witch, and the Wardrobe. I wrote about how I couldn't stop giggling (instead of cackling), and nearly got booted from the play.

But that wasn't my first unfortunate acting experience. Oh, no. Let's not forget the Church Christmas Musical of 1988.

At last, I was old enough to join the kids' choir. Not only that, but the director wanted to give me a speaking role! It wouldn't be much -- I'd just have to walk up to the microphone and recite part of a verse during a musical interlude -- but I'd get to be the center of attention for five seconds, and how could I not appreciate that?

Oh, well, maybe because it turned out to be THIS verse...?

Isaiah 40:10 -- "He shall feed his flock like a shepherd: he shall gather the lambs with his arm, and carry them in his bosom..."

Now, I didn't know exactly what a bosom was, but it was definitely goofier-sounding than womb, which had something to do with Mary's stomach, I knew. But bosom... well, it sounded like boo and maybe bottom, and I was convinced that if I got up and said that word in front of a congregation full of people, they would all burst out laughing. And possibly throw tomatoes. And hymn books. It would be like getting up and saying poo. There was no way. I couldn't.

And yet -- I did. There's not much more to this story. I may have whined about having to do it, but my parents worked me through it. I practiced at home. I said the line on the big night and nobody audibly laughed. And then it was over.

I've had a lot of these little moments in life. Moments where I had to do something I felt very uncomfortable doing, but just went ahead and did it and felt a flood of relief. It's better, I've found, to just go ahead and get things over with rather than stress out over them.

So why can't I just call an eye doctor and make a darn appointment? (Says the lady with the glasses whose frames' color has nearly all been scratched off.) Girl, just pick a clinic. Just call. Just go. Yeah it sucks when they do that stupid test and then make your pupils look like moons, but so? So what? You'll feel better afterward! Just do it!

Besides, it beats having to say bosom in front of five hundred people, and if you could do that when you were eight, well, these days you oughta be freaking unstoppable. 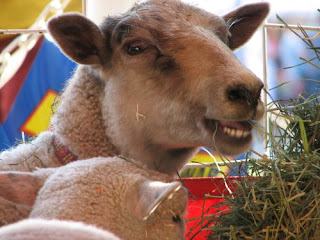