Like a lot of kids, I wanted to be an actress. Or at least famous. I was so jealous of children on TV, especially those who were my age. One of my favorite pastimes was playacting, so I figured I'd be a natural at the real thing. If only someone would give me a chance! Find me! Cast me! Put me on your show! I'll knock your socks off!

My first chance came at age six, when the school music teacher graciously decided to place me onstage as a squirrel. I think the play was Chicken Little. I don't know... one year it was Chicken Little, another year it was The Little Red Hen... I think the music teacher was obsessed with birds. Either way, we did this play and I got to be a fuzzy rodent. I had no lines; all I had to do was sit there, but at least I was there. But my favorite part of the whole gig? My costume. I just wore my regular clothes -- a party dress or something -- but on my head was a headband with two little squirrel ears glued on top. Headbands were a big deal to little girls in 1987, and strangely enough, I didn't own any. And here I was with one, and I got to KEEP it after the show. Awesome!

Somewhere in one of our photo albums, there's a snapshot of me in this play. The three other girl-squirrels are sitting daintily on a bench, watching the action unfold in front of them. I'm sitting farther down the bench, and it looks like I'm eating my fingers. Oh hey, here it is... 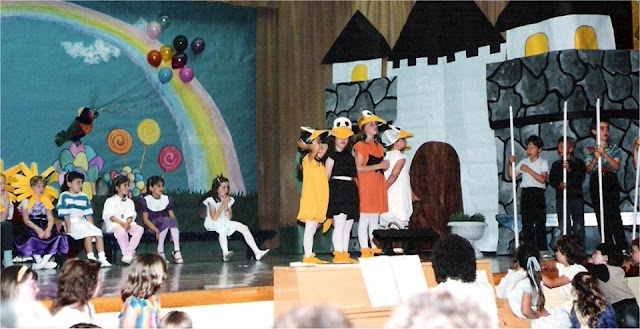 So... no calls from Hollywood that day. Still, I had enjoyed the experience of being up on stage, wearing a headband, and feeling special, so a couple of years later, when some people from our church decided to put on a stage production of The Lion, The Witch, and the Wardrobe, I was all in. I had already seen several stage productions of it, and I'd seen the WonderWorks TV-movie and knew all about it.

The auditions were held. Like any self-respecting eight-year-old girl, I tried out for the part of Lucy. So did a bunch of the other little girls in my Sunday School class. The boys tried out for Edmund. 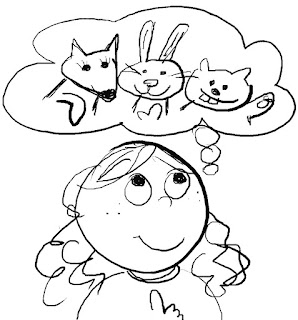 However many days or weeks later, some friends of my parents came over for dinner. Their son was my age and had also auditioned, and he had just learned he'd gotten the role of Edmund. That evening, my parents got a phone call saying I had gotten a role, too. I was going to be a "little animal."

Okay, so I wasn't Lucy. But at least I was something!

Hmmm, which animal I would get to be? A fox? A rabbit? Oh well, didn't matter, as long as it was cute and adorable, like me.

I don't remember exactly how I found out the truth, but the truth was devastating. The other girls in my Sunday School class, who were also told they'd be animals, were given roles of a bunny and a mouse and a cheetah and so forth.

I, along with one younger girl and three older ones, were politely informed we'd be playing "witches and ghouls." You know, the ones that get to help kill Aslan. 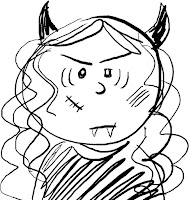 I had been TRICKED! A small animal is NOT the same as a ghoul. Curse you, casting people! How could you do this to me? 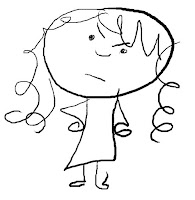 It's funny, because looking back, now I can appreciate being cast as a little demon-thing. But at the time, I took it very personally. I was convinced that the director chose me to be a ghoul because I was either an ugly person or an awful one. Never mind the fact that the other ghoul-girls were perfectly nice, pretty people. I was just sure that this was some kind of personal statement against me. (Keep in mind, I was eight.) 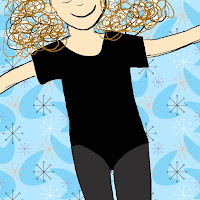 But it didn't take long for me to warm up to the idea of being a ghoul, namely because I found out I'd get to wear a black leotard and tights. Maybe it was the era, or maybe I was just insane, but I thought that combo was even better than a headband! A LEOTARD and TIGHTS? Now all I needed was jelly shoes and a side ponytail and I'd be the most radical person EVER -- like, totally!

So I had the part, and I had the costume, but now I had to act. Survey says: I was a royal disaster. During the first actual rehearsal where the five of us had to come on stage and cackle and make a kind of rumpus, I could not stop giggling. Well, it WAS pretty silly. We were acting like freaks in front of everybody. I was very embarrassed.

Some time later, the boy who played Edmund secretly told me that the director was considering firing or replacing me at that time. How Edmund knew this, I don't know; I think his parents were involved with the play, too... but still. I was shocked. I knew the director already hated me and thought I was ugly, hence his casting me as a lion killer, but then to think I was untrainable, or a hopeless actress on top of that? Ouch! 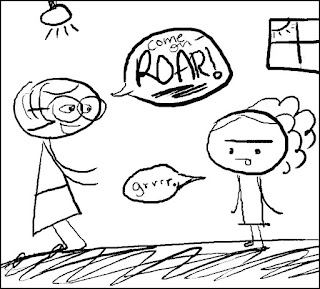 My parents must've gotten wind that I was in trouble, because I remember my mom coaching me at home. I would have to practice walking into a room and growling and cackling, without giggling. I remember I caught on pretty fast. I think it was as if, at first, I was embarrassed because I was behaving in a way I thought I wasn't supposed to. But my parents said no, no, it's okay to act like this... on stage. This is your job. And after that I was okay.

Rehearsals, as I recall, were pretty boring. The other ghouls and I only had one scene, but I was present at a lot of the rehearsals and had nothing to do. Luckily, the building we were in provided a sort of playground atmosphere. The play was taking place in the newly-purchased church "Annex" building. There were three floors and a multitude of staircases all going in different places. It was an amazing place to play tag or hide-and-seek. And play we did. I got to know that building fairly well by the time Lion was over.

And what of the actual play performances? Well, I did my best. I cackled with the others. We had six or eight performances in all. Friends and family came to cheer me on.

I don't have any pictures of me in my costume. We do have a video of one of the performances, but the ghoulie scenes were in near-darkness and you can't see me. For all anyone knows, I wasn't even there.

(EDIT: 10/13/19! I FOUND A PICTURE!
I DID NOT KNOW THIS EVEN EXISTED!
I'm two over from the reindeer.
I love how they stuck all the "evil" characters off to the side, even the titular Witch.
Whatever, we throw the best parties.) 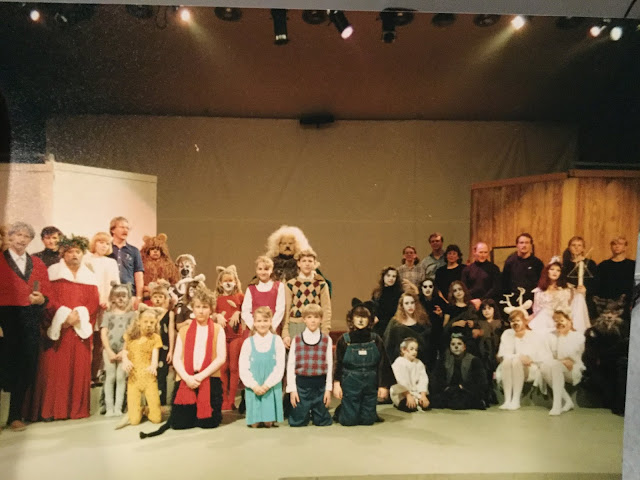 Near the end of the play's run, I remember the director decided to give an award to someone who was so dedicated to her part that she stayed in character even when not on stage. He gave it to this girl who played a bunny. Yes indeed, she had always been cute, wiggling her nose and her tail and being sweet to all. Go her. I was so ticked, though. If I had acted "in character" off stage, I would've been spanked to the moon!

There was no justice. 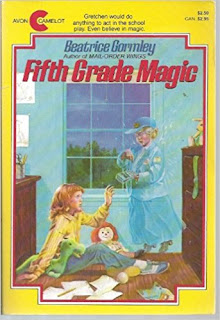 A few years later, my teacher at school read aloud a book to us called Fifth Grade Magic. In that story, the main character, Gretchen, who loves acting, is denied a part in the school play. (Her teacher doesn't even hold auditions, she just gives out parts based on personality and looks.) The lead role in the play goes to Amy, the teacher's pet, who, as it turns out, can not act. Gretchen is furious. As events unfold, Gretchen seeks the help of a fairy godmother (sounds cheesy, but it works) and tries to sabotage Amy. In the end, Gretchen, who has memorized all the lines in the play, has to fill in for the boy who was playing the villain. She outshines Amy by a country mile, and actually revels in playing such a delicious part. Even though she didn't get what she wanted, she got something even better.

It was then that I realized playing a sinister or naughty character didn't mean that's who you were, or who people thought you were. It was just a part like any other, and if you looked at it a certain way, it could be even more fun than playing the "good" one. 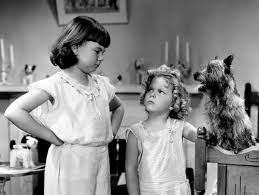 Some years later, I read a quote that seemed to seal the deal that getting cast as a baddie wasn't so... well, bad. Jane Withers, a one-time child actress who lost a few roles to Shirley Temple before getting cast as a brat (alongside Shirley's perfect character) in Bright Eyes, had this to say about that role:


"On that film [Bright Eyes], I had to play the part of the meanest, creepiest little girl that God ever put on this planet. In the movie, I ran over Shirley Temple with a tricycle, and a baby buggy. And I thought, oh dear, everybody's going to hate me forever because I've been so creepy mean to Shirley Temple! But you know, they weren't? And I was flabbergasted! I got hundreds of letters from little kids that said thank you for running over Shirley Temple with the tricycle and the baby buggy, she's too perfect! And we'll root for you any time! And right after that, I got my first contract with 20th Century Fox, the same studio that Shirley was under contract to, and then they started writing films for me."