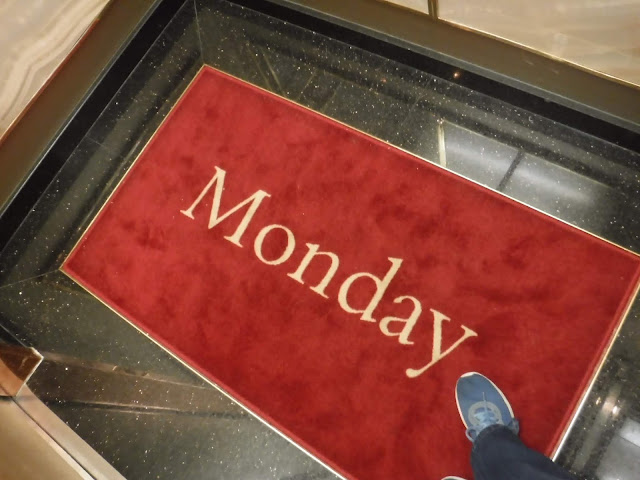 Halifax day! Once again, I woke up to the shipwide announcements. Outside, it was very foggy. I decided to wait to leave the ship until it was time for my excursion, and then walk around afterward. On this particular day something was going on with the cruise terminal. Our ship had to dock at a terminal where passengers weren't allowed, so they had to shuttle us from the ship to the main terminal. It wasn't a big deal, just a minor inconvenience.

After getting dressed, I went up to Lido, where I grabbed coffee, a banana, and two pastries, and brought them back to the room to eat them. Then I read my book, napped a bit, and tidied the room in preparation for the room hosts to come. I hate having to tidy while on vacation, but if you leave stuff lying around, the room hosts will pick it up and do weird stuff like fold it or stack it. And so... I tidy. 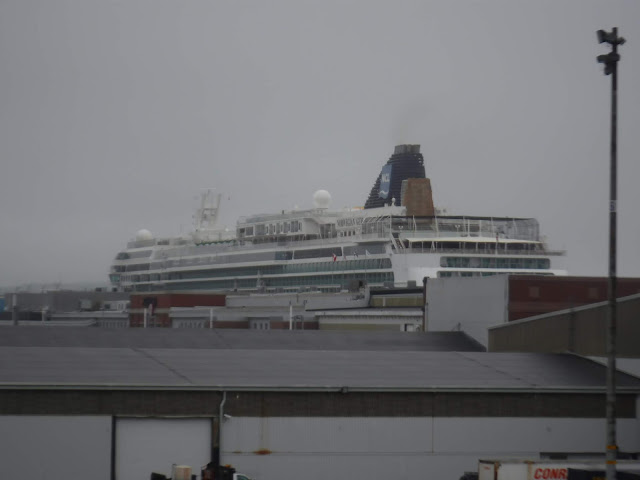 Look at those gray skies! When it was time to head to my excursion early that afternoon, I got off the ship, took the shuttle to the cruise port, and walked across a big parking lot to where the horse & trolley were waiting. The Norwegian Gem was in port with us that day. 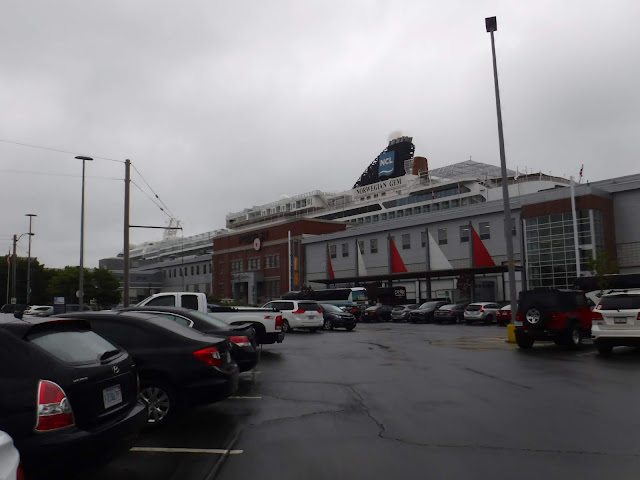 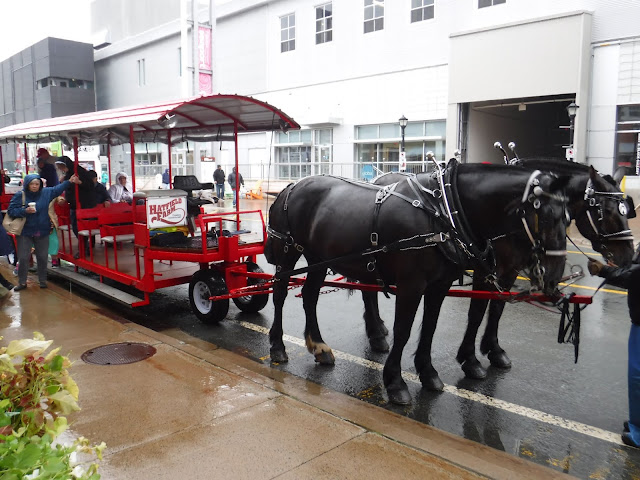 The horse tour was nice. The trolley had a roof, but the sides were open, so I was grateful I'd dressed warmly -- and that the tour folks provided blankets.

The horses pulled us all around town. There are so many neat old buildings in Halifax! 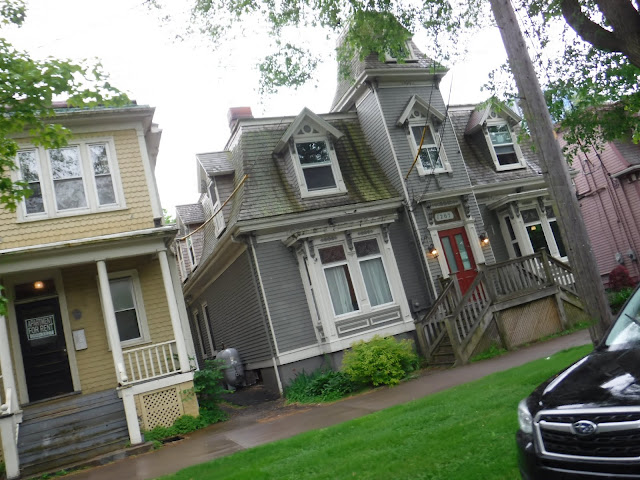 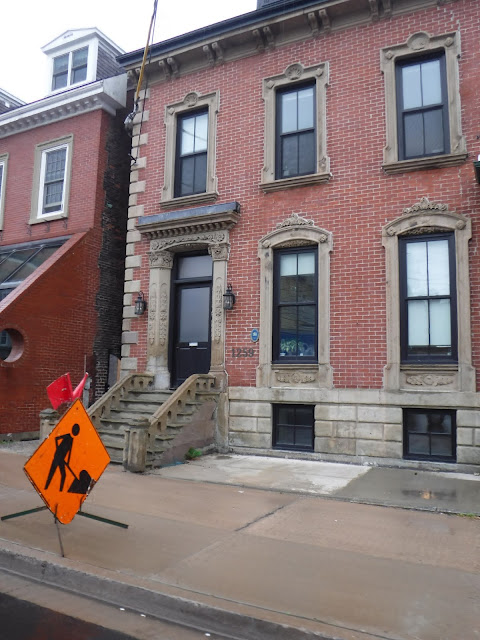 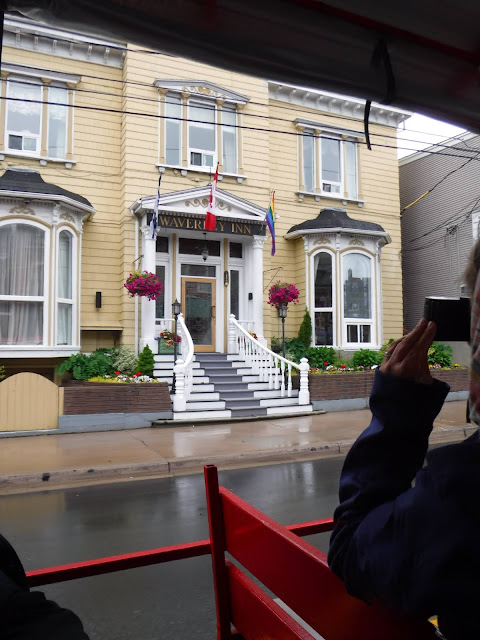 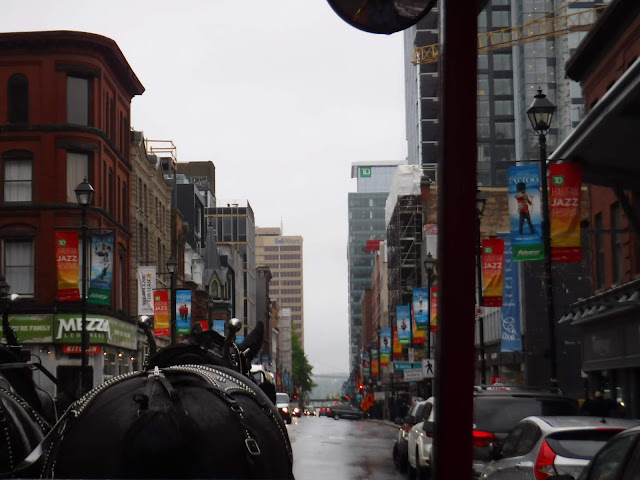 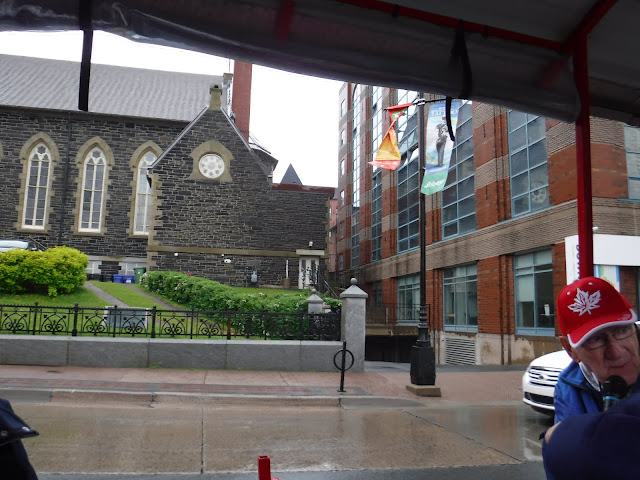 Our tour guide, Bob, gave us lots of information as we trotted along. The tour lasted about an hour. It's a pretty nice way to see the town. Overall I would say that this tour was a great choice, especially on such a day. It beat riding around on a tour bus by a long shot, and I wouldn't have been able to easily cover so much ground on foot. 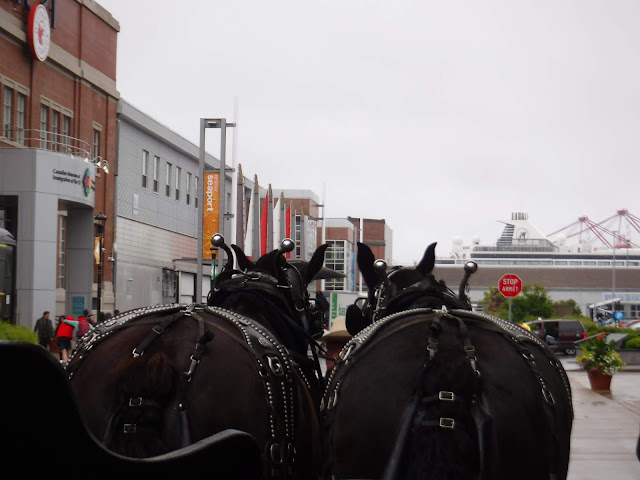 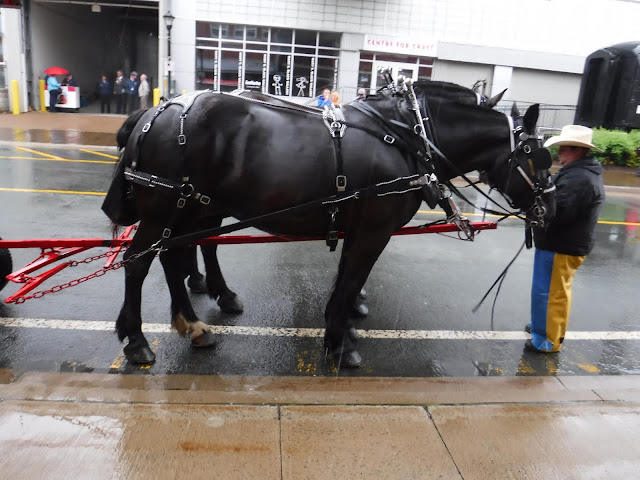 At the cruise terminal building, I used their free wifi and did some of my only souvenir shopping of the trip, picking up a few small "Nova Scotia" items. 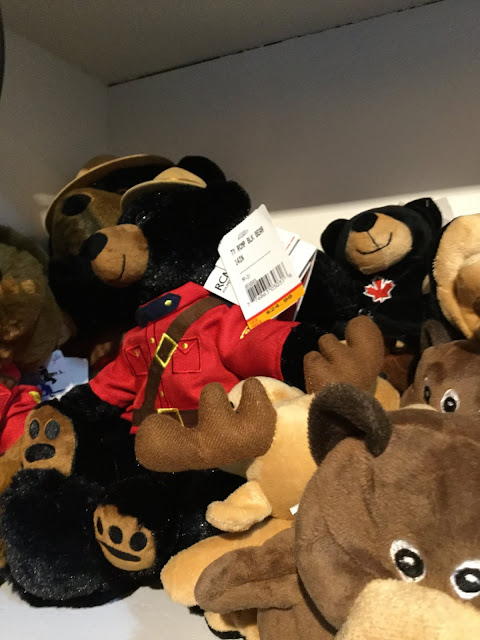 Anne might look a bit out of place here, but keep in mind, the character was born in Nova Scotia! 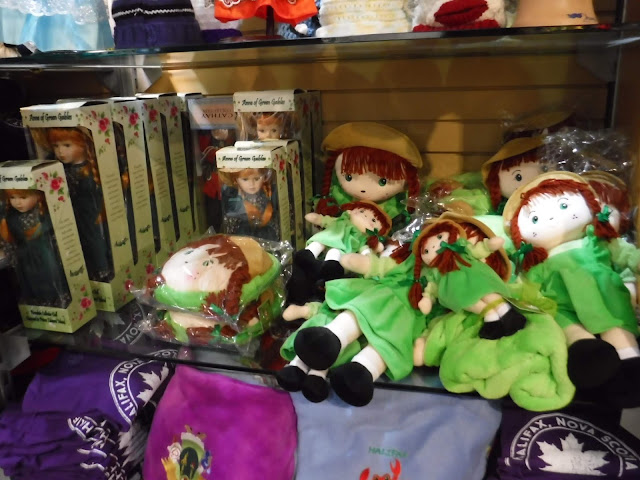 No doll purchasing for me, though.

I returned to the ship around 3pm. It was just so cold and rainy, I didn't feel like going anywhere else. The maritime museum will have to wait till my next trip to Halifax.

Almost immediately after boarding, I headed up to deck 11, where they had this grill place that was open until 5pm each day. I got their "Freestyle Burger," which had portobello, cheese, tomato, lettuce, avocado, and some delicious sauce. It was really good! 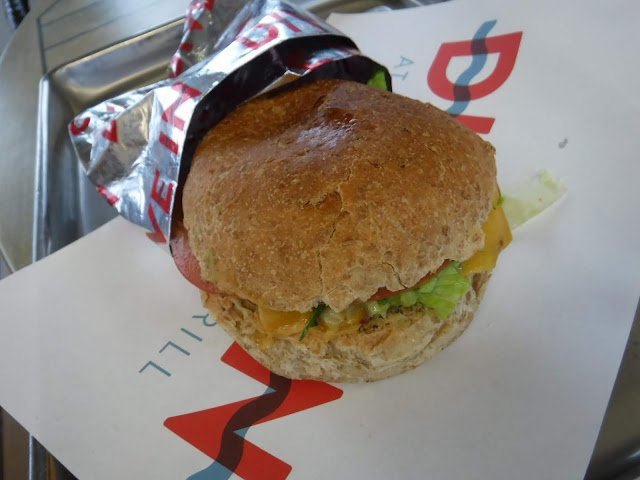 And then... another nap. Yeahhh.

Afterwards, I went to deck 6 and sat on a lounge chair. The boat didn't depart quite on schedule today. A bagpiper played some tunes from the dock before we left, though. Eventually, we pulled away, and I took a few pictures. 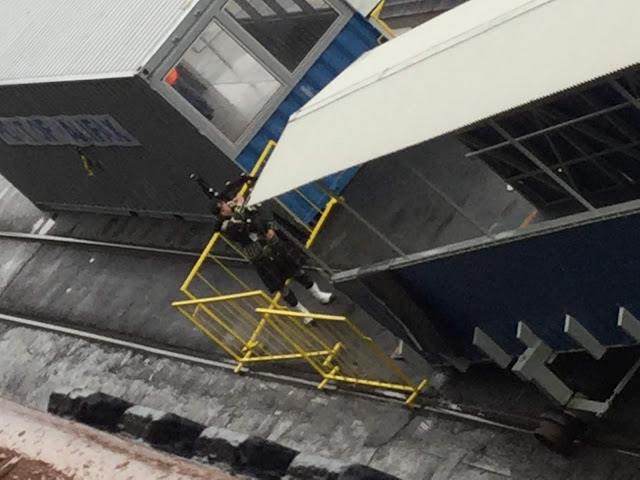 For dinner that night I had pasta with white sauce & mushrooms. They had this pasta bar where you told a cook what ingredients you wanted and they cooked it in front of you. This meal turned out okay, nothing great. I also had a bowl of fruit, a cheese & nut tray, and pear strudel. I will say the abundance of many varieties of fresh fruit each day was a real treat. 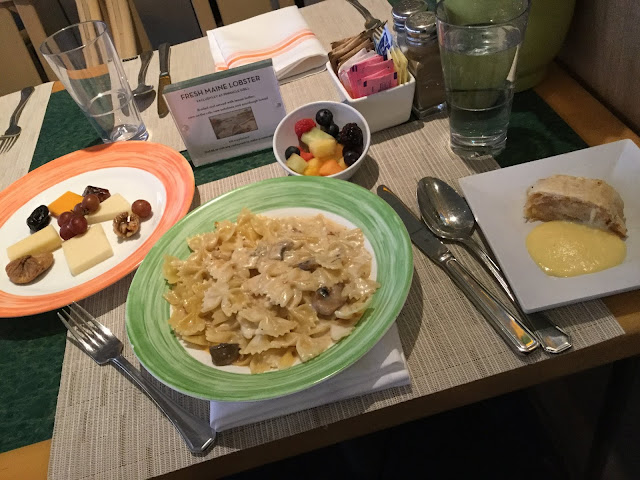 I don't know if you can click on that photo above to enlarge it, but if you can, check out the "Fresh Maine Lobster" sign and see if you can catch the typo. What's sad about it is those signs were on every table.

I kept catching typos in the ship's app, too. For your amusement: 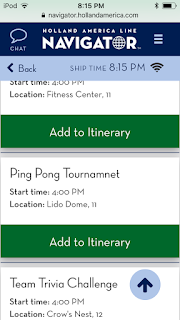 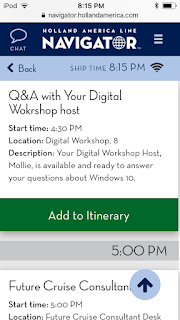 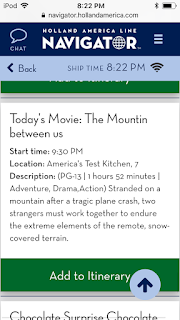 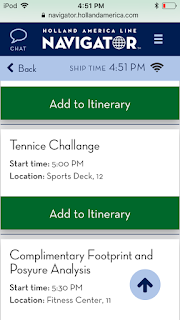 I know I'm prone to typos too, but somehow... this amused me.

The boat was really rocking tonight.

I went for a dip in the hot tub sometime that evening. The hot tubs seemed so exposed, as if you were on display for everyone walking by. Few people seemed to be utilizing them, though, so I gathered up my nerve, put on my bathing suit, and went on up. Between the rocking of the ship and the really strong bubble/jets on the tubs, I kind of felt like I was sloshing around in a boiling pot of soup. I guess I prefer hot tubs with gentler bubbles. I never went back.

Around 9:45, I went to the Explorations Cafe with a yearning for hot chocolate. There were two crew members behind the coffee counter, so I stepped up to order. But... they told me sorry, they had closed at 9. Huh? Then why are you behind the counter? Besides, there were no signs listing the cafe's hours anywhere that I could see.

I eventually found, via the daily brochures, when the cafe opened (7am) but there were no closing hours. Do better, Holland. People want their 9:45 hot chocolates. 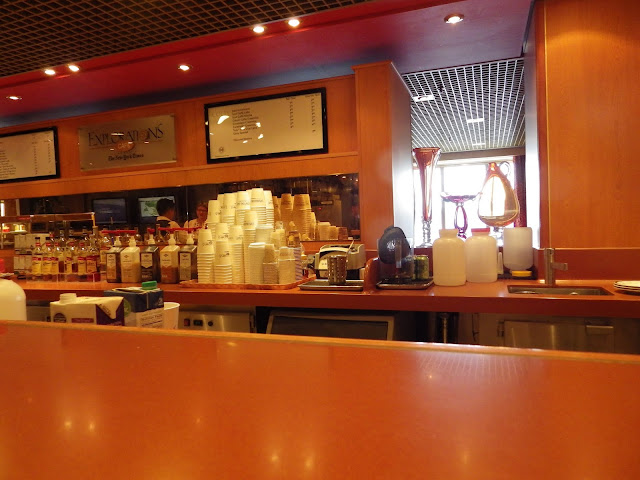 I was also confused by Lido's hours, since I didn't see them posted anywhere at first. Eventually I found those in the daily brochure, but prior to that, it was really frustrating walking up to get food and finding out that all the stations were closed and there was no food to be had for a hungry soul.

On day 4 or so I learned that the hours were:

Back at my stateroom, I decided to order room service. I picked up my stateroom phone, dialed the number, and got a beep, beep, beep! I tried several times and never could connect. Sheesh!

They did have room service door hangers in the room, though. Since I had an early excursion planned for the next day, I placed an order and hung it on my outer doorknob.

Would it be picked up? Would I get a delicious breakfast, or be denied food once again?

Find out next time...