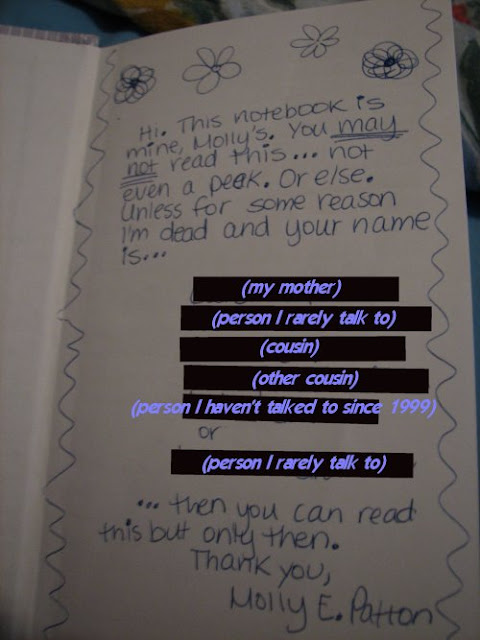 I'm re-reading my journal from age 16, thinking there might be something I can re-post here and be all nostalgic about. After all, 16 is exactly half of the age I am now.

But the more I read, the more awkward I feel, and the more I realize... MAN, I was dorky. Yeah, I still kind of am, but at least my current dork-self is one I'm fairly comfortable with. The 16-year-old dork is just... creeping me out.

But why should reading these make me uncomfortable? I was young and silly, then. I should be able to laugh about her now. But somehow I can't. That 16-year-old girl wasn't a totally different person. That was just an Early Me. Molly 1.0. She's still a part of me.

Sixteen-Year-Old Molly In A Nutshell

--She is obsessed with TV. Nearly every other journal entry is about the shows she watched that week and what she thought of them and what shows she's looking forward to watching. Her favorite TV shows as of 1/23/1997 are as follows: Lois & Clark, The X-Files, The Pretender, Sabrina The Teenage Witch, Ellen, Friends, Drew Carey, Something So Right and Caroline In The City.

--She likes listening to the radio. Her favorite songs are: When You're Gone by the Cranberries, Wannabe by the Spice Girls, Lovefool by the Cardigans, You Were Meant For Me by Jewel, Where Do You Go? by No Mercy, You Learn by Alanis Morissette, Hook and Runaround by Blues Traveler.

--She loves going online, via Compuserve, and reading messages on the L&C forums. She also enjoys going to "conferences" (aka officially-scheduled chatroom discussions.)

--Desperate to save her favorite TV show from cancellation, she's sent off multiple letters and postcards to the network and the production studio. (Gotta love that optimism. The show is cancelled.)

--She admits to having dreams about Egg McMuffins. (Actually, those sound pretty good right now.)

--ABC was running a bunch of shows with 3D sequences that spring, so she somehow procured the 3D glasses in order to enjoy them. (Didn't they come in cereal boxes or something? The 3D shows didn't get the ratings that were expected so the idea never progressed beyond that one week. Funny, though, that 3D is all "in" again in the 2010s.)

--She was beginning to collect Pez dispensers, and as of June of that year, had sixteen of them. (I stopped collecting them a few years later, when I had probably 100 but lost count.)

--That summer, her family switched from Compuserve to AOL. (AOL offered unlimited minutes, for one thing, and most of my friends and relatives had already migrated there. In those days, you pretty much only communicated with people who were on your ISP; the internet didn't seem as "connected" then as it is now. If someone was on a different ISP you could email them but not chat with them.)

--After a summer trip to Disneyland, she declared: "Disneyland was great! It was fun, getting to hang out with Amy and Emily. I got lotsa souvenirs, too. The best one? A Superman towel! Seriously! Is that cool or what??" (Hmmm.)

--She published her first web page, on Angelfire. (You know how they say everything you post on the internet lasts forever? Well, not 1997 Angelfire web pages, apparently. That thing is long gone, through no fault of my own. I remember also using Angelfire email in our high school computer lab to get around the school rule of: "No Hotmail." Haha remember Hotmail?)

That's about the gist of 16. Seventeen would hit and I'd become enamored with Titanic, Dawson's Creek, and Buffy.

But all this reading has made me want to go curl into a ball. So we'll just have to save seventeen for another day....
Posted by molly at 2:57 PM

Email ThisBlogThis!Share to TwitterShare to FacebookShare to Pinterest
Labels: teenagerhood

We did have fun at Disneyland! :-)

I wish there was some way to think back on my past without being overcome by mortification...but mostly I myself just want the ground to open me up & swallow me when I start reminiscing. Are there people who don't feel this way? If so, I would like to know their secret.

Amy: You know, it WAS fun -- because Disneyland is fun, because you and Emily and Stan are always fun. I just look back on that summer and realize how not-myself I was. I've always wished we could do the trip over again, :)