i can haz computers?

Running a school computer lab (my new job!) has made me think a lot about when I was in elementary school. (Oh, here it comes...)

In the beginning of my educational career, there wasn't a single computer to be found in our school building. But around 1988 they got a dozen or more Commodore 64s. I loved those things! The teachers taught us how to program on them. Typing, typing, and more typing would produce... an octagon. Yay. Once or twice they let us run games. I was all over DD's Playground, of course. 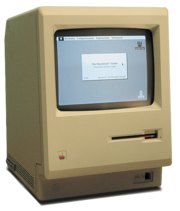 I remember the day the librarian introduced us to a Mac. It had a mouse. (LOL, a thing that is a thing that is not a rodent!) There was this little tutorial on the computer where you could practice clicking and dragging, like, a piece of paper and put it in a trash can. BEST. THING. EVER. I would sit there and just throw the little piece of paper away, over and over.

In junior high, we had two roomfuls of Macs. Same with high school. They took floppy disks. You could save your work on one, and use it on another computer... until it got an error and died. Also, the computers now had the internet! It was so exciting. My friends and I would use it to chat with each other, while sitting right next to each other in the lab. Yep. We were oh so clever and awesome.

In the early 2000s, when I first began working in an elementary school, they had just acquired some brand shiny new blue iMacs. Remember how iMacs came in all those colors? So pretty. Ten years later, those same blue iMacs are basically just big blue paperweights.

These days in our computer lab, they have bright, shiny silver iMacs. Those have replaced the 50-pound eMacs we had from 2002-2008 or so. (Yes, fifty pounds. We still have a bunch of them in the lab, and I've been delivering them to different classrooms this week. When this job description mentioned "lifting up to 50 pounds," I always imagined that sentence pertaining to a fallen-and-can't-get-up child on the playground, not a computer with bricks sitting inside it. Seriously, bricks. Why would a computer contain bricks? I don't know! WHY ARE THOSE COMPUTERS SO HEAVY? On the bright side, I guess they're pretty robber-proof. You'd have to be crazy to try to steal one. Well, also because they're crappy.)

Nowadays, with just a few clicks, a kid can get online and chat in realtime with people from all over the world. They can blog about their field trips. They can watch how crayons are made.

That totally beats making an octagon.

And throwing away a sheet of virtual paper.

Though I'm not sure that it beats DD's Playground... that game was the best!
Posted by molly at 9:50 PM