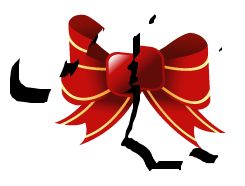 So I typically write about certain kinds of memories on this blog. Happy ones are a given. Awkward ones, sure -- if (and because) I've gotten over the shame. Sometimes I write about my life events in order to understand them or their place in shaping who I've become. Yada yada. This one? This one's not good, and I'm still not over it. But a dream prompted a memory, and the memory prompted this. I would say "enjoy," but that doesn't seem right. While this is certainly not the worst thing that's ever happened to me, it's still a dark cloud that hovers over my childhood.

When I was eight, as my family's car approached our house, I would pretend to be asleep. I always hoped my parents would be like, "Oh, she's sleeping!" and carry me from the car to the house. Being carried felt nice. Alas, my parents usually saw right through the charade, as I would only "fall asleep" when we were three blocks from home. Before that, I'd be wide awake and singing Christmas carols with altered lyrics, hoping to get some appreciative giggles out of someone in the car.

December 3, 1988, had been a long day. I'd sung with my childrens' choir at the Festival Of Trees that morning, chatted with one of Santa's elves, and admired the shiny trees. After the Festival, my parents had dropped my brother and me off at my grandma's house while they went Christmas shopping and had dinner out. It was their anniversary. Somehow that detail was important. It added to the irony or something.

We pulled into our garage and there I was, pretending to be asleep in the back seat. My parents, ignoring this, went into the house. They'll be back, I thought. I'll stay here for a few more minutes... they'll be back. They'll scoop me up and carry me up to my nice warm bed....

But that night, something was wrong. I could hear my parents' voices coming from inside the house. They sounded afraid. Abandoning my charade, I scrambled out of the car and hurried inside. Somewhere between the car and the kitchen, I heard the words, "We've been robbed."

In front of me was the kitchen window, which was wide open, the curtain rustling in the December breeze. In the dining room, a panel from the back door's window was broken. Upstairs, my parents' room was upset.

My mom and dad went through the house, looking for things missing, and I just followed numbly. The VCR was gone. The colorful blanket my great-grandmother had knit us -- gone. Upstairs, a drawer full of my mom's jewelry and keepsakes was gone. So was a pillowcase off the bed. That drawer had held jewelry, my brothers' and my meager savings, and a small collection of my baby teeth.

It was weird to think some jerk criminal now had my old teeth in his possession. My savings ($6 or so) could be replaced. My great-grandmother eventually knit us another blanket, this one in a "we-can-never-use-it" white color. The VCR was replaceable (even though they were still spendy then... a couple hundred, I think), but the VHS tape containing the just-recorded A Muppet Family Christmas that the robbers also got away with, was not. What kind of cruel beasts would take a little kids' Muppet tape?

A few things happened as a result of the robbery of '88. One, my dad went out and bought an alarm system, and there was a big to-do about that. The alarm would sometimes go off without any reason, so that was fun. Two, thereafter, every time I walked into the house from the garage -- especially if we'd been gone for several hours -- my eyes would go right to that kitchen window, to see if it was properly closed. Curtains rustling? Quick! Run around the house and look for missing objects! Aaauuughhh!! This paranoid routine went on for years.

I can't recall that I ever tried the back-of-the-car sleeping trick again. Innocence lost, or what have you.

I wish it ended there. I wish that there wasn't enough material to fill a second blog post. I wish we hadn't been robbed a second time, years later. I had nightmares for months. They've subsided, but I had one last night, which got me thinking about this memory.