When I Try To Be Helpful, Things Tend To Go Wrong: Part 3/3

So then there was the time I caused a massive sinkhole in my Grandma's front yard. 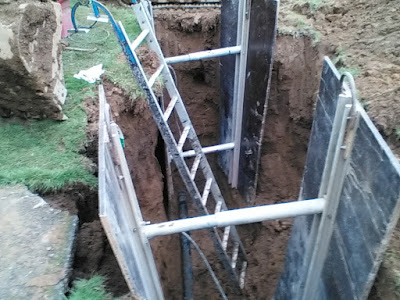 It was about a year ago. It was raining really hard that day. My uncle, who lived with my Grandma, had died unexpectedly a few days prior, and my mom and aunt and others had gathered at my Grandma's house to help with things. My mom had asked me if I would come over for a few hours to help with some sorting of papers. I agreed.

When I arrived, there didn't seem to be any place to park at first. Grandma's driveway was blocked by my uncle's trailer and another car, and the front lawn (where guests  often parked) had my uncle's truck and 2 other cars. There really isn't a shoulder on this street for parking, either.

I did see an open spot on her lawn, though. It was closer to the house, and could only be accessed by using the neighbor's driveway (which borders my Grandma's yard.) But I thought, hey, I need to park, and that's a nice spot! 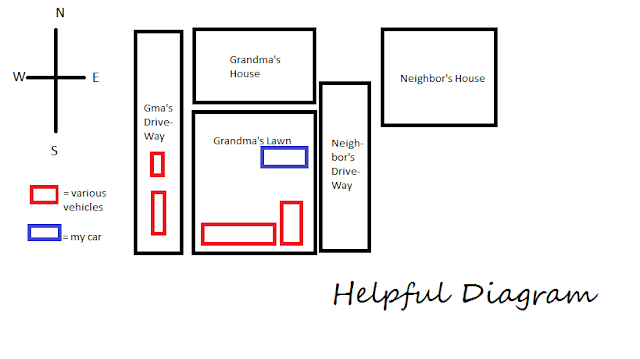 So I parked and went into the house to help sort the paperwork. An hour or so later, I was ready to leave. When I got to my car, I discovered it was sitting really low, as if a tire had gone flat. The driver's side door practically scraped along the ground as it opened. I got in the car and started the engine, hit reverse, and realized... I was stuck.

I got back out of the car. That's when I noticed the front tire had sunk about six inches into some mud, but worse than that, it wasn't just mud... it looked like water was draining down into it... as if it were a hole....

I went back inside the house and sheepishly explained the situation to some of my relatives. My mom's cousin hooked up my car to his with some cable, and said he could pull my car out... but I still needed to sit in the car and put it in reverse and give it some gas.

This I did, but all the while, I was imagining myself climbing into the car and then -- whoosh -- disappearing forever into the bowels of the earth, like that poor Floridian guy. My only hope was that at least (if that happened) my car was tethered to another car. Maybe I'd be able to climb out.

But huzzah, my car was freed and pulled out safely. Happy ending!

Over the next few weeks, we learned that a leak in my grandma's plumbing had actually caused all this erosion, causing this sinkhole to form. It turned out it was around eight feet deep. Left undiscovered for more time, the sinkhole could have expanded and swallowed up part of my Grandma's house's foundation... or someone could've been walking there and fallen in....

So the leak had to be fixed and the hole had to be stabilized and fixed, which cost a lot of money, and, naturally, I blamed myself because I was the dope who parked up far on the lawn, in the rain, whose car had gone in and started the whole thing in the first place. 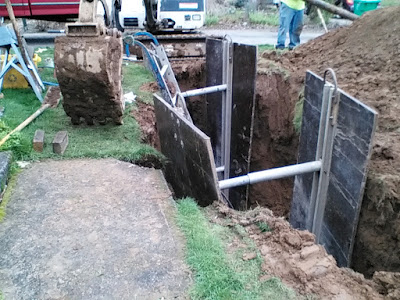 But you didn't cause the plumbing leak when you parked on the lawn, right? So by discovering the leak and the sinkhole it caused, you prevented some poor soul in the future (who, let's be real here, would probably have been you) from getting swallowed up in the earth never to be seen again! Good job, Mols. You saved a life.