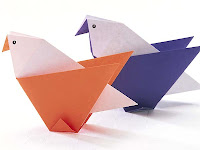 The summer I turned five, my family hosted two teenage exchange students from Japan. Their names were Yuko and Naomi.

At first, I didn't know quite what to think of these two visitors. They smelled different. They were different. They knew very little English, something which I had never encountered before. Over the years, my family had -- and would -- host a variety of visitors, but these girls were (pardon the pun) the most foreign of all.

One night during their stay, my dad decided to try to teach Yuko and Naomi a card game known in our family as "Knock" (but which my grandpa calls "Polish Poker." Who knows what it is.) It was simultaneously fascinating and frustrating trying to watch my dad explain the rules of this relatively simple game -- in English -- to two girls who barely understood the language. But bless them, they tried, and with much laughter, everyone finally got the hang of the game.

Another time, the girls -- along with other members of their exchange group -- put on a magic show. One of the tricks involved pouring milk into a newspaper -- and keeping it there. I mean seriously, no milk dripped out. I'm still wondering exactly how they did that!

I remember one day we all went up to Mount Hood and rode the alpine slide up at timberline. This was my first time on a ski lift. Another time, we went to the beach. There's a picture of me in the back of our car, leaning my head against Naomi's shoulder. We're both fast asleep. Suffice it to say, I got over my initial apprehension and became close to those two.

One thing that helped bring us all together was origami. I've always loved art projects, so when the girls showed me the fancy little papers and told me I could make them into shapes, I was all aboard with that idea. Except for one thing... I wanted to use scissors and tape on my projects. Yuko and Naomi and even my parents tried to convince me that origami did not require those tools -- only folding. Yeah, but every time I tried to fold anything, I wound up with a big wad of paper. But the girls were ever patient.

I suppose Yuko and Naomi are in their 40s now. I wonder if they ever wonder about my family? Have they ever been back to the U.S.?  Where have their lives taken them? Do they have children? Grandchildren? They could, you know... that was 25 years ago, I mean... anything's possible.